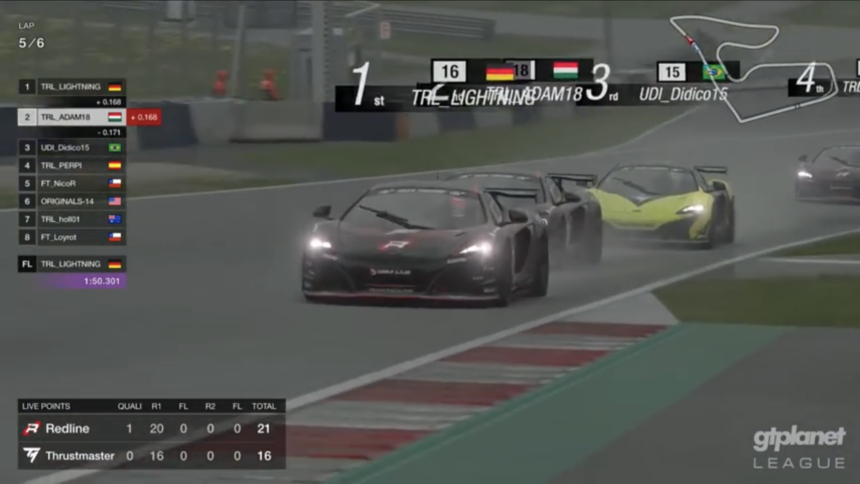 Two more enthralling matches have seen the teams book their place in the first GTPlanet League Final this weekend.

Top seed Team Redline and second seed Williams came through their races with the vital points required to meet and decide who’ll be the inaugural champion of GTPlanet’s team-based GT Sport esports competition.

If you’ve missed out on GTPlanet League so far, it’s a straight-up scrap between two teams of four drivers. Each position scores a point — eight for the win, one for last — so each place and each overtake is vital. There’s two races in each match, with the points for both added up, along with a point for qualifying on pole position in the first race and a point for the fastest lap in each race. A reverse grid second race shakes the order up, and all drivers use the same cars and tires, with no tire wear or fuel consumption.

To get here, the teams have fought each other through a round robin stage to get a ranking, and a seeding, for the semi-final races. These took place on Sunday October 13.

These two teams had gone through the round robin phase with very different fortunes. Redline was all-conquering, while Thrustmaster — despite counting the top-ranked driver Nico Rubilar (FT_NicoR) in its driver roster — was winless. Despite the on-paper gulf, only three points separated the two when they met back in September.

First blood duly went to the favorites. Mikail Hizal (TRL_LIGHTNING) and Adam Tapai (TRL_ADAM18) locked out the front row in qualifying at a wet Red Bull Ring, with all eight drivers in the McLaren 650S Gr.4 race cars, giving Redline the qualifying bonus point. Despite an early setback, with Adriano Carrazza (UDI_Didico15) jumping them both off the line, the duo regained their spots late in the race to take a 1-2 from Rubilar in third, and a healthy 21-16 point lead. 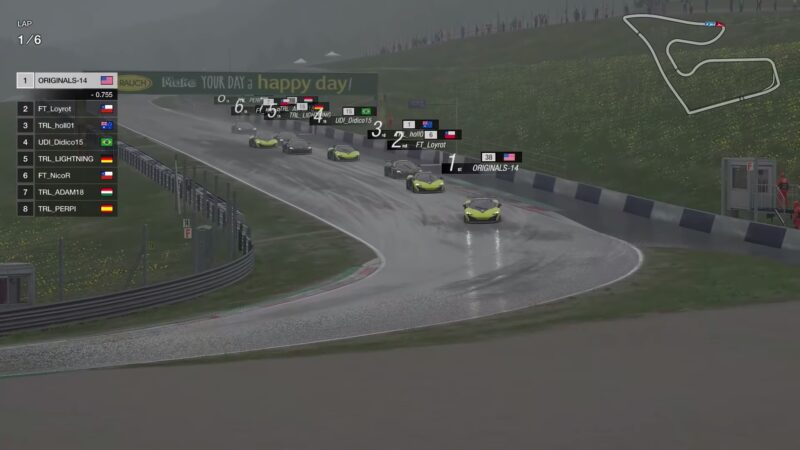 The second race proved incredibly action-packed. Daniel Holland (TRL_holl01) started from pole position, but quickly became the jam in a four-car Thrustmaster sandwich. However all eyes were on the fast-charging Hizal. Despite starting last, the German drove through the pack to join his Australian team-mate by half way. Some inspired moves, particularly at the final corner soon saw him take a lead he wouldn’t surrender, but the racing wasn’t done.

Holland had driven an intelligent race — letting Hizal through then riding his coat-tails to second — but a final lap contact with all four Thrustmaster cars saw him facing the wrong way. Tapai took advantage of the chaos and slipped between the green cars to hold a vital fourth place. That meant that although Thrustmaster took the race, Redline still won the face off. 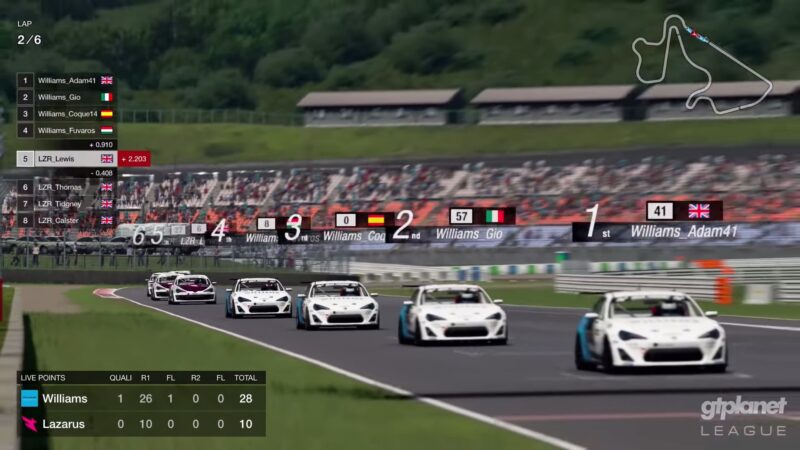 This was the match that had most expecting an upset. When the teams met in September only a single point separated them, and both teams beat Thrustmaster and lost to Redline. On paper, at least, this one looked to be the more exciting of the two matches. Williams had other ideas, and immediately blew any hopes of a duel out of the water.

An unprecedented qualifying performance saw Adam Suswillo (Williams_Adam41) take pole around the Autopolis course in the Toyota 86 Gr.4, with all three of his team-mates lining up directly behind him. Lazarus had to settle for the back four spots and hope for a Williams slip-up with the false start check. It never came; although Lewis Bentley (LZR_Lewis) managed to get alongside Patrik Blaszan (Williams_Fuvaros) at the start, it lasted for just the first sector. What followed was an incredible display of team driving, as the Williams crew simply drove away, line astern, more akin to a pursuit race in cycling.

That first race created something of a dead rubber for race two. With Williams scoring maximum points — Suswillo taking the win — and grabbing both the qualifying and fastest lap bonuses, Lazarus couldn’t overhaul the advantage. This wasn’t going to stop the team from enjoying it though, and the LZR crew — with the reverse grid giving it the top four spots — set about returning the favor. 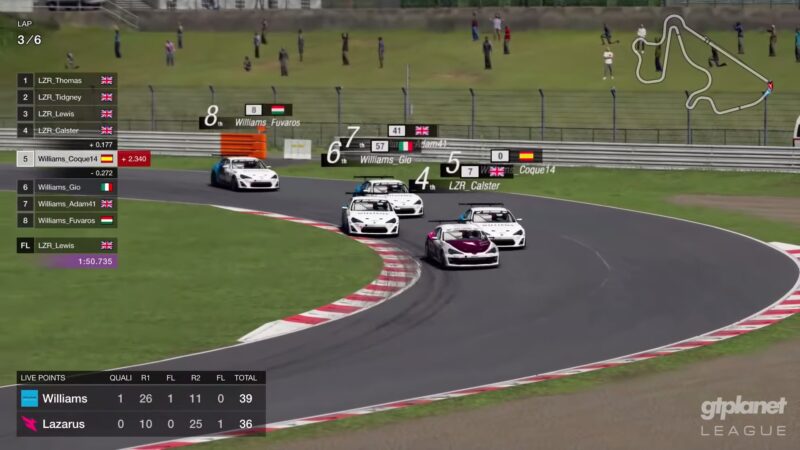 It was tough to resist the speed of the Williams team, but Callum Moxon (LZR_Calster) did just that. As his three colleagues built a lead, Moxon acted as rear gunner, keeping the entire team at bay for half the race. It was almost inevitable that the floodgates would open though, and they did on lap four. He’d done enough to prevent the team’s lead three drivers from being caught, as Matthew Thomas (LZR_Thomas) took the win, but the Williams margin of victory was the largest we’ve seen to date.

Williams and Team Redline will go into the live final, with the F1 team’s crew hoping for revenge after the round robin tie went against them. Before that, Lazarus and Thrustmaster will scrap it out to see who gets third place.

The races will take place on Sunday, October 20, starting at 1800UTC (convert to your local time here). We will again be streaming live on GTPlanet’s YouTube channel, so don’t forget to tune in!

Set a YouTube reminder for the live stream below: