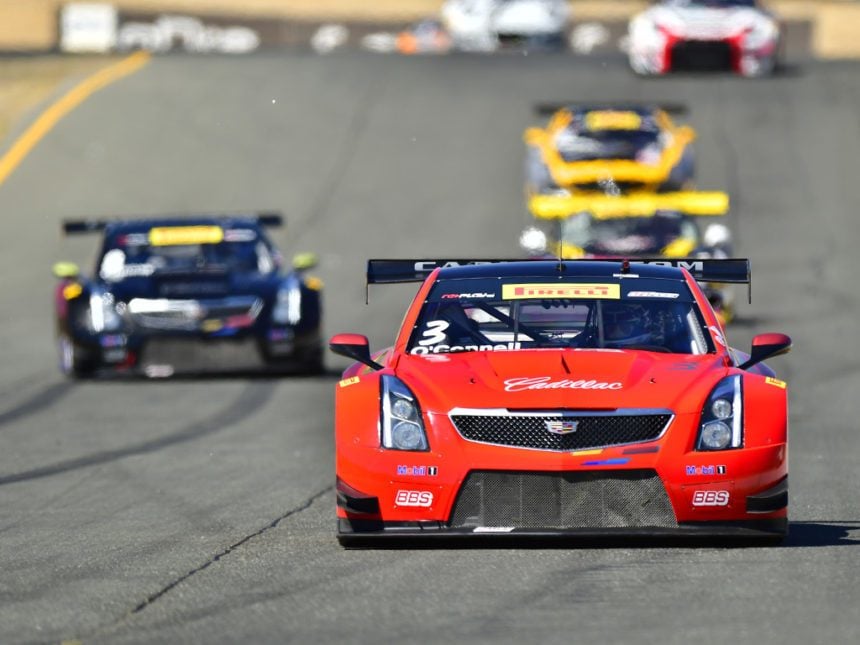 The penultimate round of the Pirelli World Challenge took place a few weeks ago at the sunny, rolling hills of Sonoma Raceway. Continuing a trend set by GT Academy grad Bryan Heitkotter at the previous race weekend in Utah, veteran GM racer Johnny O’Connell swept both races in California in his bright red Cadillac ATS-V.R.

To his credit, Heitkotter would place his #05 GT-R GT3 8th on the grid for the first race on Saturday. Qualifying would be a close fight, with the gap between Bryan and pole-setter Austin Cindric (#6 K-PAX Racing McLaren 650S) being less than half of a second. Teammate JD Davison would slot the other big Nissan in at 14th. Completing the front row was the always-consistent Alvaro Parente in another K-PAX machine, with O’Connell and Cadillac partner Michael Cooper locking out the row behind.

As the race got underway, it became clear Cindric would not have an easy win. While the high-school senior put in an exemplary performance, crafty veteran O’Connell stayed resolutely glued to the Macca’s tail for the entire race. With countless laps of Sonoma under his belt as an instructor, the 54-year-old pounced on the final lap of the race, slotting in under Cindric in the long downhill left of T6.

With his McLaren’s tail getting loose, Cindric would be unable to mount a response to O’Connell, who would go on to nab the checkered, making it his 60th win as a GM driver. As defending champion, the win moved him closer to the pointy end of the points table. Current points leader Patrick Long (#58 Porsche 911 GT3 R) would finish 8th, shrinking his points advantage over Alvaro Parente to only five (1461 playing 1456). Bryan Heitkotter would move up a spot from his starting position to take 7th, and teammate Davison jumped three positions to nab 11th. The top 10 for Round 18:

Sunday’s race saw the same three drivers starting up top (Cindric on pole with Parente beside; O’Connell behind Austin). Jon Fogarty would complete the second row, displacing Cooper in the second ATS-V.R to fifth. Heitkotter would again start 8th, and Davison moved up a row to 12th.

Apparently not content with having to wait almost the entire race to snap up the lead in the last round, O’Connell would nail the start and get the jump on both McLarens heading into the first turn. Once through, the four-time champion never looked back, scoring a decisive victory for the Cadillac crew.

Parente and Cindric would claim the lower two steps of the podium in McLaren’s name (second and third, respectively). Meanwhile, points leader Patrick Long made a stunning charge from his starting position of 14th to lock up 4th by the time the checkered flag flew. Heitkotter would round out the top five, with Lewis, Davison, Summerton (#66 DIME Racing Mercedes SLS AMG GT3), Thompson (#13 K-PAX Racing McLaren 650S GT3), and Kox (#34 RealTime Racing Acura TLX-GT) finishing in order behind him.

The dominance by O’Connell shuffled the championship points heading into the season finale. Parente’s constant presence in the top half of the standings each round contributes to his lead over the field. Only 2 points separate him and second-place Patrick Long, who won the very first race of the season.

Think that’s close? Tied for third are the two Cadillac pilots. While it’s technically possible for either O’Connell or Cooper to clinch the championship this coming weekend, it would require both of the drivers above them to score zero points.

Further down (and also outside of striking distance to those in front of him), Bryan Heitkotter sits at fifth in the season standings, with Ryan Eversley only two points behind. With Adderly Fong some ways adrift in seventh, the fight between the GT-R and TLX-GT will be one to watch in Monterey. The current top ten reads as follows:

The Pirelli World Challenge circus wraps up this coming weekend (October 7–9) at Laguna Seca. For the full details on the series, check out the official PWC site.

Bryan HeitkotterGT AcademyNismo AthletesNissanNissan GT-RPirelli World Challenge
The original comments for this post are no longer available.
Test Your Badge Knowledge With Our Car Logo Quiz

Automotive News 43 Jan 14 by Andrew Evans
Toyota has become the first brand to reveal its Le Mans Hypercar in full. Sticking with Toyota’s naming scheme for its World Endurance Championship vehicles, but shaking things up a…