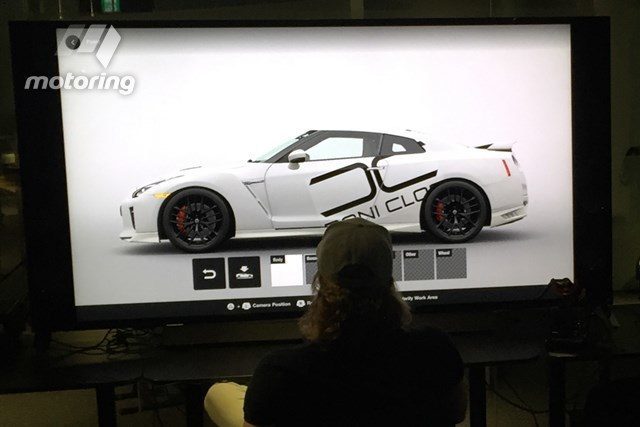 Recent social media posts hint that members of the press have recently got their hands on a new build of GT Sport.

Shared across Twitter and Instagram, the photos show players working with the title’s livery editor in sessions based in Polyphony’s Tokyo offices.

The Introduction of Custom Logos?

The various posts show journalists creating new liveries for the cars in GT Sport. For the most part we’ve seen these screens before but the logos used for the liveries are interesting.

The Tweet above, from Michal Pisarski, shows an “Onet” logo as part of the editor. Onet is a Polish a news and technology website, for which Pisarski is a writer. It seems like an odd brand to include in a GT Sport sticker pack, yet Pisarski is clearly seen applying it to a Nissan GT-R GT3.

A second image, uploaded by Men’s Health Poland, shows a similar situation with the Alfa Romeo 4C. Again, this is neither a motorsport nor gaming brand, but its logo is available in the editor.

This, and the fact that the logos don’t seem to be at the quality of other logos we’ve seen hints at a new feature – an image import tool. A closer look at the UI reveals an unlabelled button second from left – could this be the import function?

Of course, this is no smoking gun for an import tool. Polyphony could have manually inserted these for the sake of the preview. As it currently stands, we still understand very little about the livery editor.

We’ll keeping an eye out for further information on the livery editor in the coming weeks. According to a Tweet by Pisarski, an embargo is due to expire on Friday.

With the October release for the title fast approaching though, we can expect to learn more.

Livery Editor
3669 Comments Discuss this post in our forums...
Can You Beat the Impossible Gran Turismo Quiz?

Gran Turismo Sport 1662 Feb 17 by Andrew Evans
GT Sport‘s first World Tour event of the year is still fresh in our minds, but already it’s time to prepare for the next stage. The Pre-Season for 2020 FIA…

Gran Turismo Sport 636 Feb 17 by Andrew Evans
This week’s GT Sport Daily Races will take you to some tight and twisty real world circuits, in the UK and Japan. The UK’s representative is Brands Hatch for Race…

Gran Turismo Sport 230 Feb 15 by Andrew Evans
Polyphony Digital has revealed another new car on its way to GT Sport soon, and it’s a vehicle with quite some history. Aston Martin’s DBR9, a GT1-class race car that…