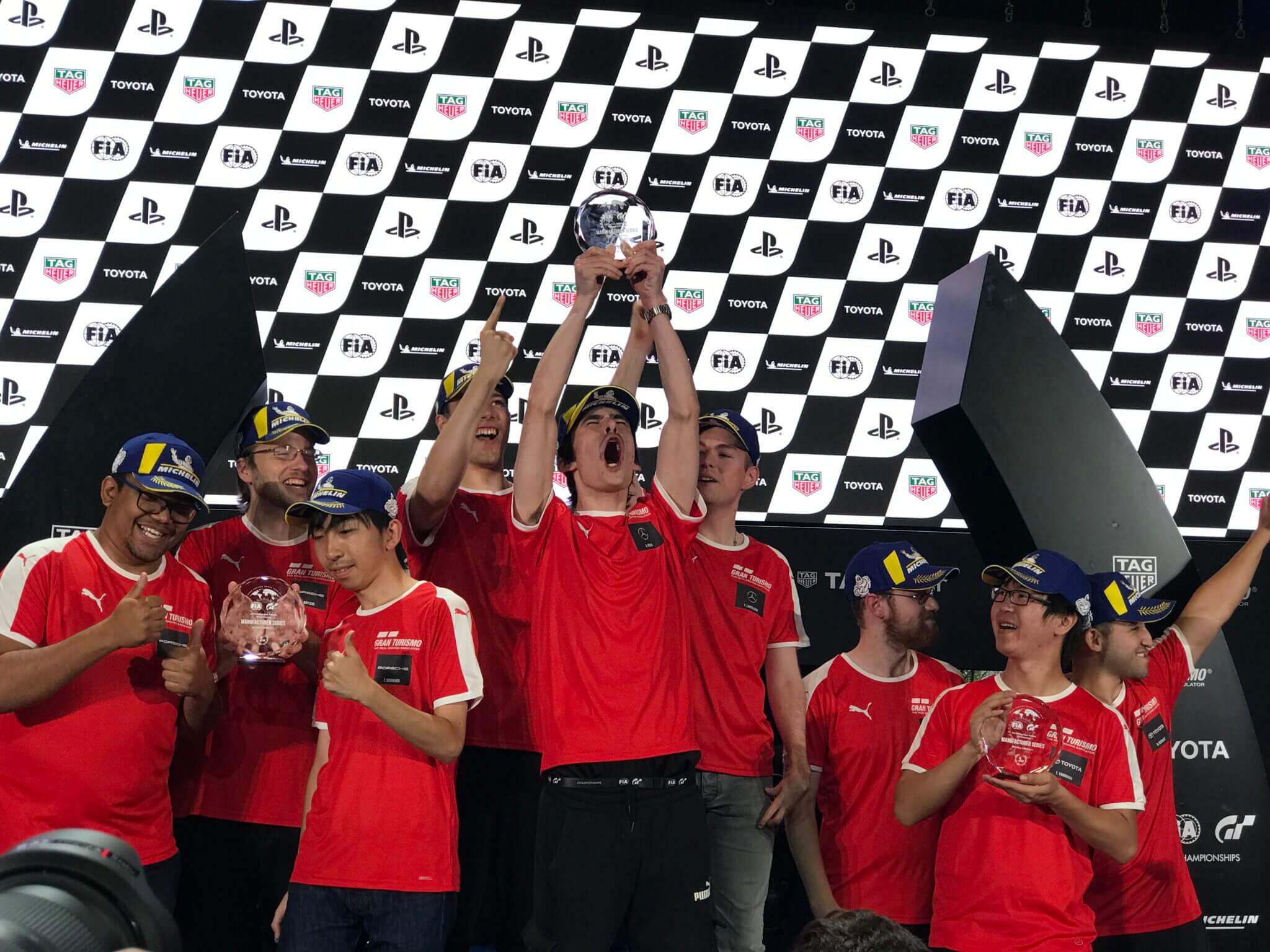 Mercedes-Benz has become the first team to defend its Manufacturer Series win, following up New York’s crown with a second victory in Salzburg.

The team, made up of Anthony Felix (USA), Tom Lartilleux (FRA), and Cody Latkovski (AUS), took a comfortable win in the end, in a new race format for the Hangar-7 event.

Rather than the four-race contest we’ve seen before, with each of the three drivers racing once and a final endurance race with all of them, the drivers in Austria only drove two races. Each was a team event, with all three drivers required to put in some seat time in each.

The racing action followed on from a qualifying session earlier on Friday. This took place at the wet version of Red Bull Ring and that immediately showed up some differences in the two Gr.3 car layouts. It seemed that the way to go was with the mid-engined cars, rather than the front-engined versions, although the Mercedes appeared to buck that trend.

Usually a tightly packed affair, qualifying this time spread the cars out. The Mercedes lead the way, while Jaguar just missed out on the top six superpole shoot-out with a time some 1.2s slower.

The six-car superpole swung back into the MR cars’ favor. On an even wetter track, Audi came home to take the pole position, ahead of Peugeot and Porsche. 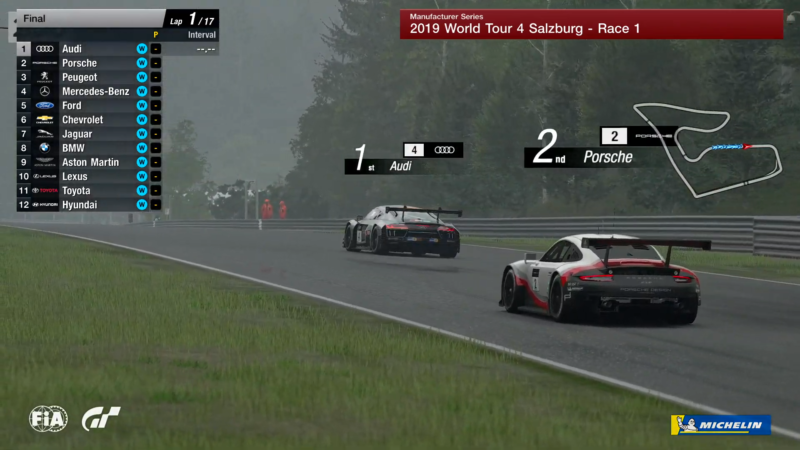 Despite the potential for some tricky driving, initial exchanges were very circumspect. Adam Wilk, driving the Ford GT, managed to jump Tom Lartilleux to move up into fourth, but the front three were in danger of simply disappearing down the road, dragged along by Martin Grady in the Audi R8.

Toyota was the first team to stop, with Simon Bishop deciding he’d had enough of the rain and handing the car over to Tomoaki Yamanaka after just two laps. It would be another three laps before anyone else chose to do the same, with Aston Martin and Hyundai both heading in at the end of lap five.

Meanwhile Lartilleux had righted the earlier wrong. In a thrilling three-corner long move, he put the Mercedes back past Wilk’s Ford to recapture fourth place. Up at the front, Porsche opted for a sixth lap driver swap, with Tatsuya Sugawara handing the keys to Daniel Carmo. That gave Grady a 2.5s lead at the front.

With almost half the race under his belt, Frenchman Lartilleux pitted the Mercedes to put Cody Latkovski into the driving seat. Grady followed on the next lap for Hayden Hunter to take a stint, leaving Lewis Bentley to lead in the Peugeot — yet to pit after nine of the 17 laps.

Indeed it took another two tours for the Brit to relinquish control of the French car, coming in at the end of lap 11 to hand the reins to Takuya Okamoto. Interestingly, Porsche followed them straight in and opted not to take tires.

Audi was the next to dive in for a second stop, and very quickly the three lead cars — Okamoto in the Peugeot and Zach Pettinicchi in the Audi, along with Latkovski still in the Mercedes — were on the same piece of road. A mistake by Pettinicchi under braking saw the Audi tap the Peugeot and suddenly the three lead cars were covered by just two-tenths.

Latkovski soon swept into the lead with a move lasting three corners, but the three-car tussle — with the Mercedes and Peugeot yet to pit for a second time — was bringing Tristan Bayless back into play in the Porsche.

Another no-tire stop, this time for Mercedes, saw Anthony Felix get back out of the pits just 1.2s behind the Porsche and with two laps left to make a play for the podium. Okamoto followed suit at the last possible moment — the end of lap 16 — to hand over to Richard Castro, and the four cars faced a 100-second dash to the finish.

Bayless made his attempt into the Schlossgold corner, but Pettinicchi held his nerve to keep the Audi on the inside for Rauch. With no further big braking or acceleration zones to make the difference, that’s how they finished, with Audi taking the race win from Porsche, Mercedes-Benz in third and Peugeot fourth. 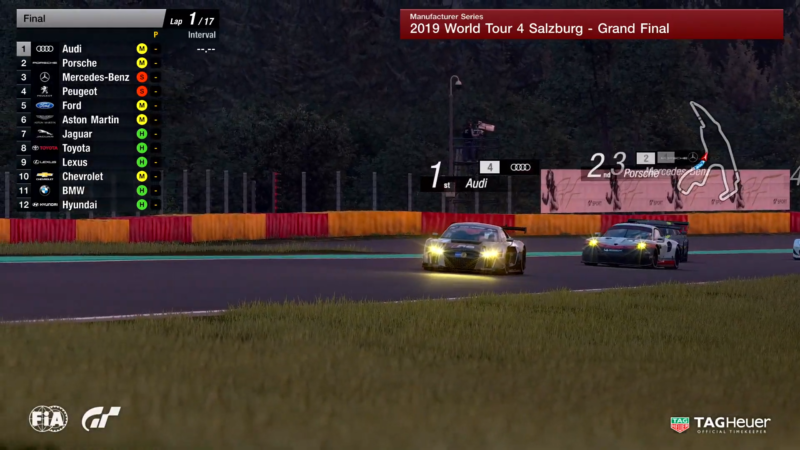 For the second tour event in a row, the action moved to Spa for the decider. Here the teams were fighting for double points, so in theory anyone could still win it.

However that immediately became anyone but Peugeot, Lexus, BMW and Hyundai. Bentley, driving the Peugeot, had started on stickier soft tires like Lartilleux in the Mercedes, but unlike the French driver, the French car couldn’t make a move through La Source stick. This left him behind the Porsche 911 of Bayless and, as the cars crested Raidillon, the Peugeot broke loose.

Smashing into the barriers on the right side of the track, the RCZ became a billiard ball. Baptiste Beauvois in the Lexus arrived on scene to find a Peugeot pointing right at him, with obvious results. Soma Iseri in the BMW found the same situation, only with two cars blocking the track.

Meanwhile at the front Mercedes had made the tire advantage work. Lartilleux slipped past Pettinicchi’s Audi to take the lead, dragging the 911 along with him. Jaguar opted for a very early pit stop to shed the sluggish hard tires — still exiting ahead of the backmarking quartet after that first lap incident.

There was soon a train forming behind the third-placed Audi, with Aston Martin, Ford, Chevrolet, and — on hard tires — Toyota lined up within two seconds of the R8. More importantly, this was allowing Porsche to pull clear ahead, and the Mercedes on soft tires was streaking into the distance.

Toyota followed suit in divesting itself of the hard tires, coming in at the end of lap four for mediums and a dash of fuel. Much to Aston Martin’s relief, the Audi dived in two laps later for some new soft tires. This released the train from the R8’s back bumper.

The bulk of the field started to come in around half race distance, and it shook the order up somewhat. Despite pitting with a 7.5-second lead over anyone else, Mercedes came out of the pits in fourth just about a second behind the Audi and Aston Martin. The difference here was simply fuel load: the Mercedes team decided to fill the car up to the end of the race, while Anthony Felix did a short stint on the hard tires.

At the front the gap from Porsche to second — Audi — was enough for the team to pit without losing the lead, while Felix in the Mercedes effectively drove an out/in-lap, coming in to the pits on the same lap he left them to ditch the hard tires. Although leading the two-stop cars and with star driver Cody Latkovski on board, the team was now in eighth.

This section of the race proved a flurry of pit stop activity. Porsche followed Mercedes’ lead and pitted after a very short stint for softer rubber. Oddly, Audi decided to go the other way around and picked hard tires for what seemed to be the last seven laps.

That wasn’t Audi’s ultimate plan, as the crew pitted again for another set of soft tires. The result was that the team who’d started on pole were in 11th and some 30s down on the lead. However Mercedes had regained the lead with all the extra pit stops ironed out.

A strong performance from Jaguar was starting to come undone. The Toyota team caught and passed the F-Type on lap 14, for a fourth on the road and effective third. It only took Toyota driver Yamanaka another lap to pass countryman Sugawara in the Porsche to move up into effective second.

However, no-one could do anything about the Mercedes. Latkovski coasted to the checkered flag, from Toyota some eight seconds back in second and Porsche a further two back in third. That gave Mercedes the overall title but, even with double points, wasn’t enough to switch Toyota and Porsche. It was a German 1-2, with Toyota rounding out the podium.

Andrew Evans · Sep 13, 2019· Comments
The United Kingdom’s James Baldwin has taken the gold medal in the esports discipline at the FIA Motorsport Games, to give the country its first ever category gold.

Andrew Evans · Sep 13, 2019· Comments
The FIA Motorsport Games will crown its esports champion today, with the semi-finals and final taking place live from the Mistral Hall at Circuit Paul Ricard.

Andrew Evans · Sep 13, 2019· Comments
The world’s best virtual racers will be gunning for the medals in the FIA Motorsport Games Esports event over the next two days, starting with the quarter-finals on Friday October 28.

Andrew Evans · Sep 13, 2019· Comments
After six months of racing, the final six competitors in the 2022 Ferrari Velas Esports Series have gathered in Maranello for the Grand Final, which will broadcast on Sunday October 2.

Andrew Evans · Sep 13, 2019· Comments
The 2022 Ferrari Velas Esports Championship is now down to its final six drivers after two evenings of racing in the Regional Finals.

Andrew Evans · Sep 13, 2019· Comments
Half of the names heading to the 2022 Ferrari Velas Esports Championship Grand Final are now locked in, and today’s North American Regional Final is set to decide the remaining racers.