Mercedes-Benz has just announced a new Gran Turismo 5 contest (for UK residents only) featuring former F1 star David Coulthard. The contest starts out with a familiar formula: 24 entrants will be chosen at random, then brought to Mercedes-Benz World where they’ll be tested in real and virtual driving challenges to determine the top 6 contestants. 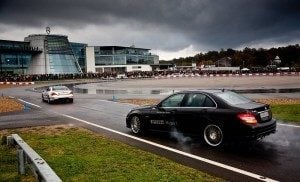 Next, things take an interesting twist: the top 6 move to the final round to compete directly against David Coulthard. They’ll be setting laps in the game while David is in the same car, on the same track, at the same time in the real-world, trying to best their times. Even if no contestants are able to beat David, the fastest among them will still go home with a nice prize: an all-expenses paid trip to the 2011 Formula One Brazilian Grand Prix with four-star accommodations.

The details of how the final stage will play out are sparse, but it will be streamed live over the Internet for the world to watch and play along on September 5, 2011.

Mercedes is not revealing the circuit which will hold this competition, describing it as an “undisclosed location”. That said, I can confirm it will be held on a circuit that’s already featured in the game, so don’t get too carried away with speculation!

To enter the competition, head on over to the contest’s official web page (entries close August 22, 2011). It’s open to UK residents over 17 years of age – the rest of us will have to stay tuned for the video stream of the finals, which I’ll be sharing here on GTPlanet’s blog when it goes live next month.

Good luck to all GTPlanet participants! Thanks to Pete for the tip.

Andrew Evans · Aug 8, 2011· Comments
It may be cracking on for a decade old now (yes, really), but Gran Turismo 5 still has a few secrets left to give.

Andrew Evans · Aug 8, 2011· Comments
The Gran Turismo world may be all about GT Sport and esports, but an older title is enjoying a second lease on life right now.

Kyle Patrick · Aug 8, 2011· Comments
No, your eyes do not deceive you. We’re talking about a game that’s fast approaching its ninth birthday. That’s because, thanks to a recent discovery in the community, it’s suddenly gained a huge number of tracks.

Jordan Greer · Aug 8, 2011· 49 Comments
When looking at the GT franchise as a whole, critics frequently rate the most recent games – GT5 and GT6 – as the least successful in the series’ history, for a wide variety of reasons. Those critics might be surprised to find that Kazunori Yamauchi actually agrees with them.

Jordan Greer · Aug 8, 2011· 30 Comments
When Gran Turismo 5 was released, something unusual in the game’s Kyoto Photo Travel Location caught the attention of our community: a curiously detailed little cat. He blinked, turned his head, looked around, and generally drove people crazy.

Michael Leary · Aug 8, 2011· 61 Comments
In a surprising turn of events a new update is available for Gran Turismo 5, version 2.17. This update modifies the game so that it is no longer necessary to connect to the discontinued online servers in order to download previously purchased DLC packages.

Jordan Greer · Aug 8, 2011· 122 Comments
One final update for GT5 has been released, version 2.16. This update modifies the game to function without connectivity to online services, which have now been discontinued.