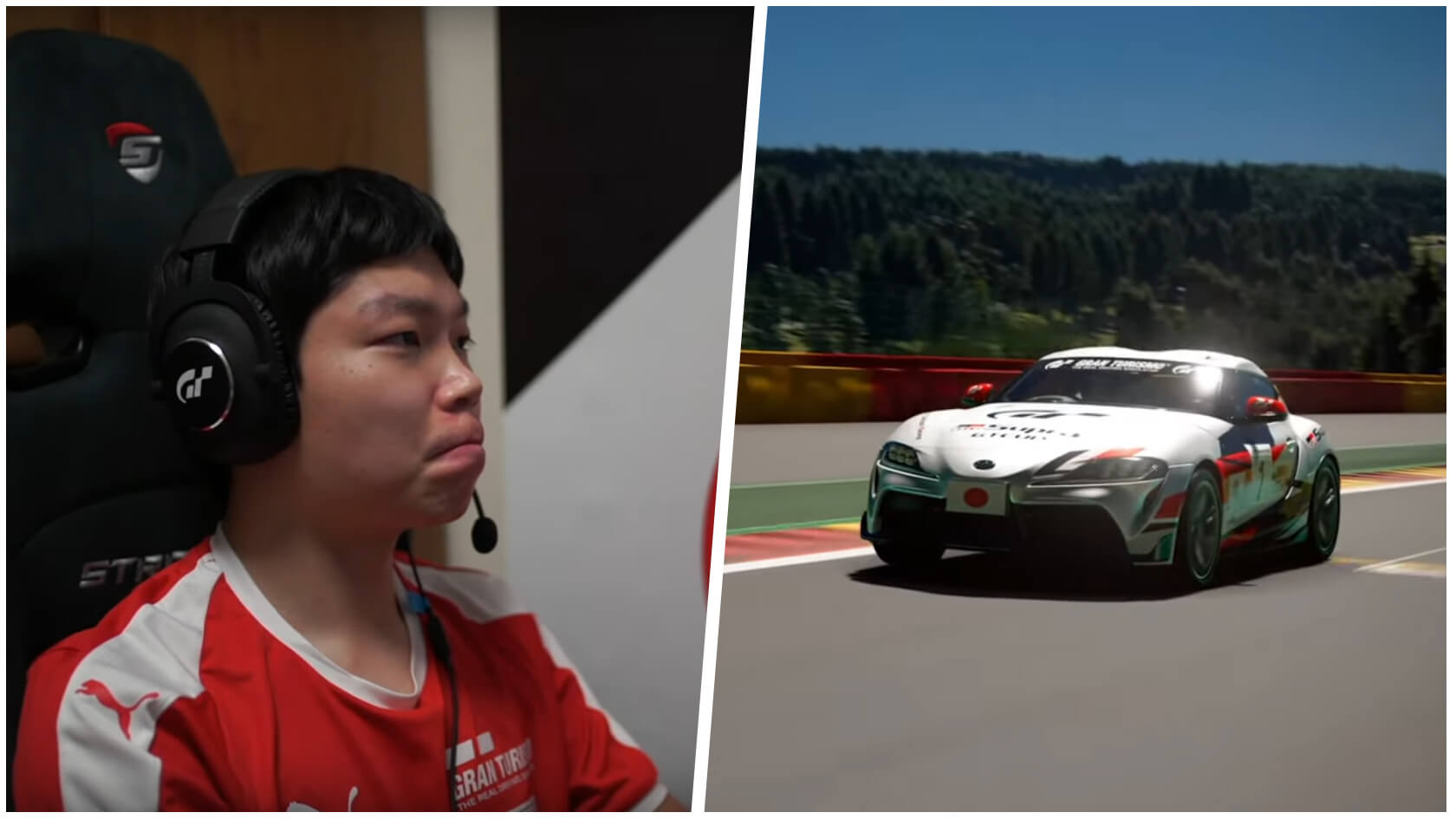 Japan’s Takuma Miyazono has kept up his 100% record in Gran Turismo’s live online events this year, taking the win in the 2020 Toyota GR Supra GT Cup.

Miyazono came out on top after another fine drive, mixing speed and tactics, in the final race of the championship, but the day didn’t necessarily start out all that well. The pre-event favorite was only able to qualify in fourth for his semi-final, behind newcomer Jin Nakamura on pole, Lucas Bonelli, and Tomoaki Yamanaka.

A largely quiet race at Fuji sprang into life on the last lap. Having lead throughout, Nakamura lost the lead to Bonelli, but fought back with a late — and ultimately determined unfair — lunge into the Dunlop Chicane. As the two were scrapping, Yamanaka sneaked through into the lead.

With the lead three taking up most of the road, Miyazono found his path blocked, allowing Cody Latkovski to get past. A late penalty for Nakamura dropped him out of the top six altogether, eliminating him from the event and allowing Angel Inostroza to qualify for the final, just behind Mamoru Okada. 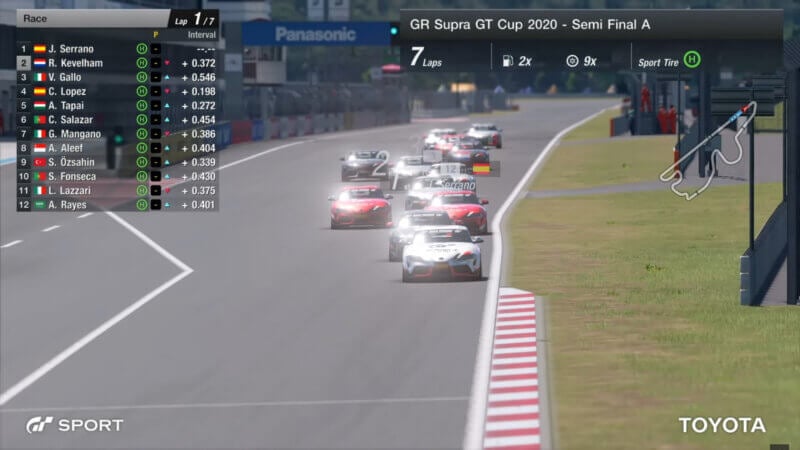 The other semi-final was a hard-fought but ultimately consistent race from all involved, and despite threatening in places didn’t manage the same sting in the tail. Spain’s Jose Serrano lead a lights-to-flag win, despite race-long harrying from Rick Kevelham. Valerio Gallo put himself into the mix with a daring pass in the final turn, but missed his braking point for the subsequent first turn and had to settle back into third.

That lasted until the last lap when European champion Coque Lopez, the only man really on the move, slipping past him to take the podium spot, dropping Gallo back into fourth. Adam Tapai and Giorgio Mangano, though busy, had a relatively quiet race to take the final two qualifying spots.

Having won his semi-final, Serrano brought his form through to the final too, setting pole position at the Spa circuit, ahead of Miyazono and Bonelli. With the lead trio all starting — and a rare standing start at that — on soft tires, they quickly dropped the pack in the opening stages of the race but kept station. 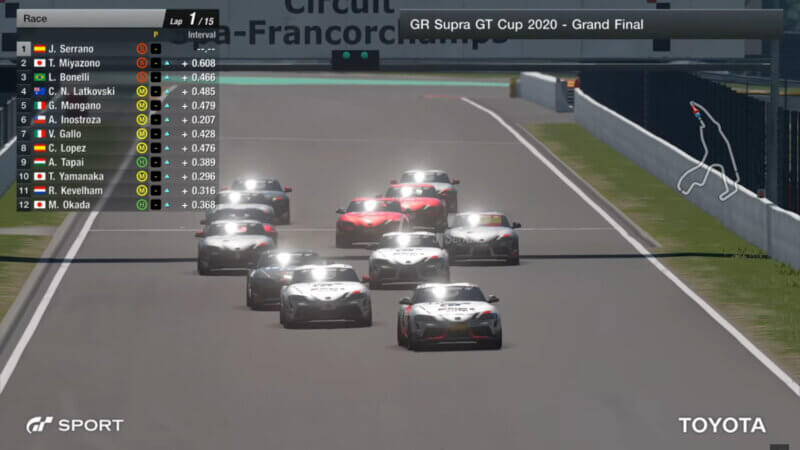 This was where Miyazono’s tactical vision started to come to the fore. As the lead trio pitted to change from the softs, Miyazono was the only driver to switch to the hard tire. Keeping that for just two laps, he was able to stay within touching distance of Serrano and Bonelli before diving in for the last required set, of medium tires.

As the last lap started, Serrano finally pitted for the final required tire set. That left Miyazono to inherit the lead, but that on its own wasn’t enough to win the title. Crucially Serrano, who’d been the leader of the trio throughout and unable to fuel save, had to take on board a very small amount to get to the finish and that shuffled him back into third.

That was enough to leave Miyazono and Bonelli tied on points, and, due to his better result in the final, give the victory to Miyazono. Serrano was third overall, a single point further back, after leading almost every lap of the event.

With that win, Miyazono has set out an early marker for the 2020 Nations Cup. 2019’s Supra Cup winner Mikail Hizal went on to achieve the double. We’ll have to wait until Sunday to find out if he can repeat that feat.

Andrew Evans · Dec 18, 2020· Comments
Michelin, official Tire Supplier and Technical Partner of Gran Turismo, is staging a special online competition for players in south-east Asia and Oceania, with an all-expenses paid experience at Yas Marina, Abu Dhabi, for the winner.

Andrew Evans · Dec 18, 2020· Comments
A new set of Gran Turismo Sport Daily Races is now available, with the unannounced change to a four-weekly cycle now seemingly the standard from this point forward.

Andrew Evans · Dec 18, 2020· Comments
Following on four weeks from the last set, a new set of Daily Races is now available in Gran Turismo Sport as players get used to the new scheduling for the 2017 title.

Andrew Evans · Dec 18, 2020· Comments
For the first time in nearly a month, there’s a new set of Daily Races in Gran Turismo Sport for players to enjoy for the foreseeable future.

Andrew Evans · Dec 18, 2020· Comments
It’s the inevitable fate of any game that, once it is succeeded, it will eventually wither away as support is withdrawn. While this process usually takes months at a minimum, GT Sport seems as if it could be sidelined in record time.

Andrew Evans · Dec 18, 2020· Comments
Despite being superseded by Gran Turismo 7, GT Sport’s Daily Races seem to be continuing on their weekly cycle — for the time being at least.

Andrew Evans · Dec 18, 2020· Comments
Although Gran Turismo 7 is now out, GT Sport shows no signs of slowing down any time soon, with a new set of Daily Races now available to players.

Andrew Evans · Dec 18, 2020· Comments
Gran Turismo Sport will finally be superceded by Gran Turismo 7 this week, but there’s still plenty to be getting on with in the current title — starting with a new set of Daily Races.