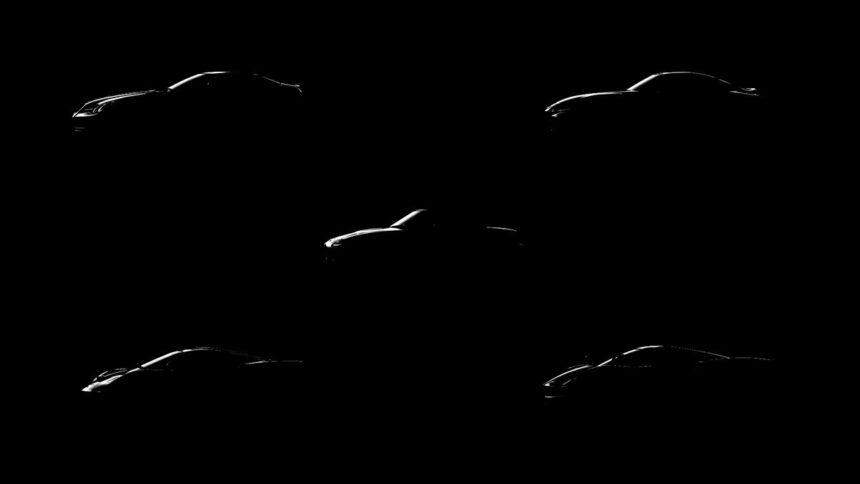 The Polyphony Digital studio head posted the Tweet earlier this morning. As usual it contains not only the date for the update, but some of the contents in a lightly disguised fashion.

With five vehicles included it’s a slightly smaller update than we’ve seen in the past — previous updates have averaged around eight cars. There is, as is also usual, no mention of any other content — such as tracks — for now:

Some of the shapes are slightly more obvious than others. The top-right car, for example, is one of the most-anticipated cars of 2019: the Toyota GR Supra. Toyota only officially revealed the car in the real-world in January, so it seems likely that the Polyphony Digital team have had considerable access to the vehicle before the rest of the world.

Also appearing in the car pack are the Mercedes SLR McLaren and what appears to be the McLaren F1 GTR. The last car seems to closely resemble a Pagani Huayra. But it’s not all about outright speed, as the car in the middle of the shot is the first generation Eunos Roadster, better known as the Mazda MX-5, which is celebrating its 30th birthday this month.

Content updates typically also bring a new circuit and, to expand the campaign mode, a Circuit Experience guide to the previous update’s track. However, as that was Special Stage Route X, an 18-mile oval with no braking, it’s unclear as to whether that will apply this time.

It’s likely the update will also bring more events to GT League, and further Scapes to suit our shutterbugs.

As is always the case, the update will arrive after a short period of online maintenance. Players will lose the ability to save their game during this time and until they install the update. You will need to make a manual save from the top menu well in advance of this to ensure you don’t lose any progress.

Gran Turismo Sport 487 Jun 14 by Andrew Evans
The latest round of Gran Turismo Sport Daily Races has arrived and this week players will be heading to two of the world’s most famous racing circuits, and a staple…

Gran Turismo 7 138 Jun 11 by Andrew Evans
It’s hard to believe, but it’s now a full calendar year since Sony opened up its Future of Gaming event with the full reveal of Gran Turismo 7. With 12…

Gran Turismo 7 1072 Jun 8 by Andrew Evans
In case you missed the major news of last week, it appears that there’s a very real possibility that 2022’s Gran Turismo 7 will release on PlayStation 4 as well…