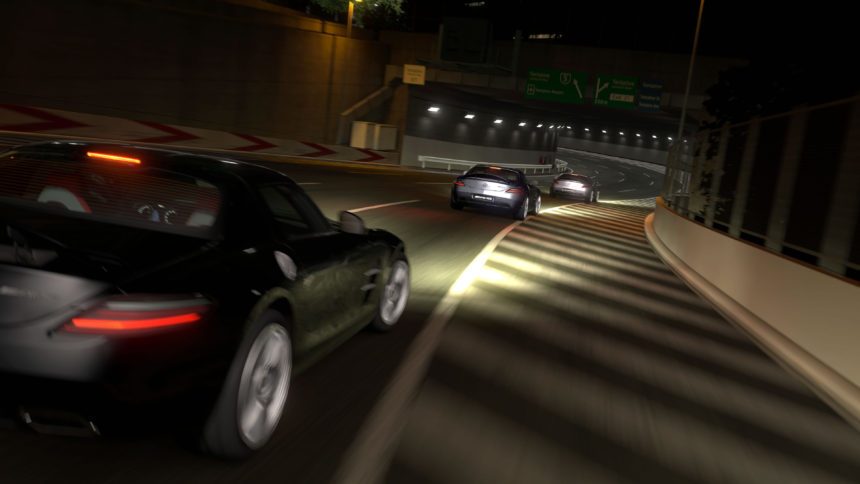 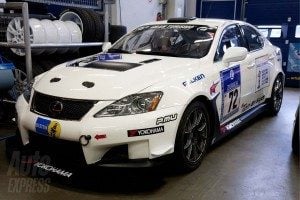 There’s some good news confirmed in a new article from Auto Express – a “secret” demo was apparently at last weekend’s 24-hour race, which showed the Green Hell at night. They were also able to confirm that the race-spec Lexus IS-F which Yamauchi drove in the event will be included in the game:

The V8-powered saloon will appear in the new game – which Owen got to try during the event. Our man took the controls of a Sony PlayStation 3 to sample the complete Nürburgring 24 Hours circuit – for the first time in video game history. And he even got to try the new night racing feature.

Plus, for the first time, gamers will be able to fully experience the Nürburgring, recreating the 24 Hours race, which uses both the grand prix track and the 15.2-mile Nordschleife. The latter – dubbed Green Hell – can also be driven at night, to get an idea of what the pros go through during one of the world’s toughest races.

The article still does not confirm a dynamic, changing day/night cycle, and it’s interesting that they specified only the “latter” circuit, or the Nordschleife, can be driven at night. Hopefully we will know more details soon. Thanks to Krymzen18 for the tip!

Lexus IS-FNight RacingNurburgring GPNurburgring Nordschleife
The original comments for this post are no longer available.
Test Your Badge Knowledge With Our Car Logo Quiz

Gran Turismo Sport 3769 Apr 14 by Andrew Evans
With a week to go until the racing action gets underway, Polyphony Digital has announced the full schedule for the first round of this season’s FIA Gran Turismo Online Championship.…

Gran Turismo Series 44 Apr 12 by Andrew Evans
As players are waiting for some good news around PlayStation 5’s Gran Turismo 7, a development over the weekend could mean that Gran Turismo will also head to the world…

Gran Turismo Sport 534 Apr 12 by Andrew Evans
A new week means a new set of GT Sport Daily Races to get to grips with, and this week’s trio of events brings a mixture of pace to satisfy…

Gran Turismo Sport 3769 Apr 5 by Andrew Evans
As well as announcing the new format for the 2021 season of the FIA Certified Gran Turismo Online Championship, Polyphony Digital has also revealed the largest expansion in eligible players…

Gran Turismo Sport 3769 Apr 5 by Andrew Evans
Kazunori Yamauchi has taken to the PlayStation Blog to announce a new-look format for the upcoming 2021 FIA Certified Gran Turismo Online Championship, the fourth season of the flagship esports…