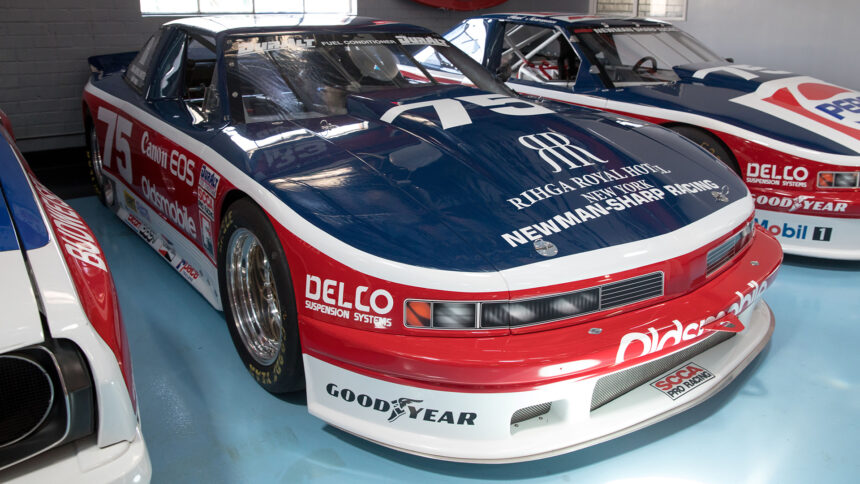 This 650hp Oldsmobile Race Car is Coming to Forza Motorsport 7

The race car lineup of Forza Motorsport 7 looks set to increase by at least one. At least, that’s what Matt D’Andria is hinting at.

First, a bit of background. D’Andria is the co-host of CarCast, an automotive podcast that also features Adam Carolla and Bill Goldberg. While they’re all petrolheads, it’s Carolla that has the most drool-worthy lineup of race cars. Becoming something of a Paul Newman collector, Carolla has worked closely with Forza developer Turn 10 Studios in the past to digitize numerous cars the Cool Hand Luke star had driven during his life (Newman passed away in 2008).

Currently, there are two Newman race cars in FM7, both from Bob Sharp Racing: the 1979 Datsun 280ZX Turbo and 1988 Nissan 300ZX. D’Andria took to Twitter earlier today to essentially confirm a third car will join them, and it won’t be a Japanese model:

Did you know that you can drive two of @adamcarolla’s Paul Newman race cars in @ForzaMotorsport? Could the Newman Oldsmobile V8 Cutlass be next 🤷‍♂️ pic.twitter.com/WvkuT7sJh6

In 1990, the Oldsmobile Cutlass ran a monster 650hp V8, but Newman and teammate Scott Sharp couldn’t put a dent in the dominant Chevy Beretta of Tommy Kendall. A win at Detroit for Sharp was the only one for the Newman-Sharp team that season, the last before it closed its doors in 1990.

As for when gamers can expect it? It could be a while. Digitizing a car typically takes at least half a year, so we don’t exactly expect the Cutlass to drop in this Friday’s episode of Forza Monthly. With it looking like there won’t be a Forza release in 2019, the most likely scenario is the Cutlass eventually showing up in FM7, not its sequel.

Plus, given its race car status, it doesn’t seem like a candidate for whatever Forza Street might be, if it’s anything at all…

Forza Motorsport 7 Car List
31 Comments Discuss this post in our forums...
Can You Beat the Impossible Gran Turismo Quiz?