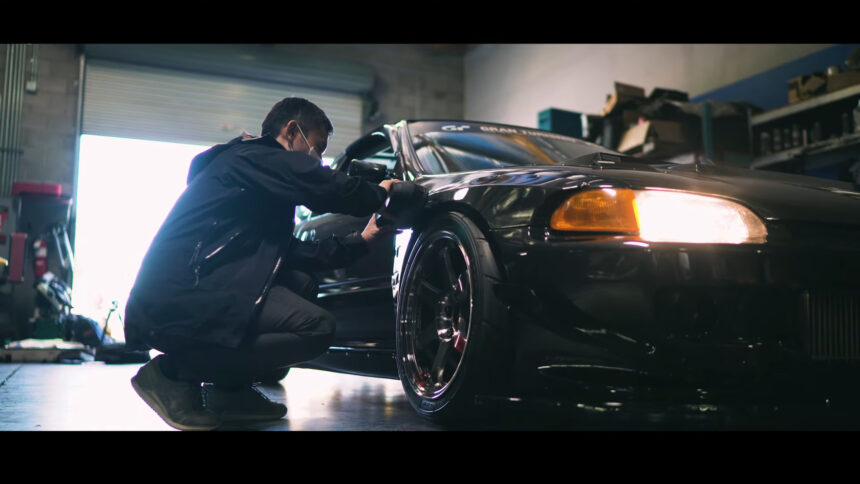 We’re always excited when any new car is making its way to Gran Turismo. When it’s a SEMA GT Award-winner, it’s even more exciting. These are cars which aren’t just some stamped-out piece of metal or carbon-fiber, but unique pieces of automotive art made with a passion by a small group — or even just one person.

When we heard the Gran Turismo team had been to scan Phil Robles’ 2017 Gran Turismo Award-winning Honda Civic, we were suitably gleeful. Now, with a new video, we can actually see the process of scanning the car taking place.

In the video below you can see the Gran Turismo team getting to work scanning the car for inclusion in what Robles termed “an upcoming release”. It’s a rather intricate process, which involves close-up photography of details and the team filming the car’s lighting — including the AIM MXL2 datalogger instrument panel.

That’s followed by a laser scan of the vehicle exterior. Along with taking body measurements, we also see one crew member scanning areas of the bodykit and creating a 3D representation live on a tablet device.

In many ways, this Civic represents the old-school of Gran Turismo. The 1992 Civic started out pretty much stock when Robles picked it up in 2006 for some amateur racing. That’s by and large how most of us kicked off our careers in Gran Turismo 1. From there he’s tweaked it somewhat.

Aside from the Rocket Bunny Pandem widebody kit, which pumps the car’s width up by some four inches, the EG Civic now also sports a turbocharged K24 engine. This is good for 394hp, and 323lbft of torque. That’s mated to a Quaife sequential gearbox and a limited-slip differential.

Robles will no doubt be even happier that the car is now digitized, as it means he can get back to racing it!

Gran Turismo AwardsHondaSEMA
62 Comments Discuss this post in our forums...
Can You Beat the Impossible Gran Turismo Quiz?

Gran Turismo Sport 86 Jan 23 by Andrew Evans
It’s time to mark your calendars and start your virtual engines, the GT Sport World Tour is back! While we may have had a sneak preview of where and when…

Gran Turismo Sport 748 Jan 20 by Andrew Evans
Keeping it on the island will be the key to this week’s three GT Sport Daily Races. The new set of events all pose a similar challenge, whereby a loss…

Gran Turismo Sport 748 Jan 13 by Andrew Evans
There’s a certain sibilance surrounding the circuits in this week’s set of Sport Mode sprints. The new selection of three races features some friends from right back when GT Sport…

Gran Turismo Sport 86 Jan 10 by Andrew Evans
Details have just slipped out regarding the first Gran Turismo World Tour of the 2020 FIA-Certified Online Championships. For the first time ever, the World Tour will visit Australia, with…

Gran Turismo Sport 205 Jan 9 by Andrew Evans
The latest game update for GT Sport has arrived right on schedule. It’s a relatively compact file this time round, coming in at just 156MB, which is somewhat of a…