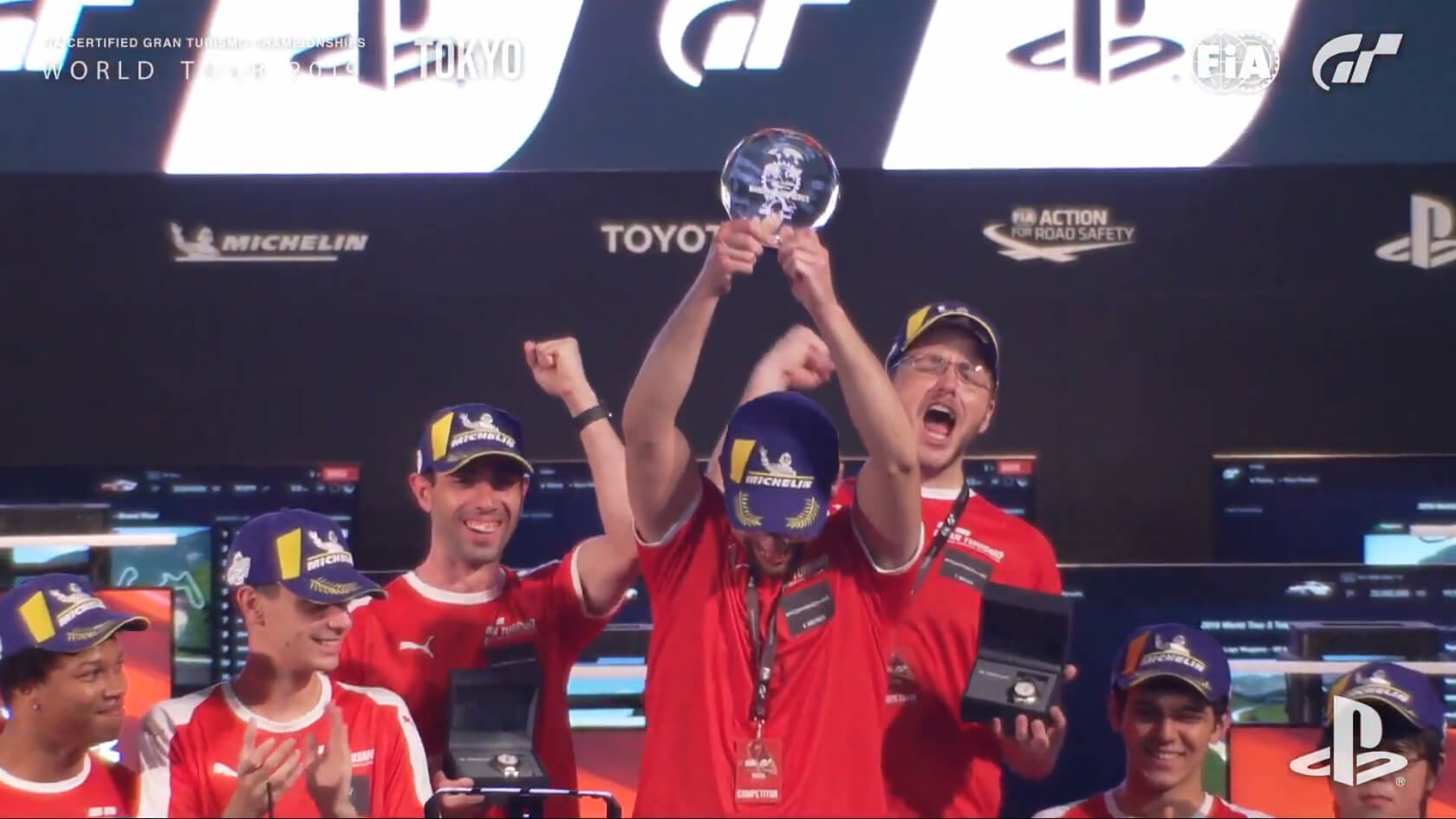 The German brand has become the fifth different manufacturer to win a Manufacturer Series event in six races. It follows Lexus, Aston Martin, Toyota, and Mercedes-Benz in claiming the crystal trophy at a World Tour event.

In the end it came down to how the team’s three drivers — Tristan Bayless (USA), Angel Inostroza (Chile), and Matt Simmons (Australia) — adapted to a new rule for this event regarding tire stints, coupled with some heroics from Inostroza in the all-important double-points race. 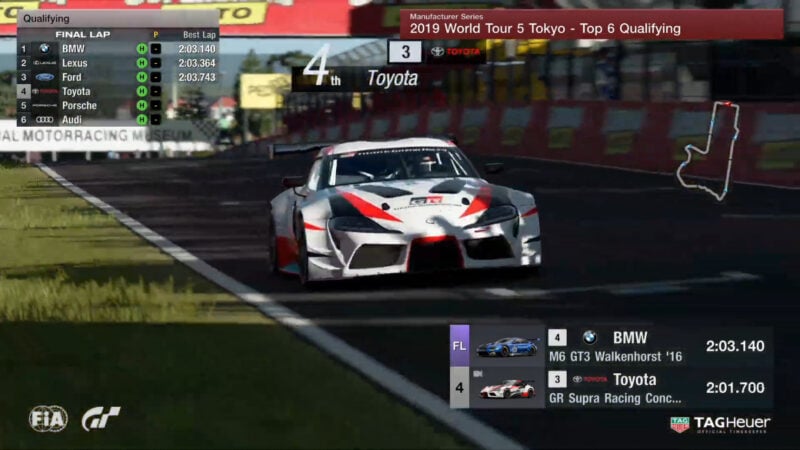 Friday’s qualifying at Autodromo Lago Maggiore threw up some surprises. Although several of the favorites got to the sharp end of the order — Toyota, Porsche, Lexus, and BMW — defending champion Mercedes-Benz didn’t make it through to the top six. Top of the pile was, as with the Salzburg event, Audi, while Ford crept into the top six.

That lead to the superpole shoot-out on Saturday, with the top six cars gunning for pole position but this time at the Mount Panorama circuit they’d use in race one. First blood went to pole specialist Nicolas Rubilar in the BMW, but his lap was almost immediately eclipsed by 0.9s, by a hard-charging Igor Fraga in the Toyota.

With Fraga’s lap practically untouchable the scrap was for who’d start alongside him. That proved to be Porsche, with Australian Matt Simmons making his last lap count to leap into second. Ford and BMW followed, with only a 0.1s gap to the front row, while the Audi struggled with the mountain to start sixth next to Lexus. 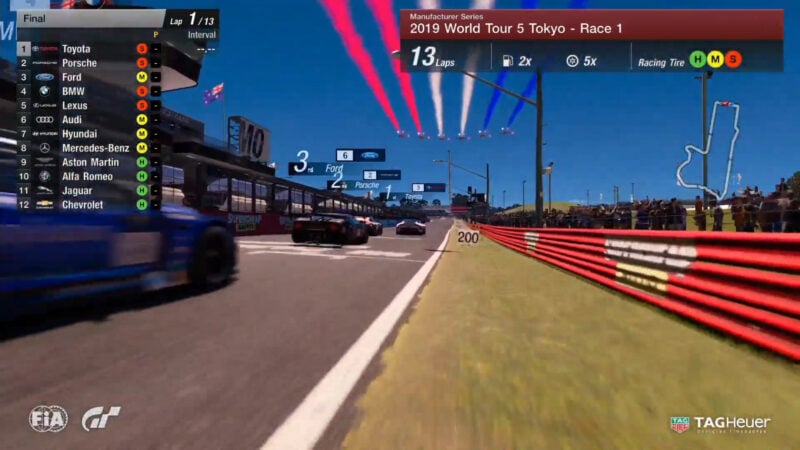 The teams had to adapt to a new rule regarding stint length for the Tokyo event. Rather than simply mandating that the cars must use each tire once, Polyphony Digital added a minimum number of laps for any stint. Now, rather than sacrificing the least-quick driver for a burst on the hard tires, every driver was required to drive at least four consecutive laps.

After all its good work in qualifying, Ford’s Armen Aghakhan quickly found out why turn one is called Hell’s Corner. Baptiste Beauvois in the Lexus made the error under braking, tagging BMW’s Nicolas Rubilar who then cannoned into the Ford GT sending it off into the gravel. That instantly sent Ford to the back of the grid, to say nothing of how the team’s race strategy would now play out.

Moving the other way was Audi’s Tatsuhiko Kato. While he hadn’t enjoyed the superpole, he’d guided the R8 up into third. Pro drivers Simmons and Fraga though were scampering away at the front — despite trading places — on the soft-shod Porsche and Toyota.

A huge accident at The Chase just before the first pit stop window shook up the mid-pack. Ayumu Takida seemed to miss his braking point, and collected the Lexus. As Beauvois span across the track, he collected Kevan Pounder in the Hyundai Genesis and the Jaguar F-Type of Vinicius Neto.

The two lead teams switched their strategies at the lap five pit stop. Toyota, and Rayan Derrouiche, switched to the medium tires while Bayless opted for the hard tires on the Porsche.

A relatively quiet middle period of the race ensued. Almost every car was on hard or medium tires, with only Audi’s Martin Grady on the softs. That got him past the Mercedes of Antony Felix after an error at the Dipper. Elsewhere, Alfa Romeo was providing the entertainment, with an optimistic pass on Adam Tapai’s Ford GT at the Chase, and a last corner tangle with both Jaguar and Aston Martin.

Porsche had left itself too much to do in the final four laps, and despite the tire advantage Angel Inostroza couldn’t make in-roads on Tomoaki Yamanaka’s Toyota. Tom Lartilleux in the Mercedes-Benz, on the soft tires, was well on the move however. The Frenchman managed to erase the memories of qualifying and get the car up into third — first re-passing the Audi and then breezing past Randall Haywood in the BMW M6. 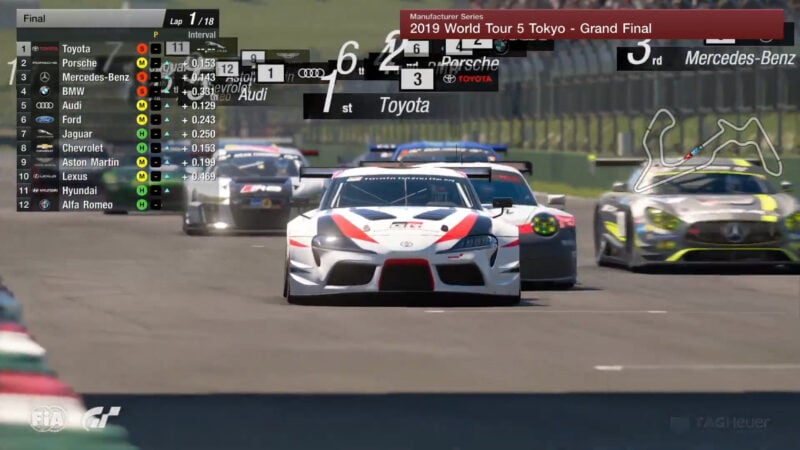 That gave Toyota the pole position for the double-points race two, and Fraga once again set about disappearing from the head of the field. This time Simmons in the Porsche couldn’t follow, as he opted for the medium tires compared to the Toyota’s softs. Simmons quickly became the cork in a German bottle, with BMW and Mercedes behind also on soft tires.

It didn’t take long to pop that cork though, as both Rubilar in the M6 and Lartilleux starting the Mercedes passed at opposite ends of the home straight. That grouped the cars by tires, with the three soft cars at the front, four hard cars at the rear, and all the mediums in-between.

With the longer race, the minimum stint length was now five laps, and most of the field duly dived in on that fifth tour. The exceptions were the three soft-tire cars and Audi and Lexus on the medium compound. By lap eight, all the first round of pitstops were done, and the front three were not entirely in agreement. While Toyota and BMW went from soft to medium, Mercedes opted for a hard tire middle stint.

That left Felix in the Mercedes vulnerable to Coque Lopez in the BMW, and sure enough they soon changed places. The tussle allowed Derrouiche in the Toyota to escape just that little bit further up the road, at 3.3s. Felix soon fell into the clutches of both Adam Tapai’s Ford and Adriano Carrazza in the Lexus, both on soft tires.

Porsche meanwhile, running sixth after a session on the hard tires, pitted at the end of lap ten for soft tires. This both put them into the lead of cars on soft tires and two-stoppers, but also in clear air with a big gap to Mercedes up the road. Inostroza quickly set about closing that gap and when Mercedes pitted for the medium tires on lap 12, the Porsche was right there. Even with Cody Latkovski at the wheel, Mercedes surely wouldn’t be able to resist for long.

By that time, the top four had pitted, and that resulted in one of the race’s great talking points. Catching Lexus through the bowl hairpin, Latkovski went right, Inostroza went left, and Andrew Brooks in the Lexus ended up fired straight through the bridge S-bend and into the wall.

With the Porsche unleashed, Inostroza soon caught the hard-tire train at the front. With four laps to go, the 911 RSR was just seven seconds and three places from the lead. That soon became two places as Inostroza passed Aghakhan in the Ford GT.

At the front, Haywood was focused on taking the lead from Yamanaka in the Supra. That gap had closed to just 1.7s, but suddenly he had to be aware of the attack from behind. With a two tire grade disadvantage, there wasn’t much he could do as Inostroza swept past into the final complex. Yamanaka was next up, and he couldn’t resist the Chilean either, with the 911 hitting the front before the end of the first sector. Haywood was able to put the BMW in the same space and follow the Porsche through. Toyota, having lead every lap of both races, lost two places in five seconds, a minute from the end.

Suddenly this scrap became four cars deep. Inostroza had put a second on everyone else running into the final sector, but Latkovski and Grady — using the soft tires on the R8 — had joined Haywood and Yamanaka. Covered by a second, these four cars were hunting two podium spots.

With two corners to go, four cars simply didn’t fit. The Mercedes and Toyota scraped doors, allowing Grady to slip the Audi between them. Yamanaka had slightly better drive off the last turn to take third ahead of Grady, while Haywood took second behind the impressive Inostroza. However the stewards determined Yamanaka to be at fault for the collision with Latkovski and issued a post-race penalty to drop the team to fifth.

"At the beginning of my stint, I didn't think we could win," said @loyrot. Angel's incredible drive in the closing lap helped put Porsche on top of the podium for @thegranturismo #FIAGTC World Tour Manufacturer Series here in Tokyo this weekend. 👏🏆 pic.twitter.com/WruRrNOAuC

Andrew Evans · Oct 26, 2019· Comments
Michelin, official Tire Supplier and Technical Partner of Gran Turismo, is staging a special online competition for players in south-east Asia and Oceania, with an all-expenses paid experience at Yas Marina, Abu Dhabi, for the winner.

Andrew Evans · Oct 26, 2019· Comments
A new set of Gran Turismo Sport Daily Races is now available, with the unannounced change to a four-weekly cycle now seemingly the standard from this point forward.

Andrew Evans · Oct 26, 2019· Comments
Following on four weeks from the last set, a new set of Daily Races is now available in Gran Turismo Sport as players get used to the new scheduling for the 2017 title.

Andrew Evans · Oct 26, 2019· Comments
For the first time in nearly a month, there’s a new set of Daily Races in Gran Turismo Sport for players to enjoy for the foreseeable future.

Andrew Evans · Oct 26, 2019· Comments
It’s the inevitable fate of any game that, once it is succeeded, it will eventually wither away as support is withdrawn. While this process usually takes months at a minimum, GT Sport seems as if it could be sidelined in record time.

Andrew Evans · Oct 26, 2019· Comments
Despite being superseded by Gran Turismo 7, GT Sport’s Daily Races seem to be continuing on their weekly cycle — for the time being at least.

Andrew Evans · Oct 26, 2019· Comments
Although Gran Turismo 7 is now out, GT Sport shows no signs of slowing down any time soon, with a new set of Daily Races now available to players.

Andrew Evans · Oct 26, 2019· Comments
Gran Turismo Sport will finally be superceded by Gran Turismo 7 this week, but there’s still plenty to be getting on with in the current title — starting with a new set of Daily Races.