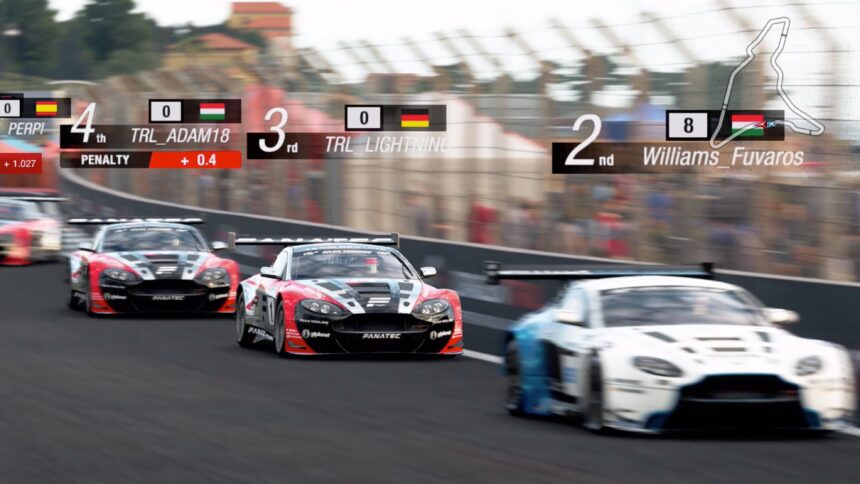 The third and final round of the Round Robin stage of GTPlanet League has seen one team come away undefeated and one yet to register a win.

In case you’re unfamiliar with the GTPlanet League, it’s GTPlanet’s new team-based esports competition using GT Sport. For the inaugural season, we’ve invited four of the biggest teams active in GT Sport to send four-driver squads into head-to-head races. In the first stage, the teams race each other once to determine their seeding for the knockout rounds.

All drivers use the same cars and tires, and there’s no tire wear or fuel consumption. Each position is worth one point, creating relevant battles throughout the field, along with one point each race for the fastest lap and one for the team that qualifies on pole position each match.

Going into last night’s action there were two squads hunting their first victory, and two who’d tasted champagne twice. Something had to give on both fronts as the teams faced off for the final matches in this phase.

These teams were both waiting to record their first win, despite some good results. Thrustmaster lost its opener to Williams by a single point, then fell to Team Redline by three — corresponding to Redline’s pole position and two fastest laps. Lazarus also lost out to Williams by just that one point, but had a slightly more emphatic defeat at the hands of Redline.

That set up Thrustmaster as favorite, particularly with Nico Rubilar leading the charge having won four of his five races, but it proved not to be the case. Lazarus, and last-minute stand-in driver Florent Pagandet, took pole position for the race at Mount Panorama in the BMW Z4 GT3. With Callum Moxon acting as rear-gunner, the Lazarus team controlled the first race admirably, book-ending the Thrustmaster team.

The reverse grid second race allowed Martin Grady and Vincent Rigaud to return the favor, with the two Lazarus drivers keeping a squabbling pack of Thrustmaster drivers at bay for the five-lap race. However, the race hinged on a moment at the top of the hill, with Adriano Carrazza seeming to collect Pagandet under braking at Forrest’s Elbow. That, and the penalties from it, shook up the order and allowed Moxon and Pagandet to finish ahead of the Brazilian Thrustmaster driver, giving Lazarus its first win by three. 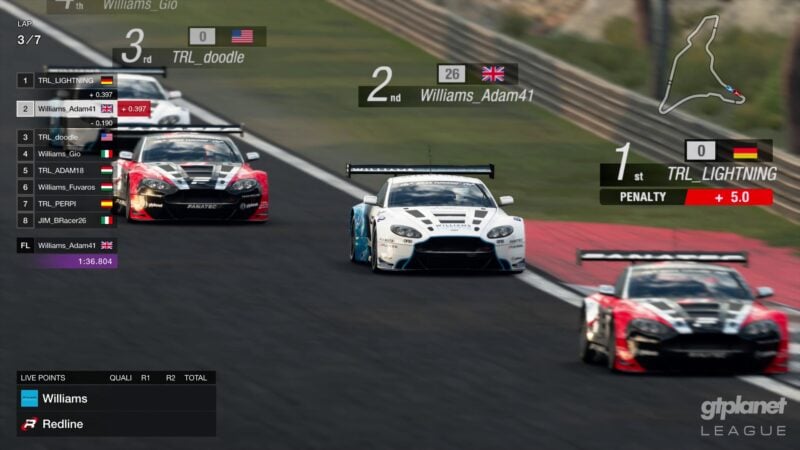 To decide who’d be top seed for the knockout phase, the two undefeated squads headed to arguably GT Sport‘s most iconic original circuit: Dragon Trail Seaside. While Redline’s wins had been more emphatic, Williams took first blood with the pole position and indeed the whole front row of the grid, with newcomer Valerio Gallo backed up by teammate Adam Suswillo.

Although briefly holding a 1-2-3 in the first race, Suswillo’s mistake at the “Chicane of Death” on lap three put him to the back of the field. Despite this, Williams held on, with Gallo winning ahead of colleague Patrik Blazsan, to take a huge six point advantage into the second race. Even better, the British driver was on pole position.

Redline’s Mikail Hizal took the race lead on lap one, but the game judged he’d knocked Suswillo into the barriers and awarded a five-second penalty. However, Suswillo made the same error at the same place, again on lap three, to drop him back out of contention.

With Andrew McCabe now defending his Redline teammate from the Williams of Giorgio Mangano, Hizal was able to take the checkered flag before his penalty promoted the American to the top step. With a seven-point swing, Redline also took the match and the top ranking for the next stage.

The four teams will head into the knockout stage, with the top seed racing the bottom seed and second against third. That will be:

The races will take place on Sunday, October 13, starting at 1800UTC (convert to your local time here). We will again be streaming live on GTPlanet’s YouTube channel, so don’t forget to tune in!

Gran Turismo Sport 1552 Feb 17 by Andrew Evans
GT Sport‘s first World Tour event of the year is still fresh in our minds, but already it’s time to prepare for the next stage. The Pre-Season for 2020 FIA…

Gran Turismo 7 95 Feb 17 by Andrew Evans
Kazunori Yamauchi has made some interesting comments about the future direction of Gran Turismo’s graphics. The Polyphony Digital studio boss has suggested that frame rate, rather than display resolution, may…

Gran Turismo Sport 535 Feb 17 by Andrew Evans
This week’s GT Sport Daily Races will take you to some tight and twisty real world circuits, in the UK and Japan. The UK’s representative is Brands Hatch for Race…

Gran Turismo Sport 201 Feb 15 by Andrew Evans
Polyphony Digital has revealed another new car on its way to GT Sport soon, and it’s a vehicle with quite some history. Aston Martin’s DBR9, a GT1-class race car that…