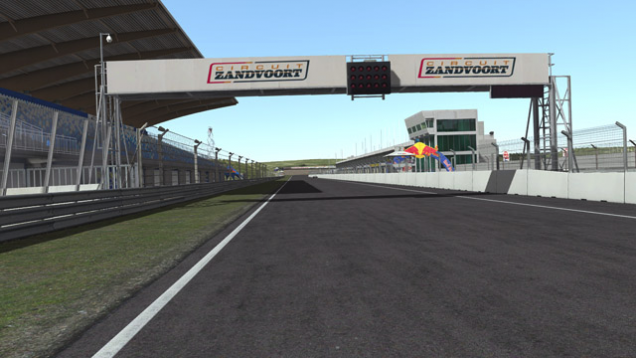 Image Space Incorporated has introduced the latest track to rFactor 2’s lineup. Circuit Park Zandvoort is currently available as a beta for the venerable sim.

The most famous Dutch race track of them all arrives just in time to play host to the second round of McLaren’s World’s Fastest Gamer competition. Known for its fast, undulating layout, Zandvoort should present a serious challenge to 650S GT3 pilots.

The circuit opened way back in 1948. Like Hockenheim and Spa, its original layout had a strong focus on high speeds. After over 30 years playing host to the Dutch Grand Prix, Zandvoort was closed down in 1989. This was largely due to noise concerns for the locals near the southern part of the track.

Fast forward to 1995 and Circuit Park Zandvoort was reborn. Despite taking up far less real estate than before, the current layout is actually very slightly longer at 2.67 miles.

Nowadays the track regularly hosts the DTM seires, the annual Masters of Formula 3 events, and many others.

Players accustomed to modern titles may remember seeing the track in iRacing and Assetto Corsa. However, the track made its appearance in the gaming world much earlier, courtesy of Codemasters’ Toca Race Driver series.

Looking to get in a lap or two? Circuit Park Zandvoort is currently available on Steam as a free download. Weighing around 280 MB, the track is currently in its beta phase (v0.2), but further revisions are already in the works.