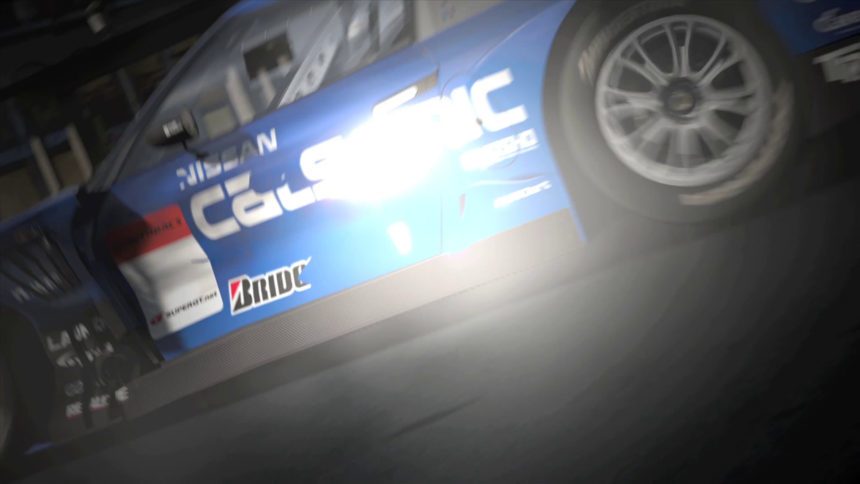 A tip from reader Volcao referenced a few screen grabs from one of the brief Gran Turismo 5 trailers released last month after E3 2010. His tip prompted me to take a closer look at the video myself and – sure enough – there’s actually a bit of damage shown here (albeit very, very briefly). Around 45 seconds into the clip, you’ll see a blue JGTC R35 Calsonic Skyline flipped over on its top and then sliding away from the camera.

It’s a dramatic accident for a GT game, and I think Polyphony Digital wants us to focus on the fact that cars can now be turned upside-down. Watching frame-by-frame, though, you’ll notice the car’s hood has suffered from the impact as it crumples in, exposing the top of the tire underneath. Immediately afterwards, we see the side of the car showing dents, damage to aerodynamic components behind the front wheel, and what appears to be missing chunks of the sponsor’s vinyl stickers.

Take a look for yourself in the three screen grabs I’ve provided below. These were snapped from the original version of the video, which you can download here in .mov format (88 MB) or just watch the embedded YouTube clip above.

Damage
The original comments for this post are no longer available.
Test Your Badge Knowledge With Our Car Logo Quiz

Gran Turismo Sport 832 May 3 by Andrew Evans
There’s a new set of GT Sport Daily Races starting today, with three new events for players to get to grips with over the next seven days. Each of this…