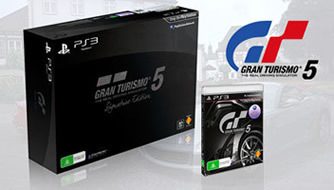 On October 6th, Sony launched a giveaway competition for a free Gran Turismo 5: Signature Edition package. Since that time, the competition was set to end on the old Australian release date, November 4th. That end date has remained unchanged (confirmed by Google’s cache) – until now. The legal terms and conditions have just been quitely updated to list a new ending date of December 9th.

I will be first to remind you this is not an official announcement or confirmation of a new release date for Gran Turismo 5. However, it is the first specific new date related to the game which has been found on any Sony website, and December 9th is a Thursday. Australia’s old date, November 4th, is also a Thursday – the day of the week typically reserved for big video game releases Down Under.

Assuming Sony plans to keep the same sequential worldwide release schedule for GT5, we could estimate a December 8th release in Europe/Japan and a December 7th release in North America. Obviously, these dates are also a Wednesday and Tuesday – the same as the original November dates. Furthermore, these dates fall at the tail end of Sony’s internal release date window, provided to me by a trusted source shortly after the delay was announced.

As you may recall, Sony was quick to reassure us the game would arrive “this holiday season” and announced they “expect” to confirm a new date before the end of October. Time is running out, as there are only two weekdays left in October as of writing – let’s hope the updated terms of this contest are an early indication the veil is about to be lifted.

Thanks to GTPlanet’s sharp-eyed reader GTR12 for picking this up!