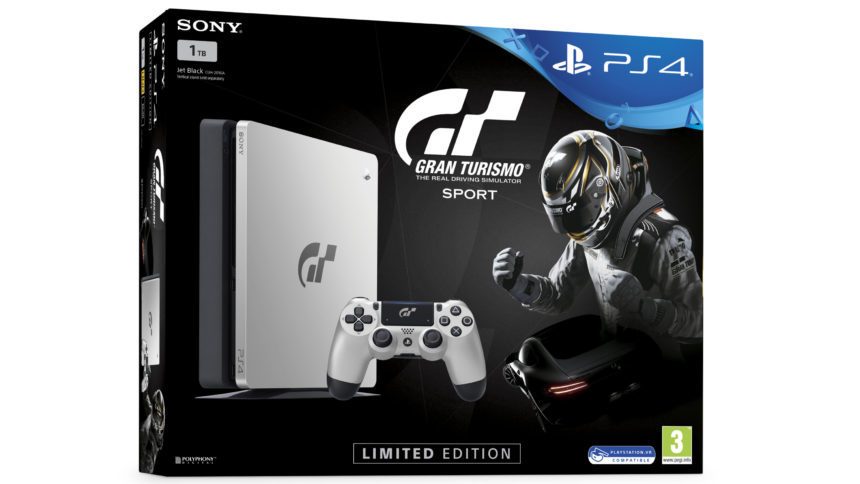 Just as we suspected yesterday, from the subtle hints, Sony has revealed a limited edition PS4 console in conjunction with GT Sport.

The new console features a special silver faceplate bearing the GT logo on a black console chassis. A special controller echoes this color scheme, with a black underside and silver top. This too has a GT logo, prominently on the touchpad.

Surprisingly, the console is based on the standard, slim 1TB PS4, rather than the PS4 Pro that many may have expected.

The bundle will also feature the “Day 1” edition of the game, giving a boost of 250,000 in-game credits. There’s also additional livery sticker packs and a chrome racing helmet. You’ll also get 60 PS4 avatars, to show off on your SEN profile.

If you’ve recently bought a PS4, or want to experience GT Sport on a PS4 Pro, you needn’t miss out as the custom DualShock 4 controller will be available separately. Other standard bundles are available too. These feature plain black 500GB and 1TB PS4s or the PS4 Pro, with a standard copy of GT Sport included.

However, fans in Asia or the Americas need not apply just yet. This limited edition is only for the UK, Europe and Australia, at least for now.

Sony will release the special console on October 18, coinciding with the game’s own release in those territories.

Gran Turismo Sport 664 Nov 30 by Andrew Evans
You’ll be heading to three of the world’s best-known race tracks in this week’s new set of GT Sport Daily Races, as two one-make races headline the offerings for the…

Gran Turismo Sport 2201 Nov 24 by Andrew Evans
While the finalists from the official 2020 FIA Online Championship season are fighting for their World Finals places right now, there’s still plenty of racing for the rest of us.…