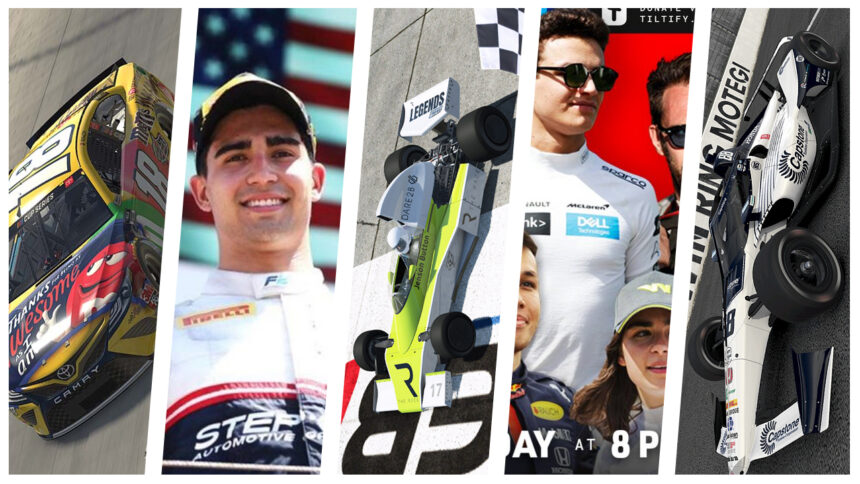 The professional racing drivers of the world are still sitting idle as tracks remain closed and large gatherings are banned. That means they have plenty of time on their hands to get involved in the new breed of esports events which fill the gap until society returns to normal (and hopefully beyond).

With Easter Sunday falling last weekend, a number of events took the chance to have a break, but there’s a full program in store for us this weekend. Here’s our guide to what’s going on and how to watch it.

Now in its sixth week, The Race’s All-Star Esports Battle returns for another race this Saturday. There’s the usual line up of big names from the esports world, with drivers like Bono Huis and Rudy van Buren, joined by a handful of pro drivers. The event is now a championship, with ESPN broadcasting it, and prizes for both the top esports driver and the top pro.

Running alongside it is the Legends Trophy, which unites an impressive list of pros and former pros to drive cars from F1 history. There’s three F1 world champions — Emerson Fittipaldi, Jacques Villeneuve, and Jenson Button — along with a host of legends like Juan Pablo Montoya and Rubens Barrichello. Two new names on the grid this week are WRC champion Petter Solberg and BTCC champion Jason Plato, whose robust driving style might lead to some incidents!

It all gets underway at 1600 UTC on Saturday, and you can watch below:

IndyCar’s iRacing schedule also continue uninterrupted, and visits a second oval in successive weeks this Saturday. It is, however, a very unusual venue for IndyCar, as the virtual series heads where the real one can’t: Japan. The 33-car field will take to Twin Ring Motegi’s oval course for a 113-lap race, starting at 1845 UTC.

The field has been a strong one throughout the races so far, but this weekend it gains two-time NASCAR Cup Series champion Kyle Busch, and adds four more Indy 500 titles with Helio Castroneves and Takuma Sato. As with last week, the event’s broadcast on NBCSN means that it’s not clear if a live stream will be available — though several drivers will broadcast their own Twitch stream.

Veloce Not the… GP Versus

Veloce Esport’s event returns this weekend, with a Versus format race on Saturday evening. This pits drivers against each other in a series of one-on-one races, eliminating the loser each time. Lando Norris won the first event ahead of YouTuber Ben “Tiametmarduk” Daly, and both return this week.

This week, the race is also raising money for UNICEF. You can catch the action below from 1900 UTC.

The NASCAR series was on a pause last week, but that didn’t stop it plunging into controversy for a second successive weekend. It returns to official action this weekend, at Richmond Raceway, and hopefully the stories will remain about the racing.

A “Saturday Night Thunder” event returns, for drivers not competing in Sunday’s main event, using the Xfinity Series cars at the same venue. This gets underway at 0000 UTC on Sunday April 19, with Sunday’s main event — the Toyota Owners 150 — in the Cup cars coming at 1700 UTC. It’s not clear if Sunday’s race will be streamed, outside of the drivers’ own streams, but you can catch the Saturday Night Thunder race below:

F1 took a break over Easter too, but returns this Sunday with a virtual version of the postponed Chinese Grand Prix. Remarkably, two of the real F1 teams will field their full driver lineup, as Carlos Sainz has now joined in with the action. He’ll line up alongside real-life team-mate Lando Norris for McLaren, as Williams duo George Russell and Nicholas Latifi also return.

The race broadcast starts at 1700 UTC on Sunday, and you can watch it in full below when the stream becomes available. In the meantime you can catch up with the last event, from Albert Park, Melbourne.