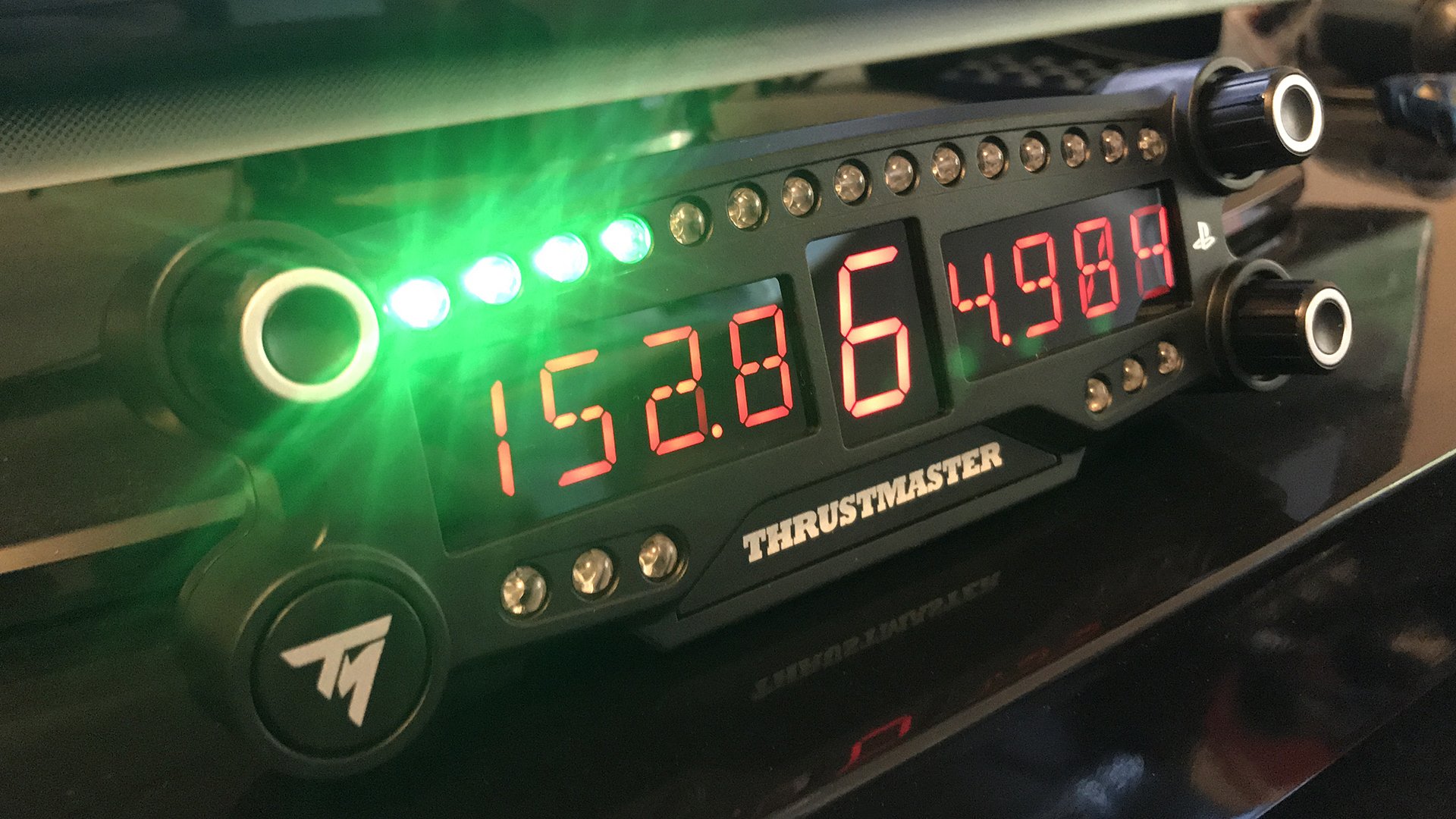 Does your car have a heads-up display?

Chances are it doesn’t. A handful of vehicles do — some modern BMWs, the Hyundai Veloster we tested earlier this year — but mostly, we all rely on the good ol’ instrument binnacle.

Yet a HUD is a standard feature of nearly every racing game. It can be turned off, sure, and the power of modern systems allows for more accurate in-car views than ever before. But if you want a screen clear of clutter, and a real-world instrument display feeding you all the essentials during a race, well, Thrustmaster has a new product for that very purpose. And it’s PS4-compatible.

Thrustmaster sent me the BT LED Display for review purposes. I used it exclusively with a PS4 Pro, and a variety of games. 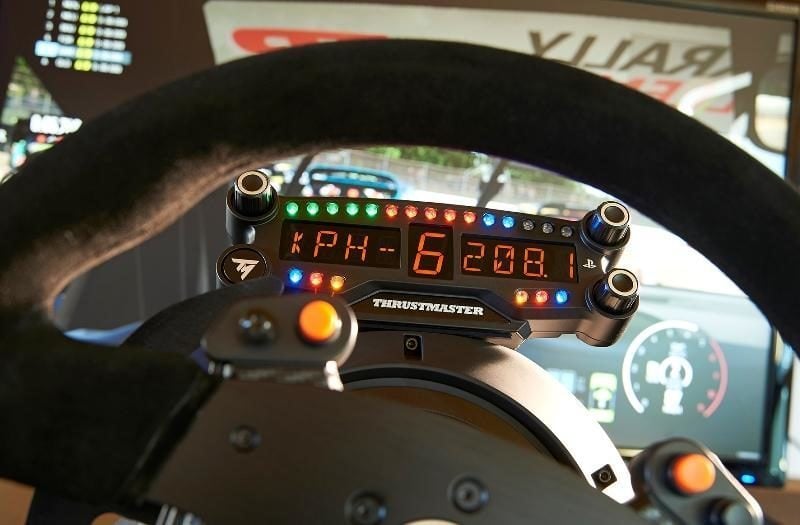 The BT comes in a tiny box barely bigger than the product itself. Pop it out, and you’re met with a lightweight bit of plastic, a very brief instruction pamphlet and… that’s about it. The BT doesn’t need anything else, though: the internal battery is rechargeable via a USB cord, the exact same one you use for your PS4 controllers.

It’s a very business-like item, the BT. The three rotary knobs have a satisfying click to them, making for deliberate selections. There’s not a lot of contact points here, but crucially for such a specialized product, the BT never feels cheap.

Lending to that feeling is the sheer brightness of the display. You will not miss those shift lights in your peripheral vision, even on their dimmest setting. The alphanumeric portion can get quite faint, but Thrustmaster’s decision to give players eight levels of brightness means you’re sure to find what works best for you.

If you’re looking to attach the BT to your rig, there are two M3 threaded holes on the back of the unit. In addition, it has two strips of softer plastic to sit it comfortably on a flat surface. For example, I put it on my entertainment console, directly below my TV. But the force feedback of a modern racing wheel will likely make that an impossible option on your rig itself, and you’ll want it within arm’s reach to cycle between on-screen info.

Considering the strong sim racing community on PC — and the increased rig customization that allows for — it’s strange Thrustmaster has made the BT PS4-exclusive.

That said, it does work flawlessly with the PlayStation 4. The BT takes about two minutes to set up, and from then on, will turn on and connect easily. The Bluetooth is reliable, and works up to 40 feet away from the system. If that isn’t enough for you, well, maybe consider changing your sim rig setup!

The BT may be PS4-exclusive, but Thrustmaster hasn’t tied it to the company’s own hardware ecosystem. Thanks to that Bluetooth connection, it will work with any sim racing rig you’ve got, and any combo of wheels/pedals/what-have-you. It even works with a controller!

Throughout my time with the BT, I never noticed a single bit of lag. It’s no different from using the in-game HUD in terms of display speed, meaning you can happily enjoy a clutter-free environment. 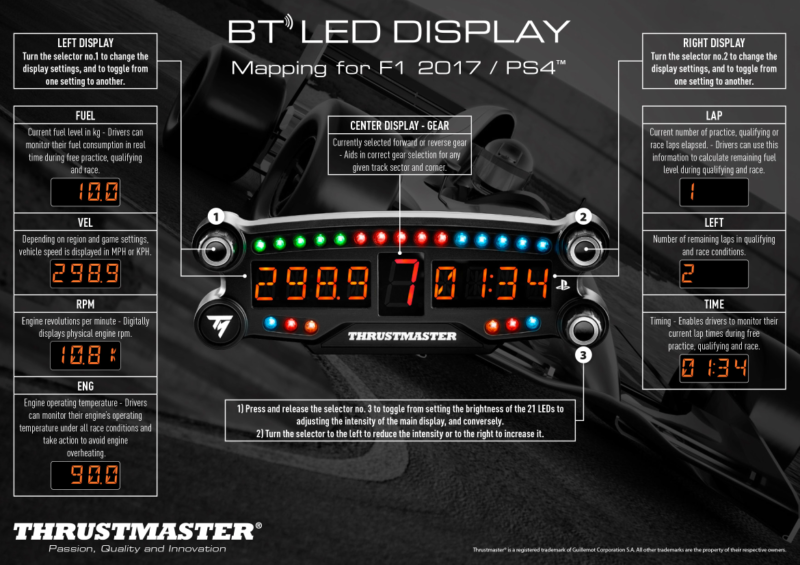 The BT’s feature set largely depends on the game you’re playing. If you’re a GT Sport player, we’ve got bad news for you: it won’t work.

However, Thrustmaster has put the power in developer hands.

The full list of compatible games is available here, and Thrustmaster will update it regularly. As of writing, it covers eight titles (stars indicate expanded features):

I took it for a test drive in F1 2017, PCARS2, and WRC 7. The latter two stick with the default display (speed/gear/time), but Codies’ open-wheeler title really unlocks the usefulness of the BT. Being able to select things like fuel load and engine temp are incredibly helpful. In the case of an F1 car, it also adds to the immersion. Taking a breather on the back straight at Silverstone to check my remaining fuel mid-race was oddly satisfying, in a way clicking a button on a controller just couldn’t match.

F1 2017 also makes use of the six marshalling lights at the bottom of the BT.

The battery life is impressive. With a full charge, the BT will last up to 48 hours of play time. And as mentioned before, it uses the same USB setup as a DS4, meaning you can — cord length permitting — charge it while playing. The tiniest of lights, located on the back of the unit, lets you know it’s charging.

The BT’s toughest selling point is the selling price itself. It’s not what you’d call an essential part of a sim racing setup.

It’s certainly nice to have as an option though, and offers a subtle (if welcome) bump in approachability. Having friends over to try out the rig, a universal LED display gives the experience another nudge towards realism, instead of trying to learn each game’s unique HUD.

I found myself turning it on even when I wasn’t game for the full rig experience. Armed only with a controller for a casual late-night F1 2017 session, it really does perk up the drive.

Is all the above worth the $170 asking price? For all but the most hardcore (PS4-only) sim racers, with the current game list, probably not. But the BT has space to grow as developers continue to find unique uses for it. 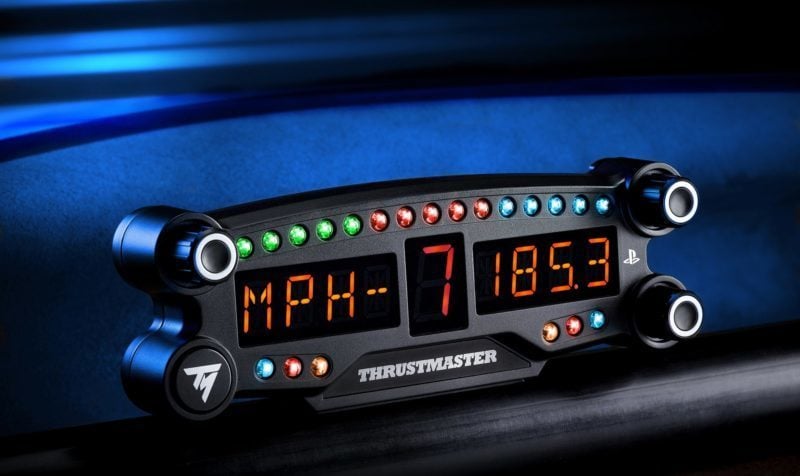 For years, PC players have had similar displays available at a variety of prices, but the console crowd has had to watch from afar. With the sheer quantity (and quality) of racing games on the market for Sony’s system, it’s great to see further specialization in terms of hardware.

Thrustmaster deserves credit for building the BT, and testing these waters on consoles. But now, we need developers to support it. It seems like Codemasters is a believer, with the BT already supporting F1 2018 over a month before launch. That’s encouraging, and hopefully others follow suit. There are so many possibilities: I can think of a half-dozen uses for GT Sport alone. Make it happen, Polyphony!

If the price doesn’t scare you away, you’ll find the little BT a welcome addition to your sim rig.

It's not cheap, but the BT brings multi-function displays to consoles.

Thrustmaster is a trusted name in the sim racing world, and the BT offers no reason to doubt why.
Compatibility

PS4-only, but will work with any input devices you can name.
Features

Andrew Evans · Jul 21, 2018· Comments
Fanatec’s direct drive Gran Turismo DD Pro is available for customers in Europe and the USA to order again, with first deliveries expected in or before February 2023.

Michael Leary · Jul 21, 2018· Comments
In news that is sure to make the holidays a bit more festive, Sony Interactive Entertainment president Jim Ryan has announced that the console shortage woes that have plagued the PS5 since launch are now resolved.

Andrew Evans · Jul 21, 2018· Comments
Serious sim racing can be an expensive business. Sim racing kit will set you back hundreds of dollars — or more — and that’s without considering a sturdy place to mount it.

Andrew Evans · Jul 21, 2018· Comments
After more than a year of waiting, Thrustmaster has finally revealed its new Direct Drive wheel: the T818.

Andrew Evans · Jul 21, 2018· Comments
If you’ve been waiting to get your hands on the official wheel of Gran Turismo 7, the Fanatec Gran Turismo DD Pro, now might be your chance as Fanatec is once again carrying stock — but you’ll need to be quick.

Jordan Greer · Jul 21, 2018· Comments
Logitech has just revealed the G PRO Racing Wheel, and it’s a product I never thought it would actually make. The company has a long history of producing reliable, entry-level sim-racing hardware, but it has always ceded the higher-end of the market to companies like Thrustmaster and Fanatec. With this new direct-drive wheel, all of that changes in a pretty big way.

Andrew Evans · Jul 21, 2018· Comments
In a surprise shot across the bows of high-end driving wheel manufacturers, Logitech has announced its new direct-drive G PRO wheel — and it will be available from today, for both Xbox and PlayStation.