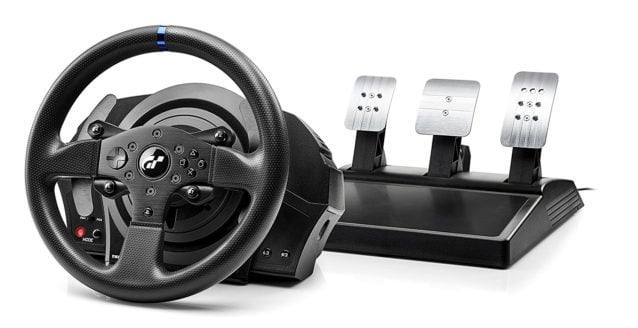 Thrustmaster’s latest wheel has had a quiet debut on none other than e-commerce giant Amazon.com. While not an entirely new product, the T300 GT Edition nonetheless features a few unique changes to the regular T300 RS formula (read our review of that wheel right here).

Utilizing the same powerful brushless motor, the servo base features full PS3 and PS4 compatibility and 1080-degree rotation. The bundle comes with an 11-inch rim that looks essentially identical to the vanilla T300 RS, swapping out the PlayStation logo for the expected GT emblem.

The big difference is the final part of the package. Boasting a third pedal, this isn’t Thrustmaster’s T3PA-PRO setup, but an exclusive new GT Edition Pedal Set. Judging by the wording, the base is plastic while the pedals themselves are metal. They’re adjustable too, at least in the case of the clutch and accelerator, allowing players to modestly tailor the spacing.

Of course, being based off the T300 package, the whole setup is compatible with most of the modern Thrustmaster ecosystem, including the afore-mentioned T3PA-Pro pedal set, TH8A shifter, and the various detachable rims the company currently offers.

You might be wondering why the relative lack of fanfare, when even Thrustmaster’s official website doesn’t (yet) list the new product. We’ll hazard a guess that GT Sport’s push into 2017 is the likely reason: the original date of mid-November means this wheel would have been revealed right in the ramp-up to release.

This may not even be the only product Thrustmaster has planned to tie in with Polyphony’s upcoming racer. We’ve still yet to hear more details on the mysterious direct-drive wheel first shown at the London Copper Box event earlier this year…

The T300 GT Edition represents a slight deal of sorts over the existing T300 RS, listing for the same regular price ($399.99) but including a clutch pedal. While it’s currently listed as “temporarily out of stock” if the bundle sounds like your cup of tea, you can order it off Amazon.com right here.

EDIT – As many have pointed out in the comments section, the pedals seem to be the T3PA set after all, with slightly different pads. Thanks to all that let us know!

Jordan Greer · Oct 21, 2016· Comments
At the recent Gran Turismo World Series Finals in Monaco, I had the chance to be one of the first humans to race against Gran Turismo Sophy, the radical new artificial intelligence system developed by Polyphony Digital and Sony AI.

Andrew Evans · Oct 21, 2016· Comments
The newest Gran Turismo 7 Daily Races are now available, giving players some fresh challenges to occupy them for the next seven days.

Andrew Evans · Oct 21, 2016· Comments
GTPlanet had the opportunity to sit down with Gran Turismo series creator Kazunori Yamauchi as part of a round-table interview during the recent GT World Series Finals in Monaco.

Andrew Evans · Oct 21, 2016· Comments
One of the bigger stories surrounding Gran Turismo in 2022 is production finally beginning on the long-awaited movie of the same name.

Andrew Evans · Oct 21, 2016· Comments
As the curtain drops on another exciting season of the Gran Turismo World Series, Polyphony Digital is already looking forward to a bigger and better 2023.