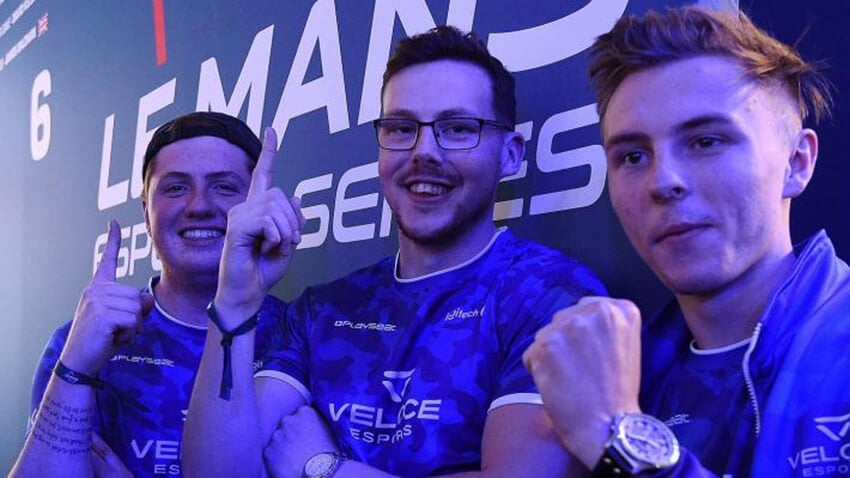 Following eight months of qualifiers, and more than 20,000 participants, the esports team came out on top in the final event — held at Circuit de la Sarthe during the 24 Hours of Le Mans weekend.

The unusual format saw the teams taking part in an initial eight races, starting at 1100 local time on Friday morning. The teams assembled a dream endurance racer garage in Forza Motorsport 7, with a €150,000,000 budget, to compete on circuits like Silverstone, Sebring, and old and new versions of Le Mans itself.

Although each race came with its own prize — part of the $100,000 prize pot for the event — it did not decide championship standings. Instead each determined, by way of a points system, a starting handicap for the ninth and final race. There it would be winner-takes-all.

Going into this final, the local French team of Baguette Racing was leading the pack. Veloce was 15 points — and so 15 seconds — back in fourth, tied with MAD Motosport. However, with two Forza specialists, David Kelly (left) and Noah Schmitz (center) on the team alongside eROC champion James Baldwin, the team would still be well fancied.

Driving modern GTE cars at the Circuit de la Sarthe, Baldwin soon overtook second-placed Kitty Krew (the team of Canadian Forza champ Evan Thorogood). Schmitz, at the wheel for the second stint, made the pass for the lead on lap 18, handing over to Kelly in the final pit stop. That left Veloce in clear air, to coast to a 13-second victory.

This gave Veloce the LMES 2019 title, and the $25,000 prize to go with it (in addition to $6,000 from earlier races). Even better, the trio got to stand on the top step of the real Le Mans podium to claim their crown.

Season 2 of the Le Mans Esports Series will soon get underway. If you fancy taking part, you can sign up on the official LMES website.