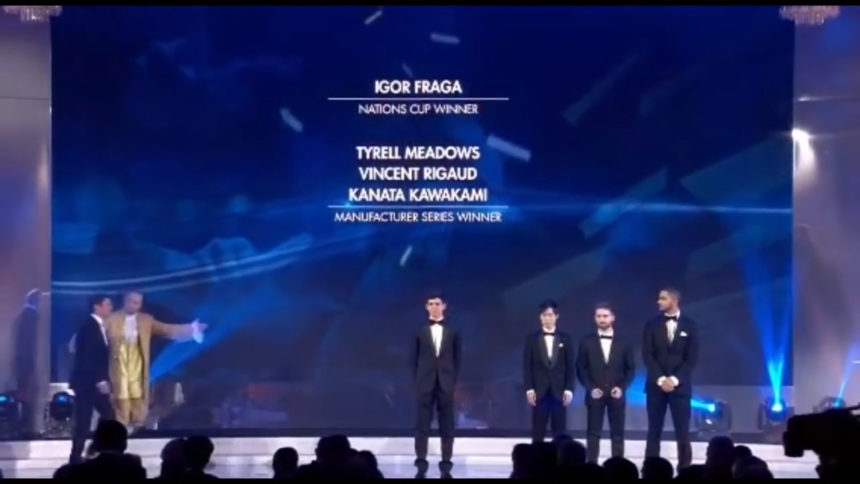 The annual FIA Prize Giving happened this past weekend in St. Petersburg, Russia. There, the very first GT Sport FIA-Certified champions received their trophies alongside the rest of motorsport’s elite.

Each year, the FIA gathers all the various racing disciplines together for a night of celebration. The tuxedos are everywhere, the bubbly is flowing, and all the winners of the season get their just recognition. For 2018, that included Igor Fraga, Tyrell Meadows, Vincent Rigaud, and Kanata Kawakami.

The four men emerged victorious last month in a heated three days of racing in Monaco for the FIA World Finals. Fraga showed off his utter domination in the Red Bull X2014 in the Nations Cup Final, while the three-man crew of Meadows, Rigaud, and Kawakami controlled the field in the Manufacturers Cup, representing Lexus.

Each driver left Monaco with their own trophies, in the shape of Umberto Boccioni’s “Unique Forms of Continuity in Space”. They now can add the FIA’s trophies to their respective cabinets.

In St. Petersburg, Fraga, Meadows, Rigaud, and Kawakami shared the stage with other winners from 2018, including Lewis Hamilton (F1) and Sébastien Ogier (WRC). It was the second time the sim racers did so with Hamilton in as many months, as Mercedes’ star driver was on-hand in Monaco to meet them all. He is “The Maestro” of GT Sport, after all.

Speaking of Monaco, native Charles Leclerc picked up his second Rookie of the Year prize. How’s that possible, you ask? He won in 2017 for his Formula 2 title win, and this year for a strong performance at Sauber — so strong, he’ll be moving to Ferrari to pair with Sebastien Vettel in 2019. It’s unclear if Vettel will still be rocking his Nigel Mansell ‘stache by then, though.

You can check out the GT-centric highlights down below, courtesy of Nations Cup champ Igor Fraga himself: