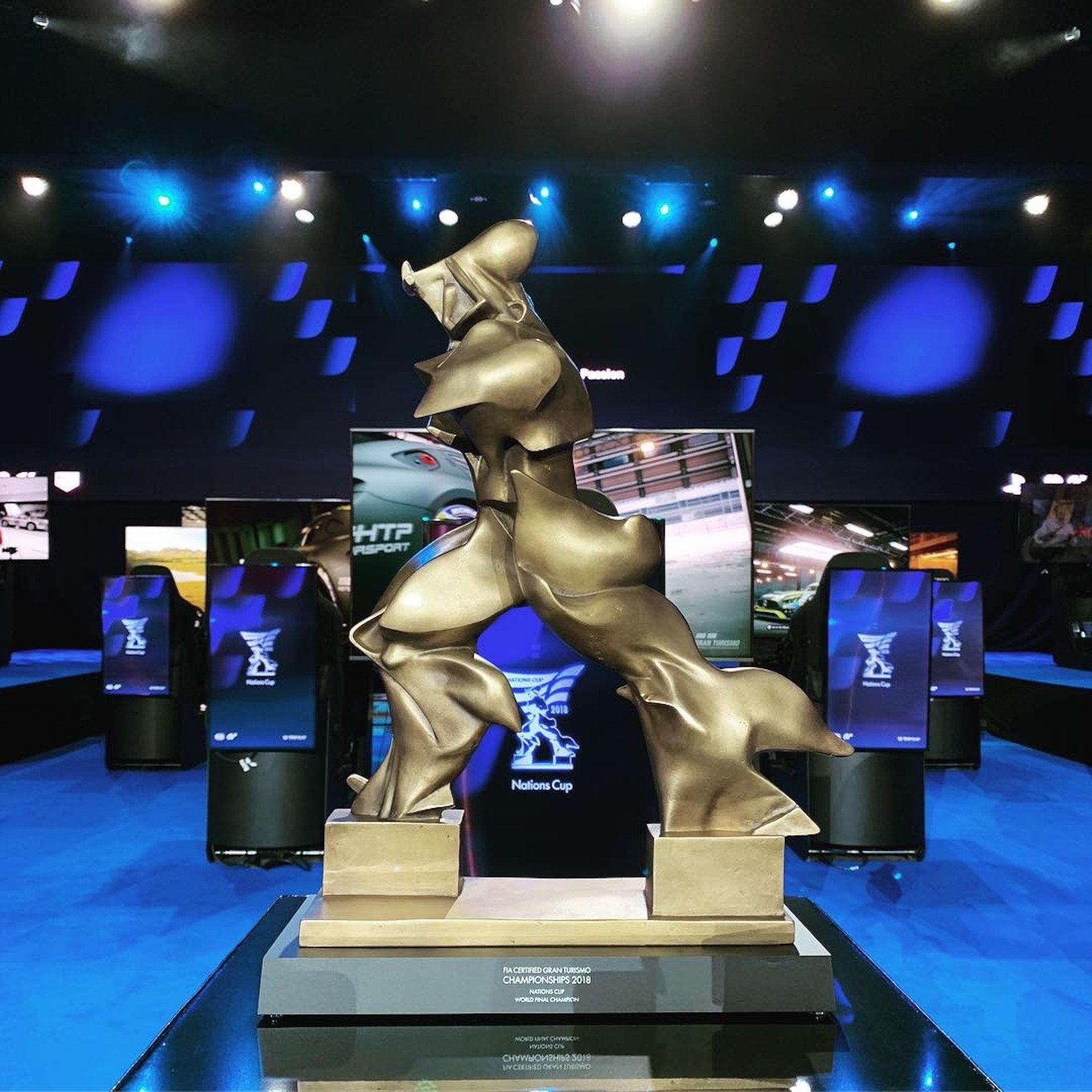 Gran Turismo’s takeover of Monaco is over and the dust has settled on the 2018 FIA-Certified Gran Turismo Online Championship. After three days of action, Polyphony Digital has crowned the Nations Cup and Manufacturer Series champions.

Each winner — Igor Fraga, Kanata Kawakami, Tyrell Meadows, and Vincent Rigaud — will head to St. Petersburg next month to receive their trophies at the FIA’s annual Prize Giving event. There, the FIA will officially dub them “world champion”, along with drivers from the top racing categories in the real world.

But while the racing drivers win cups and shields, the virtual drivers will hold something quite different aloft: a replica of Umberto Boccioni’s “Unique Forms of Continuity in Space” sculpture from 1913.

Ahead of the main event in Monaco, Kazunori Yamauchi took to the stage to tell the competitors the reasons behind choosing this piece of art as the game’s feature trophy.

The Love of Speed

As Yamauchi explains, Boccioni was part of the Italian “Futurist” movement. This involved a group of artists at the beginning of the 20th Century who sought to celebrate speed and machinery, rejecting art forms of the past.

The futurists presented their vision — the Futurist Manifesto — in 1909 in a letter to the French newspaper Le Figaro. Yamauchi notes that “not all of the ideas within are agreeable or proper today”, but there’s one phrase that catches the eye: “A racing car is more beautiful than the Nike of Samothrace”. This is a classical sculpture representing the goddess Nike, held as one of the most beautiful artworks ever created.

Futurism arose in a time when humans were discovering speed through machinery. In the years leading up to the manifesto, the Royal Automobile Club was founded and the Wright Brothers flew the first aeroplane. Prior to Boccioni’s sculpture, the Indianapolis Motor Speedway opened, and held its first Indy 500.

Yamauchi remarks: “What was going on in 1914 when this sculpture was first created was that humankind was discovering speed for the first time through machines. Until then, humankind didn’t know what real speed was.”

If you’re familiar with automotive design, chances are you’ve seen a speedform. This is essentially a model that represents the shape of a vehicle and the airflow around it, but without the details like windows and wheels. A speedform is a basic representation of the curves — or lack of them — for a given vehicle.

The most common version of the speedform is one you’ll see in GT Sport, and the livery editor’s paint chips. Car manufacturers and paint shops will use a very similar model when specifying a car’s paint or respray, as it helps visualize how the paint color looks on a 3D car model.

However, the original speedform wasn’t a car at all. It was, in fact, this very sculpture. “Unique Forms of Continuity in Space” was the genesis of the speedform and, as Yamauchi notes, “this is something that, quite often, people in the automotive industry and motorsports don’t know about”.

The trophy also has an unusual role in representing modern Japanese culture — or at least a portion of it — despite being a 100-year old piece of Italian artwork.

Boccioni’s sculpture is, rather surprisingly, the inspiration for the “Gundam” mecha. If you’re unfamiliar with them, a mecha is a large, robotic combat suit with a pilot inside. They first gained popularity in the “Mobile Suit Gundam” anime series in 1979, and are today a significant part of Japanese anime culture.

Yamauchi comments: “The origin of all the mecha designs in Japanese animations — that whole subculture — really originates from [this sculpture]. If you get into the detail it really looks alike.”

25 Comments
Click here to see the related discussion our forums...