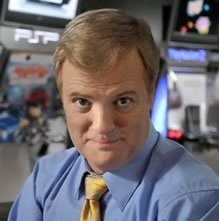 You’ve probably seen Sony’s recent marketing campaigns featuring “vice president” Kevin Butler (played by actor Jerry Lambert) talking about the company’s latest first-party titles. His most recent clip focuses on Sony’s latest kart racing game Mod Nation Racers, but at the end he mentions his “next project – let’s just say it’s a little racing game that rhymes with ‘man furismo jive'” with a knowing look – understandably raising quite a few eyebrows in our forums and around the web.

However, while he’s obviously referring to Gran Turismo 5, we really don’t know exactly what that means though it may suggest an earlier-than-expected marketing push if the game’s release window has been moved up from fall. Check out the full clip below and decide for yourself…