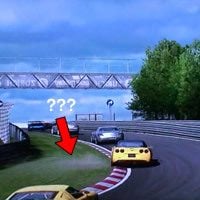 Here’s an interesting video from GT5’s latest appearance at Gamelab in Spain last weekend: watch the dust kicked up by the cars as they clip the inside of the curb around 1:20. As you can see, it appears to be quickly whisked away by a strong breeze. This is quite different from what we saw when GT5‘s new Nurburgring circuit was officially revealed back in May – watch the video below of the same car from the same camera angle, and you’ll see a puff of dust rise straight up into the air, undisturbed.

With that said, the wind effect appears to be somewhat over-exaggerated, and you’ll notice that nothing else in the environment is moving appropriately (most obviously, the trees). So, is this just an errant bug? Or is it, perhaps, a tiny sample of GT5‘s weather effects that accidentally slipped into this demo? I’m not convinced just yet, but it’s a curiosity that I hope we will be able to learn more about very soon.

Thanks to sharp-eyed reader “Ringmaster” for sending this in!

Gameplay VideosGT5 VideosNurburgring NordschleifeWeather
The original comments for this post are no longer available.
Test Your Badge Knowledge With Our Car Logo Quiz

Gran Turismo Sport 1015 Mar 1 by Andrew Evans
It’s the first of the month and the start of a new week, and there’s another set of new GT Sport Daily Races to keep us all occupied for the…

Gran Turismo 7 307 Feb 23 by Andrew Evans
Gran Turismo fans will have to wait a little longer to get their hands on the next full entry in the series, as Sony has revealed the game won’t make…

Gran Turismo Sport 1015 Feb 22 by Andrew Evans
A new set of GT Sport Daily Races has arrived, and the next seven days will put you in racing action at circuits — real and fictional — around Europe.…

Gran Turismo Sport 2380 Feb 18 by Andrew Evans
Updated February 20: Since we posted the details below, all corresponding information has been removed from the official Gran Turismo website. We’ll update this article with more information as we…

Gran Turismo Sport 1015 Feb 15 by Andrew Evans
The latest set of GT Sport Daily Races, running for the next seven days, will see you recreating the golden era of rally in a rather unusual event — as…