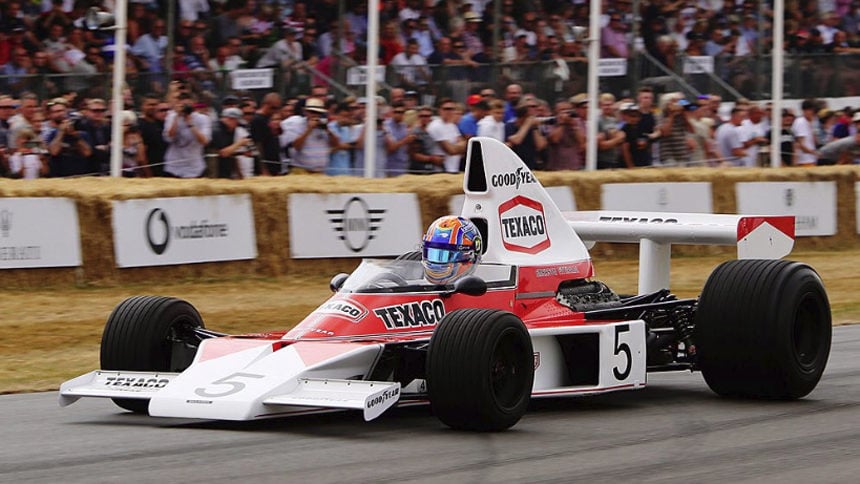 When Rudy van Buren won McLaren’s World’s Fastest Gamer competition at the end of last year, it was a dream come true. Now the Dutchman is finding out just what some of the perks of the job really are.

At this year’s Goodwood Festival of Speed, McLaren is making quite a showing. At center stage is its new 600LT that’s downright ludicrous. However, there are several other fantastic McLaren cars out and about as well.

One of those cars is the famous McLaren M23 Formula 1 car.

To show off his skills, McLaren tapped van Buren to take the wheel of M23 for this year’s event. It’s not just any M23 either, it’s the world championship car driven by none other than Emerson Fittipaldi back in 1974.

As you’d imagine the M23 is quite a bit different than the MCL33 van Buren currently works on. With its 3.0-liter Ford-Cosworth DFV, it puts down around 500 ponies. That’s just over half the roughly 950hp of the current F1 contender. But unlike the modern day racer, the M23 doesn’t have the bevy of electronics to keep everything in check.

After the run, van Buren was understandably a bit awestruck with his time in the M23. He had this to say in a video posted to Twitter:

“As you can imagine it’s one of the best things I’ve ever done. I’m a guy who talks quite easily, but today it’s got me speechless…I’ve literally just been staring at the floor basically trying to let everything sink in just what happened. The car’s amazing, atmosphere’s amazing, people’s amazing. Lifetime memories I would say.”

If you want to see some snippets of the run, you can check out the Tweets below from McLaren F1 and McLaren Shadow.

Now only if we could find a job with perks that involve driving classic F1 cars! Guess we will just need to settle driving James Hunt’s M23D in the upcoming F1 2018.

Time to give the loud pedal a try, Rudy. @fosgoodwood ?? pic.twitter.com/OUaRA8I67q

And they’re off. ? @RvBuren heads for the hill in the iconic M23. A special moment for our gamer turned sim driver. ? @McLarenShadow #McLarenFOS pic.twitter.com/HoCW1cZrdO