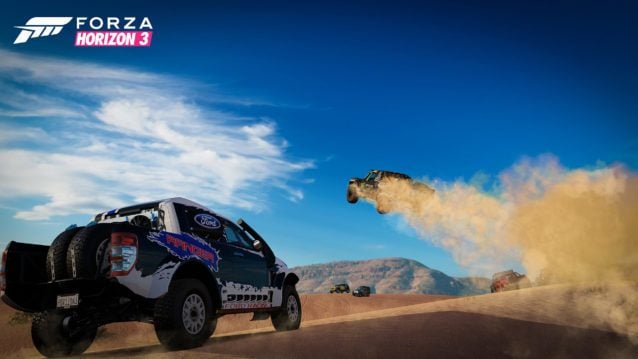 Turn 10’s Dan Greenawalt sat down with Matt Farah and the rest of The Smoking Tire podcast crew to chat about the newly-unveiled Forza Horizon 3. In it, he lets a few choice tidbits loose on the upcoming open-world game, chief among them being the (eventual) addition of 3-wheelers.

When talking about some of his personal desires for an open world game – a hovercraft does sound fun – Farah asks Greenawalt about the introduction of trikes, using the Morgan 3-Wheeler as an example. Greenawalt’s response is coy, that there might be a vehicle of that type “here and there”, before talking about how the physics team worked to get the game to support shorter wheelbases. He then name-checks Polaris (of Slingshot fame).

This continues the franchise’s effort to include more variety in its ranks. During the Xbox 360 era, the titles infamously did not include open-wheel cars, an oversight corrected with the move to the current generation.

Also, Dan’s quick to confirm what many suspected: driving too far out from the beach will in fact reset a car. There you have it: no boating in Horizon 3.

Much as they have with previous Forza titles, Turn 10 and Playground Games will use the summer to slowly unveil the entire 350+ car list.

The decidedly NSFW podcast – it’s very candid, so expect some F-bombs – can be found in its entirety here. The relevant part of the interview starts at 43:40. Thanks to Patrick for the tip!

Gary Slater · Jun 14, 2016· Comments
We suspected that it may be coming sooner or later, but now Turn 10 has officially confirmed the news: Forza Horizon 3 is reaching the end of the road.

Michael Leary · Jun 14, 2016· Comments
It appears Forza Horizon 3 still has some life left in it – at least, enough for what looks to be a final hurrah.

Michael Leary · Jun 14, 2016· Comments
Big savings have once again come to pass for the Forza series, courtesy of Deals With Gold. This week, Microsoft has combined Forza Motorsport 7 and Forza Horizon 3 into a neat bundle. If you’ve yet to make the jump, now is as good of a time as any.

Kyle Patrick · Jun 14, 2016· Comments
Amidst all the news about the upcoming Forza Horizon 4 this past month, an impressive stat on its predecessor flew under the radar. According to Ralph Fulton, FH3 has had over 9 million players since its September 2016 launch.

Brendan Rorrison · Jun 14, 2016· Comments
Xbox Live Gold members can pick up two discounts on substantial Forza DLC. With reductions for Motorsport 7 and Horizon 3, those looking to enhance their experience should have a look at what the sale has to offer.

Kyle Patrick · Jun 14, 2016· Comments
Playground Games is keeping the Forzathon events coming for its open-world Forza spin-off. Players will have regularly-scheduled challenges all the way into February 2018, according to a new set of Xbox achievements.

Gary Slater · Jun 14, 2016· Comments
The latest Forzathon challenges are now live for Forza Horizon 3 players. The focus for this weekend is all on hypercars. Going under the name “Speed Is Key”, the newest challenges will see players putting their foot down in the world’s fastest cars.

Gary Slater · Jun 14, 2016· Comments
This weekend marks one year since Forza Horizon 3 was first released. To celebrate the occasion, the latest Forzathon events offer players a new batch of car and manufacturer-specific challenges.