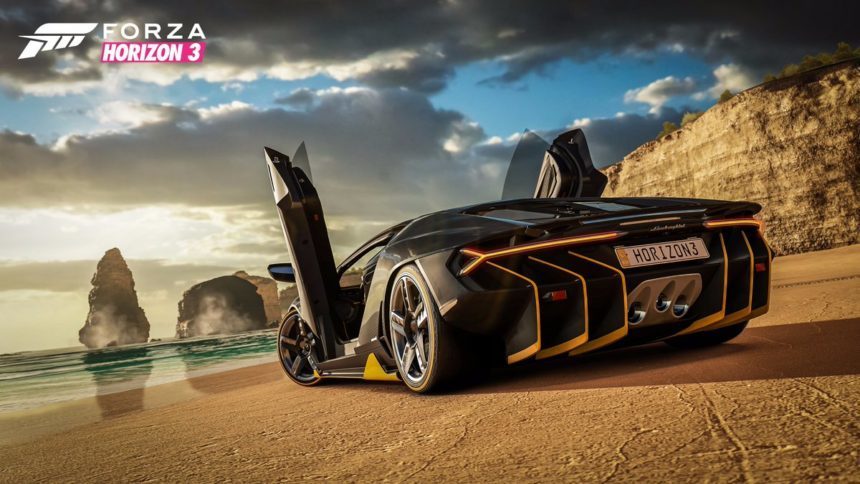 Months of speculation can now be put to rest: the next installment in the Forza franchise is indeed Horizon 3, and it will be available to players on both XB1 and PC this September 27 care of Microsoft’s Crossplay initiative.

Australia was heavily-rumoured to be the setting of the third title in Playground Games’ spin-off franchise, after Colorado and Southern Europe featured in the previous games. It brings with it the varied kind of terrain the Horizon series is known for, with huge expanses of flat tarmac for top speed testing, and craggy off-road paths for the high-suspension crowd. Turn 10 claims the map is twice the size of Forza Horizon 2’s.

Horizon 3 will feature the largest collection of cars yet seen in a Horizon title, arriving with over 350 cars in its garage. For the first time in the franchise, widebody kits have been included: a BMW M4 and Nissan GT-R can both be spotted sporting swollen arches. The Lamborghini Centenario shares cover star duties with the 2017 Ford Raptor, while new additions to the franchise include Ariel’s off-roading Nomad, the Koenigsegg Regera, and – appropriately, given the destination – the Ford Falcon GT F 351.

The game holds true to Microsoft’s promise of all future Forza games arriving simultaneously on PC via Windows 10. Players that buy the game digitally will be able to play across platforms, with their progress transferring from XB1 to PC and vice-versa. Playground Games took the time to highlight cross-platform play works online as well, showcasing the new 4-player campaign co-op mode on PC, the original Xbox One, and the new, smaller Xbox One S.

As mentioned, Forza Horizon 3 will be available September 27. We’ve got more details coming on the game shortly; for now, take a look at some of the images released below, and be sure to stop by our Forza Horizon forum section to discuss the game in more detail!

E3 2016Playground GamesTurn 10
The original comments for this post are no longer available.
Can You Beat the Impossible Gran Turismo Quiz?