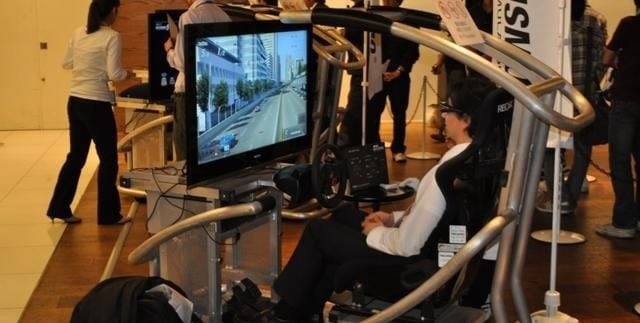 GT5 was shown off running in 3D at a special event in Tokyo last week. Gaming site 1up was on hand and provided their decidedly mixed reviews on the experience:

Gran Turismo 5 didn’t look markedly better or worse in 3D when compared to its showing at TGS last year. However, it suffered from the “pop-up book look” that many 3D images do–the game looked as if it was composed of several 2D images layered on top of each other. Movies that are filmed in 2D and brought to 3D via CGI tend to suffer from the same problem (think Clash of the Titans or Alice in Wonderland.)

Though 3D images can be hard to watch for a long period of time, GT5 was relatively easy to look at. This is thanks in large part to the game not using any strong depth of field effects. […] All objects in GT5, regardless of location, are rendered without any post-processing blur, so no matter where we looked on the screen, we could focus easily.

Of course, the “pop-up book look” won’t be an issue for players normal televisions, but the negative points are still unfortunate given the fact that many consider Sony’s desire to publish the game in 3D as a reason for its lengthy development time.

3D
The original comments for this post are no longer available.
Test Your Badge Knowledge With Our Car Logo Quiz