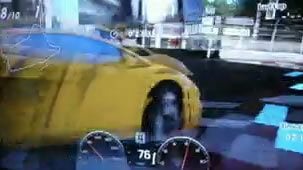 Here’s an example of when bad driving turned out to be a good thing, as it provides a quick (very quick…as in 2 seconds) but somewhat interesting peek at the scaled-down production car damage in Gran Turismo 5. As you may recall, there will be two types of damage models in the game: one for racing cars and one for standard, production cars. While the damaged Subaru WRX WRC car, with missing bumpers and doors, has become a rather familiar sight, the less aggressive damage modeling has remained a bit more mysterious.

Watch closely in the video above and shortly after 0:53, when the driver nails a yellow Gallardo going into the first turn of Tokyo R246, and you’ll see several dark scratches on the side of the car around the area of impact. Thanks to Tomaz for digging this up a few weeks ago!

Andrew Evans · Jan 30, 2010· Comments
It may be cracking on for a decade old now (yes, really), but Gran Turismo 5 still has a few secrets left to give.

Andrew Evans · Jan 30, 2010· Comments
The Gran Turismo world may be all about GT Sport and esports, but an older title is enjoying a second lease on life right now.

Kyle Patrick · Jan 30, 2010· Comments
No, your eyes do not deceive you. We’re talking about a game that’s fast approaching its ninth birthday. That’s because, thanks to a recent discovery in the community, it’s suddenly gained a huge number of tracks.

Jordan Greer · Jan 30, 2010· 49 Comments
When looking at the GT franchise as a whole, critics frequently rate the most recent games – GT5 and GT6 – as the least successful in the series’ history, for a wide variety of reasons. Those critics might be surprised to find that Kazunori Yamauchi actually agrees with them.

Jordan Greer · Jan 30, 2010· 30 Comments
When Gran Turismo 5 was released, something unusual in the game’s Kyoto Photo Travel Location caught the attention of our community: a curiously detailed little cat. He blinked, turned his head, looked around, and generally drove people crazy.

Michael Leary · Jan 30, 2010· 61 Comments
In a surprising turn of events a new update is available for Gran Turismo 5, version 2.17. This update modifies the game so that it is no longer necessary to connect to the discontinued online servers in order to download previously purchased DLC packages.

Jordan Greer · Jan 30, 2010· 122 Comments
One final update for GT5 has been released, version 2.16. This update modifies the game to function without connectivity to online services, which have now been discontinued.