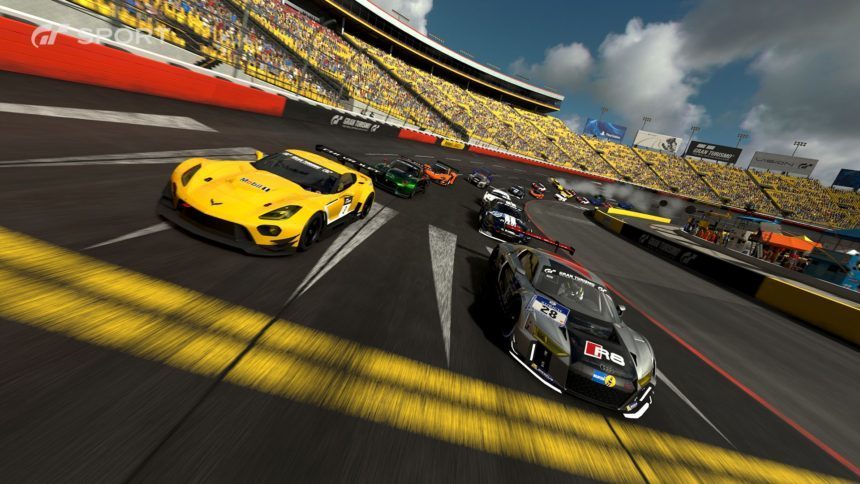 Here we are, at the last of the Polyphony-provided direct-capture footage of GT Sport. As we’ve seen every other location currently known in the game, there were no prizes for guessing the last pair of videos would feature Northern Isle Speedway.

The Polyphony-designed circuit is much smaller than previous ovals seen in the franchise, ensuring there’s almost always a car somewhere in your view, either forward or back. It’s an odd location to showcase a pack of high-downforce Gr.3 cars, but that’s precisely what we’ve got a double-dose of here.

The Corvette C7 and the rest of the pack head around the oval in the usual daylight setting we’ve seen before, while the awesome-looking F Type Gr.3 tackles it as the sun sets, following the pattern established with the other video pairings. Check them both out.

Sadly, after some positive signs from earlier direct-sound captures (check out this Hellcat footage for a reminder), both of these V8 powered sports cars come off sounding a little weedy. Admittedly, they are both Polyphony creations, so are technically not representative of any real world models. But the meaty growl of the Vette’s LT1 and the wild, angry sound of the Jag’s supercharged bent-eight are both conspicuous by their absences.

That wraps up the GT Sport direct-capture extravaganza that started at PlayStation Experience 2016. For a full recap, check out all the links below:

Gran Turismo Sport 435 Oct 19 by Andrew Evans
After a few complicated races in recent weeks, this week’s new set of GT Sport Daily Races is a return to simpler times. It’s a case of picking how fast…

Gran Turismo Sport 435 Oct 12 by Andrew Evans
A new set of GT Sport Daily Races starts today, with something of a focus on cars with the engine in the middle. There’s three races as usual, with two…