This month is going to be packed with four races from the F1 circus. The second of those four feature races, taking place at Silverstone, home to the British Grand Prix, is set to kick off with the qualifying session in an hour’s time.

Codemasters have once again taken the opportunity to give a sneak-peek at the upcoming F1 2016 game by uploading an onboard lap of the Silverstone circuit to their official Youtube channel, with Manor Racing driver Rio Haryanto at the virtual wheel.

The last time we were given an in-game preview saw Red Bull Racing’s Max Verstappen providing a lightning lap around the Red Bull Ring in the RB12 – a perfect marriage of car and track. Today sees another young talent, though not quite as young as Verstappen, getting behind the virtual wheel to take us around the “Home of British Motor Racing.” 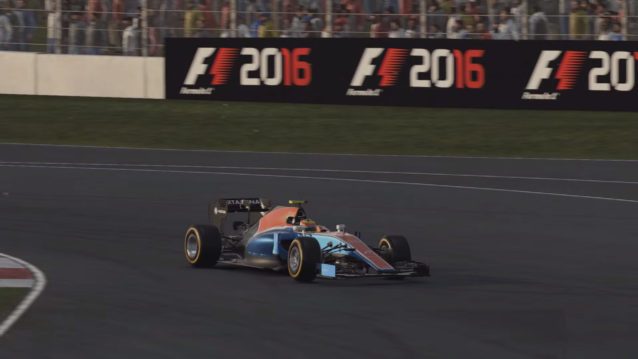 F1 2016 will be releasing onto the PlayStation 4, Xbox One, and PC platforms on August 19th, one week before the Belgian Grand Prix. The title will return its focus to an in-depth career mode, and will simulate the feeling of the sport both on and off the track.