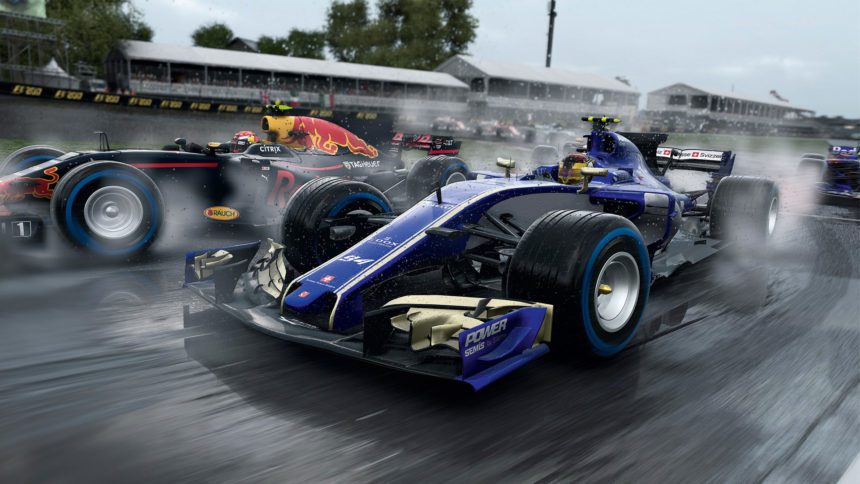 The first things you’ll notice are the improvements in the graphics department. The water droplets on the visor, the spray from the other cars, the sheen of the water on the road — it’s all quite impressive. Even the way the sky changes and the clouds dissipate as the weather improves. It all adds to immersion of a game that’s really trying to be as realistic as possible this year.

Unfortunately for him, Greco gets a poor start. The manual clutch from F1 2016 has returned, but the starts are different this year. Drivers have less electronic aids than they did before and this is amplified in wet conditions. It shows in the game as Greco drops down a number of places off the start as he spins his rear tires in desperation to make up ground.

The AI looks to have seen some improvements, too. Into turn one, we see the rookie Pascal Wehrlein launch his Sauber up our inside, almost colliding with Romain Grosjean in the Haas. A driver with less experience like Wehrlein is more likely to make these sorts of moves. It’s good to see developer Codemasters has implemented it into F1 2017.

Throughout the whole video, AI improvements are evident. Drivers battle side by side, sometimes even three-wide through a corner. They defend their spot and attack your position — they want to win just as much as you do.

When we get up to speed, we get to see why these drivers are paid by the millions. At high speed and in the slipstream and spray of another car, visibility is virtually zero. Where do you hit the brakes when you come to the next corner? You can’t see the corner until you’re a few hundred feet away from it.

It’s all about feeling the car underneath you, flying by the seat of your pants. You only have a split second the react in these conditions or it’s race over. Oh, and there’s 19 other cars on track that you can barely see either and you have to avoid them, too.

It’s now time to reduce the fuel mix and make sure we don’t go faster than the lap time delta to avoid a penalty. Granted, all of this was in last year’s game but retaining features like these make you feel like a real F1 driver. It’s something F1 2017 looks to simulate well.

Keeping the car pointing in a straight line looks like a real challenge. Codemasters has always done a great job of simulating the difficulty of wet conditions in its F1 games, but F1 2017 looks to have turned it up a notch.

The 2017 cars are faster with more grip, but are much harder to drive if you get it wrong. There’s close to 1,000 hp on tap and a weight less than 1,700 lb. Couple that with no traction control and a ridiculous amount of torque being thrown at the rear wheels and it’s no wonder it’s such a challenge. Greco is often fighting the car on acceleration and through the slow speed corners, something we see on TV all the time.

The most impressive thing seen in the video, though, is the drying line. Again, this is something that Codemasters has, well, mastered since it first took over the F1 reigns back in 2009. It’s also something that Slightly Mad Studios is aiming to perfect with its Live Track 3.0 feature in the upcoming Project CARS 2. Which game implements it best will be an interesting comparison to make in the coming months. Project CARS 2 will certainly be the more extreme of the two games since you’ll be able to turn Spa into a winter wonderland.

Formula One cars are essentially the world’s most powerful vacuum cleaners. Nothing dries up a wet track faster than 20 F1 cars hurtling around it at 200mph. Like in a real race, as time goes by and the cars go round, a darker, dry line appears where the racing line is. The Pirelli Full Wet tires can shift 13 gallons of water per second, so once the rain eases up it doesn’t take long for the dry line to appear.

This creates another challenge. The wet weather tires will overheat if they’re running on dry tarmac for too long. So you have to veer off the dry racing line onto the wet stuff to cool them down. A further challenge arises when we hit the pits for Intermediate Wet tires. These tires dispense less water than the Full Wets. So if we venture off the racing line onto the wet tarmac, we’re going to lose grip and spin out.

Driving in these conditions is like walking on a tightrope. It’s a problem the drivers have to deal with in real life and it’s problem we’ll face in F1 2017. Who handles it best will split the men from the boys.

Codemasters
18 Comments Discuss this post in our forums...
F1 2020 Review: A Winning Formula

F1 2020 14 Jun 5 by Andrew Evans
F1 2020 will be with us next month. We’ve seen plenty of the game in action, with previews of the new Circuit Zandvoort and Hanoi Street Circuit tracks, but Codemasters…