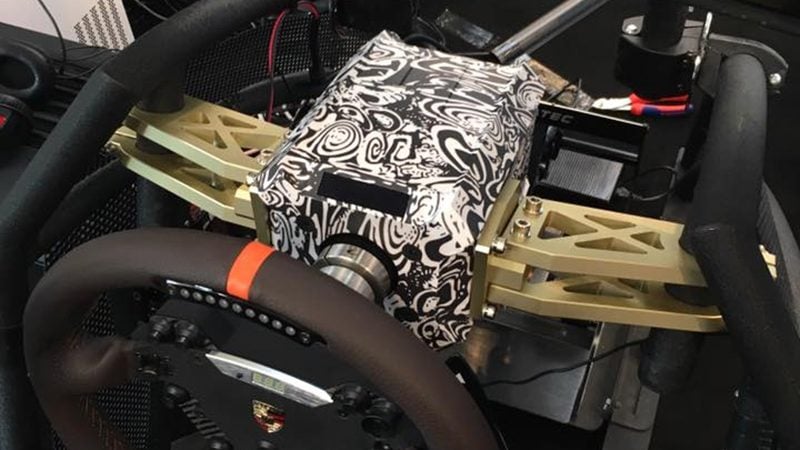 New images snapped last week at the Sim Racing Expo have given us our first proper look at the Fanatec’s direct drive wheel.

As the steering wheel market starts to move forward into a new standard, Fanatec has been keeping surprisingly quiet on its first DD offering. Launching as part of the new Podium Series, Fanatec aims to set a new standard for functionality, performance and durability with the wheel.

The photos come to us care of Team Readline’s Facebook. Just like automaker prototypes out in the wild, the wheelbase is covered in black and white camo. Clearly Fanatec doesn’t want to ruin the curves of its new prized creation just yet.

Even with the clever disguise, the DD wheel looks like an impressive piece of hardware. The base looks compact yet sturdy, fitted on what appears to be a very serious wheel mount. In other words, Fanatec looks to have created quite the powerful beast.

One thing is for sure, this peripheral isn’t going to be cheap. As with all Fanatec products, the Germans will be looking to offer high quality first and foremost. That was certainly the case with the CSL Elite PS4, which we reviewed back in July. Fanatec CEO has said price estimates within the community have been quite accurate — our guess is right around a cool grand.

The full gallery of images is included below for your viewing pleasure. Details are thin at the moment, so we’re still in the dark over aspects like price and release date. What we do know is that the first generation DD Podium Series base will not be compatible with PS4. Importantly, the public debut of the wheel means we can’t be too far away from more information.

Andrew Evans · Sep 20, 2017· Comments
Serious sim racing can be an expensive business. Sim racing kit will set you back hundreds of dollars — or more — and that’s without considering a sturdy place to mount it.

Andrew Evans · Sep 20, 2017· Comments
After more than a year of waiting, Thrustmaster has finally revealed its new Direct Drive wheel: the T818.

Andrew Evans · Sep 20, 2017· Comments
If you’ve been waiting to get your hands on the official wheel of Gran Turismo 7, the Fanatec Gran Turismo DD Pro, now might be your chance as Fanatec is once again carrying stock — but you’ll need to be quick.

Jordan Greer · Sep 20, 2017· Comments
Logitech has just revealed the G PRO Racing Wheel, and it’s a product I never thought it would actually make. The company has a long history of producing reliable, entry-level sim-racing hardware, but it has always ceded the higher-end of the market to companies like Thrustmaster and Fanatec. With this new direct-drive wheel, all of that changes in a pretty big way.

Andrew Evans · Sep 20, 2017· Comments
In a surprise shot across the bows of high-end driving wheel manufacturers, Logitech has announced its new direct-drive G PRO wheel — and it will be available from today, for both Xbox and PlayStation.

Andrew Evans · Sep 20, 2017· Comments
After a brief tease earlier in the year, Thrustmaster has announced it will be revealing its first ever direct drive steering wheel base on November 17.

Michael Leary · Sep 20, 2017· Comments
If you’ve been waiting for an official “pro” controller from Sony, today’s your day. Sony has revealed the “ultra-customizable” DualSense Edge at Gamescom Opening Night for the PlayStation 5.