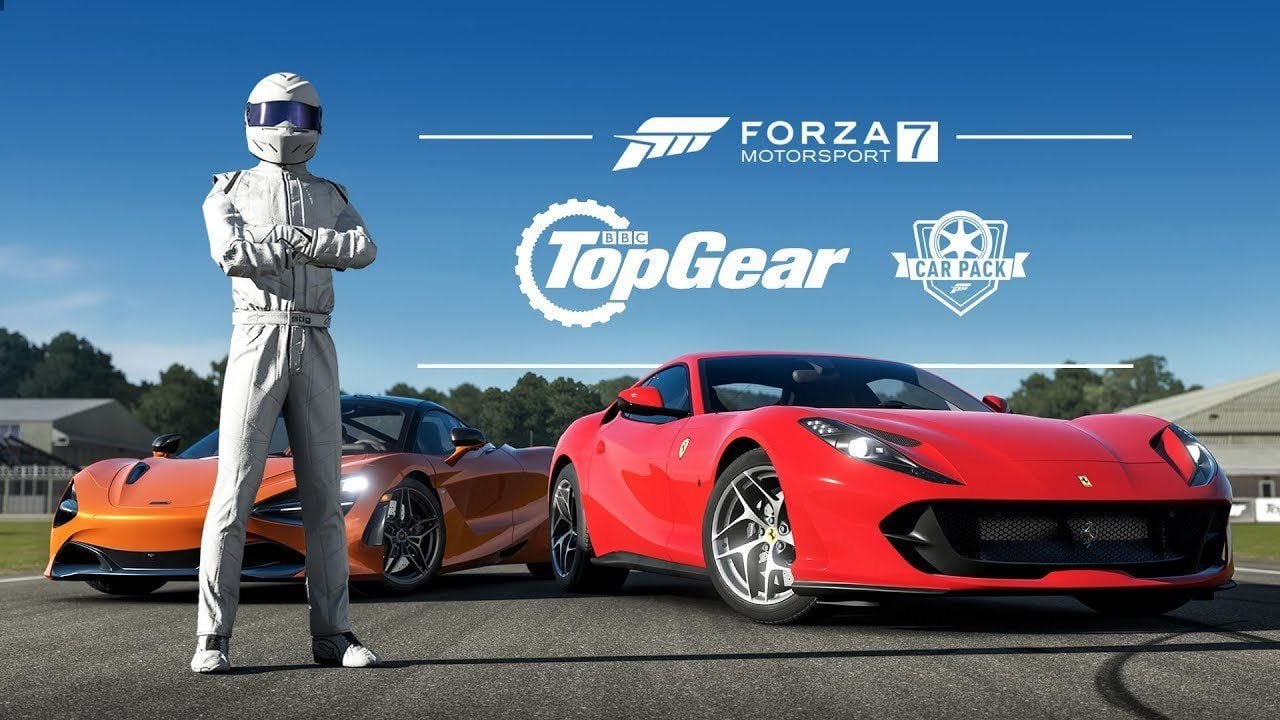 Turn 10 has pulled the covers off the latest Forza Motorsport 7 car pack. With Top Gear as the title sponsor, it’s an eclectic mix of modern and classic metal, and brings two new manufacturers into the Forza family.

Forza fans found out about the Top Gear Car Pack, set to land July 10, via yesterday’s Forza Monthly show. There, each of the seven following new cars got some time in the spotlight:

Two of those cars were known quantities. Turn 10 showed off the 812 Superfast last week, and announced the McLaren 720S back in June.

As a contrast, the VUHL and Exomotive are both (welcome) surprises. Both minimalist track weapons are new marques to the franchise. VUHL is a Mexican sports car manufacturer, and the 05RR is the wildest model yet. With a full carbon body and a turbocharged, 385hp Ford-sourced engine, it boasts a hypercar-baiting power/weight ratio.

The Exocet Sport looks like an Ariel Atom drawing you were forced to pen from memory alone. But it’s a Chapman-esque stew of some of the best parts of the automotive kingdom: it only uses what’s necessary, and eschews everything else. The bones are from the Mazda Miata, onto which owners add an Exomotive kit to transform the car. Add in that most ubiquitous of project car engines — a Chevy LS — and you’ve got the Exocet.

Rounding out the pack is a modern race car and two classics. The KTM is the first GT4-spec car to land in FM7, while the Alfa and Porsche are reminders of their respective marques’ histories.

The Top Gear Car Pack will run the usual $6.99 price on the Xbox Store. If you’re a Car Pass holder, it’ll be free, as Turn 10 extended the pass to cover this (and one other currently-unknown pack).

Check out the trailer for the Top Gear Car Pack below:

Andrew Evans · Jul 3, 2018· 8 Comments
Microsoft and Special Olympics are once again partnering on a gaming event for athletes involved in the disability sporting movement, and Forza Motorsport 7 will form part of the program.

Andrew Evans · Jul 3, 2018· 7 Comments
Forza Motorsport 7 will shortly be no more, as Microsoft moves the game into end of life status this September.

Michael Leary · Jul 3, 2018· Comments
The Xbox Game Pass subscription service continues to grow, and next month sees the addition of a fan favorite. With DiRT Rally 2.0 leaving the service on October 1, it begs the question: what’s going to take its place for sim racers? Now there’s an answer, Forza Motorsport 7.

Gary Slater · Jul 3, 2018· Comments
Fans of the Forza series who spend time creating their perfect liveries have a good reason to show them off to the world once more. Following an absence of almost a year, Turn 10 has announced that the official livery contests will return.

Gary Slater · Jul 3, 2018· Comments
The potential for virtual racing esports to feature in marquee sporting celebrations is something that has been the subject of substantial attention in recent years. It’s a subject that the International Olympic Committee has discussed, and Japan’s National Sporting Festival now includes Gran Turismo Sport as one of its events annually.

Kyle Patrick · Jul 3, 2018· Comments
On its latest episode of Forza Monthly, Turn 10 officially revealed all the details for the fourth season of the Forza Racing Championship.

Kyle Patrick · Jul 3, 2018
Turn 10 has released the latest — and final — update for Forza Motorsport 7. Weighing in at 570MB, it introduces another free Porsche, updates to the Forza Race Regulations system, and more.

Michael Leary · Jul 3, 2018· Comments
The next Forza Monthly live stream is near, and it looks like an interesting one. As you can see in the image above, the car being showcased is none other than the Porsche 718 Cayman GT4 Clubsport. Going by past events, this suggests the GT4 racer is on its way to the game very soon.

Kyle Patrick · Jul 3, 2018· Comments
A designer from Turn 10 has revealed a variety of cars from Forza Motorsport 7. The catch? We’ve never seen them in the game, nor Forza Horizon 4, at least not yet.