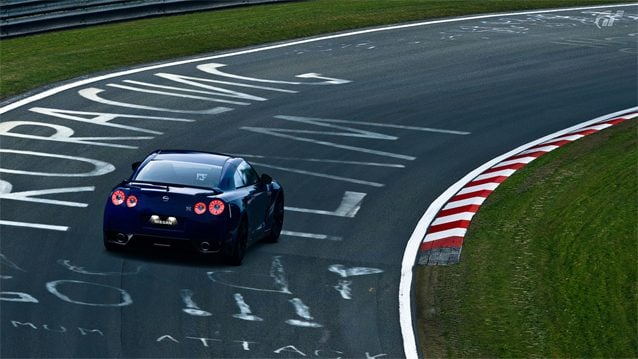 Announced today on the official Gran Turismo website (and through the in-game news function) is a new feature to appeal to all the Gran Turismo shutterbugs, named “Photo Stream”. In essence this feature allows you to share your finest images, anonymously, with the entire Gran Turismo community through an as-yet unpublished URL:

With the coming Gran Turismo 5 update planned for March 2012, we will be starting a new service on gran-turismo.com worldwide, called “Gran Turismo 5 Photo Stream”.

In GT5 Photo Stream, photographs taken in the photo mode of Gran Turismo 5 and set to “Share” will be shown in a list on a webpage, and be made possible to view by anyone.

The photographs will continue to change periodically, the online ID’s of the photographer will NOT be shown or made public, and there is no evaluation system or the like for the photographs. This is a service which simply introduces what kinds of photographs are being taken in Gran Turismo 5 by players around the world.
Please be aware that any photographs set to “Share” after the start date of this service will be released publically on the web by GT5 Photo Stream.

We hope you’ll look forward to the start of this new service.

At present gamers can view a specific user’s Shared images on gran-turismo.com, but only if the user is on their friends list. While Photo Stream will be anonymous it will allow you to browse photographs made by any user so long as they have been set to “Share”, as a showcase for the Photomode part of the game.

Thanks to VYPA-SQUAD_Ace for the first tip!

GT5 UpdatesPhotomode
The original comments for this post are no longer available.
Test Your Badge Knowledge With Our Car Logo Quiz