If you want to represent your country at an Olympic level for Gran Turismo, your chance is finally here. The official Olympic Virtual Series Time Trial for GT Sport starts today, and players have ten days to qualify.

There’s two stages to the Olympic competition in GT Sport. The first stage runs over the next ten days and takes the form of an Time Trial event within Sport Mode. It’s a relatively simple format, which merely requires players to set the best time they can, just like all the other Time Trial events in the game.

Players will be driving the Toyota GR Supra Racing Concept around Tokyo Expressway South Inner Loop — the one with the docks section. There’s no limit to the number of attempts you can make, so just set the best time you can. The event closes at 1459 UTC on May 23. 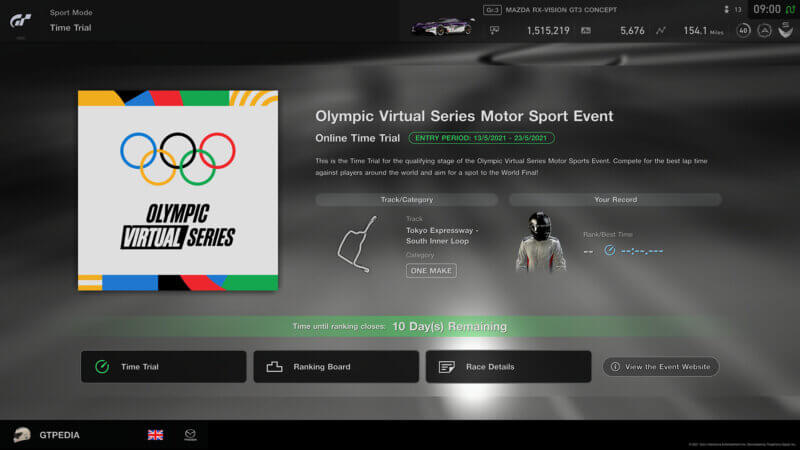 Update (May 19): All players who register a valid time will receive 400,000cr as a reward, with the credits hitting their game in early June.

The 16 best eligible times then advance to the World Final, but there’s a catch. As well as the standard regional split, there’s a limit of one participant from each eligible nation. Europe will send seven representatives, Asia will send four, South American and North and Central America will send two each, and Oceania will send one.

When the final takes place on June 6, the 16 finalists will take part in three races, all in Toyota machinery, with the last race worth double points. Although we don’t have full details on the race length, tires, or fuel/tire use, the schedule is as follows:

At the end of it all, one player will become the first Gran Turismo Sport Olympic champion. Good luck to all who enter!