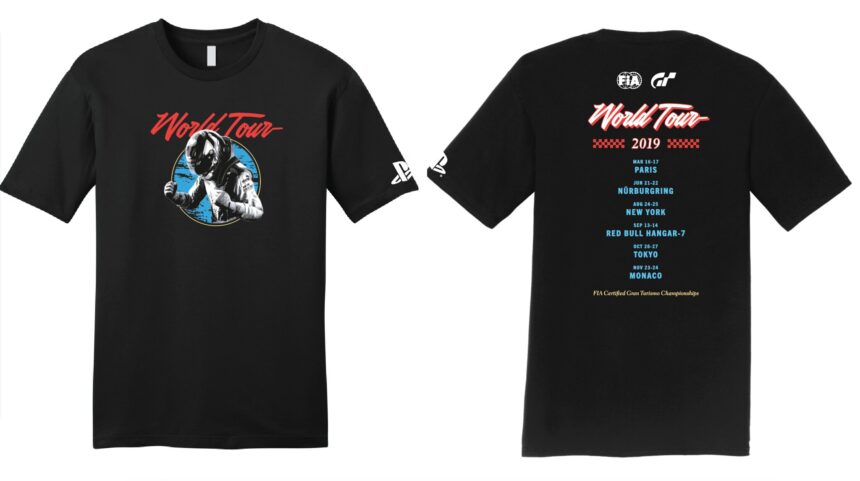 We’re excited about the season finale of the GTPlanet League on Sunday, and to celebrate, we’re giving away a special prize: an official Gran Turismo t-shirt!

As any die-hard fan or collector will tell you, official Gran Turismo merchandise is hard to come by, but this 2019 Gran Turismo World Tour shirt is especially rare. It was only available at the PlayStation Theater in New York during the World Tour event back in August, and once they were gone, they were gone.

I was there and purchased an extra; now I’m giving it away! So… how can you win it?

Get ready for quite a show, too… After surviving the elimination tournament, two of the top teams in sim-racing — Team Redline and Williams Esports — remain to fight for the championship. Each roster includes some of the elite Gran Turismo players of the world, from Redline’s Mikail Hizal to Williams’ Adam Suswillo, so expect quite a battle.

After the championship match, our commentary team will tell you exactly how to enter the contest. The show starts Sunday, October 20, at 18:00 UTC (click here to convert to your local time zone).

The best place to watch is on our YouTube channel, so just subscribe, turn on notifications, and set a reminder for the live stream below!

Gran Turismo Sport 1740 Feb 17 by Andrew Evans
GT Sport‘s first World Tour event of the year is still fresh in our minds, but already it’s time to prepare for the next stage. The Pre-Season for 2020 FIA…

Gran Turismo Sport 483 Feb 16 by Jordan Greer
Japanese driver Takuma Miyazono has taken his first World Tour win with a victory in Sydney that could barely be any closer. Miyazono took the checkered flag by a margin…

Gran Turismo Sport 483 Feb 15 by Jordan Greer
It’s the final day of the first GT Sport World Tour of the year in Sydney, and that can only mean one thing: the Nations Cup final. There’s plenty hanging…

Gran Turismo Sport 483 Feb 15 by Jordan Greer
The BMW team of Nicolas Rubilar, Coque Lopez, and Randall Haywood put on a dominating performance at the first Gran Turismo World Tour event of 2020. Starting on pole in…