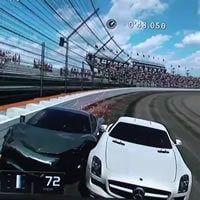 GTPlanet user Rated-M3 came home from his local Best Buy store after playing the Gran Turismo 5 kiosk demo and was kind enough to share his detailed impressions for those of you who may not be able to check it out for yourself. From his forum post:

Well on my way home from Baltimore today, I stopped by a confirmed Best Buy in Glen Burnie. I played it for about an hour since my local Best buy doesn’t have it The controller was shot unfortunately, the right joystick was worn to where it was tilted down a tad bit. The right joystick is in the button configuration as Up = gas, down = brake. So, the car was constantly braking which forced me to use it for gassing and braking. You cannot change the buttons as the options menu is locked. I’m used to driving on a controller configuration similar to NFS: Pro Street, which I don’t even use a controller. So my driving sucked. After a couple of races I became more interested the damage.

The Physics seemed solid on all the cars. It had a different feeling to it than Prologue. For example, the body roll felt much more realistic compared to Prologue where everything felt like flat-out understeer. It was also visible, the car would lean on either side due to the g-force. The grass didn’t suck you in like in Prologue. It has a different feel to it, but it is still a slow ride out of the grass. Downshifting while turning is now detrimental, meaning the rear end breaks loose from the higher revs. Power cars with no traction control are prone to spin outs, even on R3s, could just be the suspension though. Having driven on a controller, I cannot give a true comparison to Prologue or the TT demo. All this was experienced under Professional. I tried one game in Beginners and it a huge improvement from Prologue. The car did not handle unrealistically well like in Prologue’s standard physics. Instead it seemed to just handle better maintaining the characteristics of the car. Drafting takes effect at a longer distance, not to the extent of Prologue. Professional physics drafting seemed more realistic, about 2-3 car lengths on Indianapolis. In beginner it seemed to drag you in faster than in professional as well. For tires, the N tires seem to be much more improved. They aren’t as bad as in Prologue. S tires are in between the feeling of N and R tires.

The damage was great. Almost accurate as far as speed and collision points. I say this because in the other demos at game shows, people were eating the wall at 100+ MPH and barely hurt the car. Not the case here. Damage appears on all 4 sides of the car. The Nascar is the only car that’s hood pops open. It is also the only car to shatter the rear quarter plexi-glass. THE CARS WILL NOT FLIP OVER. I tried a hundred times and the cars will only go air borne. Damage does affect car performance, not sure if it is mechanically or aerodynamically.

The AI drive a lot smarter, sometimes I felt they even hit me back after I hit them. They try to avoid collisions better than in Prologue. They themselves make contact with other cars and the wall sometimes. Cars will not do stand still burn outs, they do crazy awesome donuts though. The graphics looked a bit better than Prologue, but not by a long shot. You cannot destroy your headlights so you can’t see in the dark either. Debris kicked off the ground: Grass, dry grass, gravel, dirt.

The overall review: I’m pretty happy with it, it will definitely be a better experience on the wheel. I think the physics and damage is only 75% of what will actually be in the final product.

I thank my wife who got bored recording me the whole time lol.

Thanks to Rated-M3 (and his wife!) for sharing this info with the community!

Andrew Evans · Sep 9, 2010· Comments
It may be cracking on for a decade old now (yes, really), but Gran Turismo 5 still has a few secrets left to give.

Andrew Evans · Sep 9, 2010· Comments
The Gran Turismo world may be all about GT Sport and esports, but an older title is enjoying a second lease on life right now.

Kyle Patrick · Sep 9, 2010· Comments
No, your eyes do not deceive you. We’re talking about a game that’s fast approaching its ninth birthday. That’s because, thanks to a recent discovery in the community, it’s suddenly gained a huge number of tracks.

Jordan Greer · Sep 9, 2010· 49 Comments
When looking at the GT franchise as a whole, critics frequently rate the most recent games – GT5 and GT6 – as the least successful in the series’ history, for a wide variety of reasons. Those critics might be surprised to find that Kazunori Yamauchi actually agrees with them.

Jordan Greer · Sep 9, 2010· 30 Comments
When Gran Turismo 5 was released, something unusual in the game’s Kyoto Photo Travel Location caught the attention of our community: a curiously detailed little cat. He blinked, turned his head, looked around, and generally drove people crazy.

Michael Leary · Sep 9, 2010· 61 Comments
In a surprising turn of events a new update is available for Gran Turismo 5, version 2.17. This update modifies the game so that it is no longer necessary to connect to the discontinued online servers in order to download previously purchased DLC packages.

Jordan Greer · Sep 9, 2010· 122 Comments
One final update for GT5 has been released, version 2.16. This update modifies the game to function without connectivity to online services, which have now been discontinued.