There’s one final chance for players to qualify for the 2021 International GT League World Series today, and you’ll be able to watch it live right here on GTPlanet.

The IGTL World Series is an event organized by a group of GT Sport’s best drivers, for players who have reached the top A+ ranking in the game. After a successful 2020 debut, which saw the high entry standard rewarded with high quality, high speed racing, the series is back for 2021.

So far we’ve seen ten drivers qualify from the five selection events. Quinten Jehoul and Nicolas Romero were first through, in the GT Nostalgia race, with Edward Williams and Christian Malkii coming out on top in the Americas Classic.

The third round saw Will Murdoch and Tristan Bayless qualify from the Vintage Challenge — a second chance for Murdoch — and Miroslaw Kravchenko and Thomas Labouteley won through the Midnight Expressway. 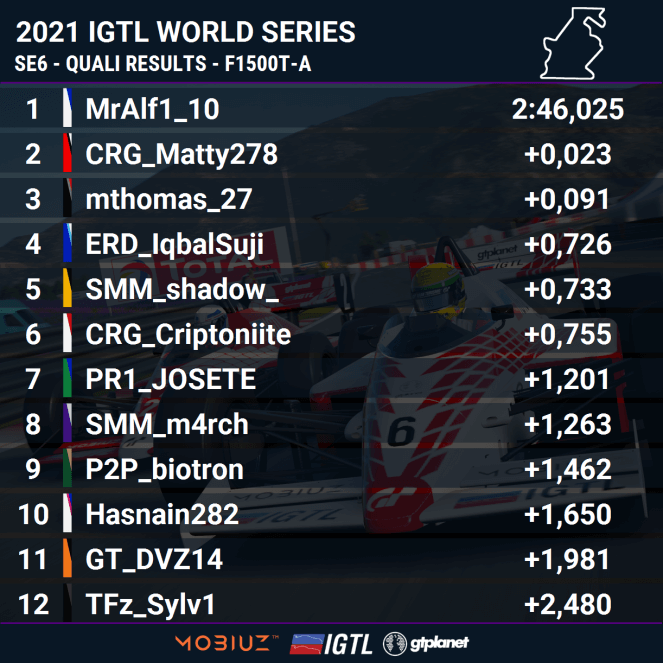 This week’s event could be the most challenging yet, as players will need to keep on top of the peaky, turbocharged F1500T-A, a fictional car inspired by mid-1980s F1 machines like the Lotus 97T. Concentration will need to be high, not least because the drivers will be racing around the large and complex Circuit de Sainte-Croix course, on the reverse direction C layout.

A little tactical nuance for this week’s race comes in the tire selection. For the 29-lap race, drivers will be allowed to use Racing Medium and Racing Soft grades, but they’re only allowed a single set of the Soft options. With the race distance likely requiring two stops, there’s a good chance we’ll see three different groups going fastest at any one point.

Again, there’s a high level of competition for this final round, with two official GT Sport World Tour drivers in the pack: Matthew Thomas and Jose Serrano. However they’ve only qualified third and seventh, and only a top-two finish will be good enough to qualify. You can catch the whole event below when it starts today at 1900 UTC:

Once the final two spots are filled, the IGTL will move on to its full World Series season. This will consist of a GT3 Masters top category with the 12 qualified drivers in Gr.3 machines, and a GT4 Invitational class for Gr.4 cars and drivers who raced in the selection events but didn’t manage to qualify. There’ll also be an MX-5 Challengers series for invited content creators and IGTL supporters.

GTPlanet will broadcast all of the races in the all three tournaments through the rest of the year.