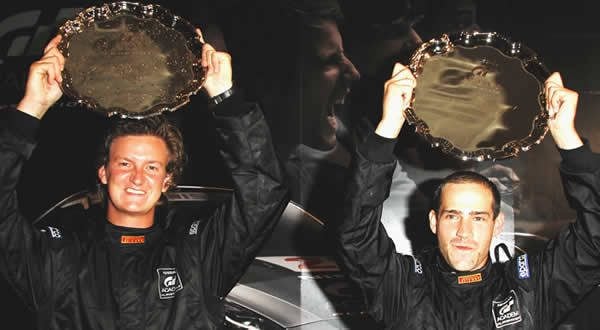 Djie of granturismo5.nl managed to dig up a Dutch press release by SCEE which explains the GT Academy Finals competition in great detail, describing the drama of the final day of competition which ultimately left Lucas Ordoñez and Lars Schlommer in the winner’s circle.  New photos from the event were also released today, showing the Gran Turismo livery on a pair of new Nissan GT-Rs and Silverstone’s own open-wheeled formula car.  The competitors themselves have joined the discussion in our forums, and I would like to personally welcome each of them to our growing community! Now, for the rest of us, here’s an interesting read of how it all went down in the last day of competition: 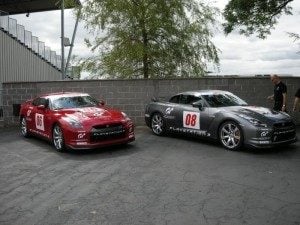 GT Academy: Final Day
Wet conditions test contestants to the limit as the final day of the GT Academy gets underway at Silverstone… The final eight: Lucas Ordoňez, Spain; Lars Schlömer, Germany; Chris Midmark, Sweden; Fabrice Bernard, France; Arnaud Lacombe, France; Luca Lorenzini, Italy; Giacomo Cunial, Italy & Matthew Gordon, UK.  For the final day of racing the scoreboard was cleared meaning the previous leader boards became irrelevant.  This opened up the competition and meant that it was all left to play for.

The Dog Fight – Nissan 350z Style
Following an early night the final eight competitors woke for the final day of driving and the culmination of the GT Academy.  They travelled to Silverstone in poor conditions-heavy rain and thick fog.  These conditions led the GT Academy judges to alter the order of events for the day putting the contestants under unforeseen additional pressure. Rather than racing the single seaters the final eight were placed in the Nissan 350Zs straight away for the Dog Fight Race.  Following ten laps from all the drivers the weather improved meaning drivers were ready to take on the single seaters for the final time.  With all lap times recorded the GT Academy judges retired to make their first important decision of the day – which two competitors to eliminate at this stage.

Two competitor’s hopes dashed but six remain hopefully of victory
After a tense wait for the competitors the judges kept the eliminations brief.  First to be asked to leave the GT Academy was Giacamo Cunial from Italy and second Matthew Gordon from the UK.  Both had recorded the slowest lap times in the single seaters by a long way.  Both drivers were interviewed following their departure and although both were clearly disappointed they were calm and not surprised.  They were aware their driving had been slower than the other competitors. 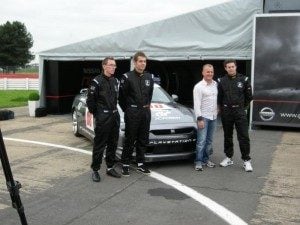 The fast and the furious…only the quickest will make the final cut
After lunch the remaining six participants prepared for the second stint of the day in the Nissan 350Zs.  The judges set up three races with two cars.  Following each of the races the slowest driver dropped out leaving three to race for 350Z glory – Lucas Ordonez from Spain, Luca Lorenzini from Italy and Chris Midmark from Sweden.  These three drivers then raced again for 10 laps with the clear winner being Lucas from Spain.

Contestants face the penultimate challenge behind the wheel of the GTR
All six finalists then prepared to drive the Nissan GTR accompanied by judge and experienced racing driver Rob Barff.  One by one they raced three laps with Rob sat in the passenger seat.  Rob used this time to assess each driver’s car control, style and approach to driving to give the judges an insight they hadn’t had previously.   The GTR racing brought the day of driving to a close for the competitors with one final challenge left to face – an interview with the whole panel of GT Academy judges.

Time for the judges to make the final decision
After intense questioning the judges reconvened to make the final all important decision-who would be the two overall winners of the GT Academy and win the ultimate prize- two seats in the Nissan-backed team at the Dubai 24hour race in January 2009. After a lengthy debate, all competitors were called for the final results.  The first to be congratulated but asked to leave the GT Academy was Luca from Italy.  Although a strong contestant throughout he had been the least consistent of the final six and not as accurate when driving.  He also drove the slowest lap times in the GTR. The second runner up to leave the Academy was Arnaud Lacombe from France. 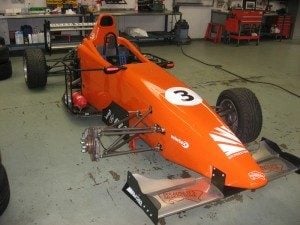 Arnaud had been consistent throughout in the GTRs and as he had no previous driving experience at all was considered by the judges to have extremely high potential.  The race that let him down was the 350Z Dog Fight Race.  Arnaud struggled with the fact the cars were all right-hand drives and due to a misplaced perception of the position of the car he did not realise he was missing corners on each lap therefore meaning he lost a lot of time.   In fourth place was Fabrice Bernard from France who drove well.  He was seen to be extremely trainable and motivated.  However, despite previous Autocross experience he was not top in terms of driving on the final day.

Third place announced in emotional final show-down
In third place was Chris Midmark from Sweden and this one was a tough decision for the judges.  Chris had started the strongest at the beginning of the week and remained consistent throughout.  However on the last and final day of driving he was seen to crack under the pressure of the competition.  He did not drive very well in either the 350z or the GTR.  It was decided that they could not have a winner who could not cope with pressure and therefore the GT Academy judges awarded Chris third place.

GT Academy winners announced and two gamers’ dreams come true
Then finally the two winners who would take their places at the Dubai 24 hour race were announced.  Lucas Ordonez from Spain and Lars Schlommer from Germany were crowned the winners of the GT Academy. There was no debate amongst the judges that with the upcoming training Lucas could be an exceptional driver who is naturally talented.  He does have some history racing single seaters and karting but he was the clear winner time wise recording very fast times in all of the cars on the final day.  The only aspect of Lucas’ ability that was discussed was his level of commitment; however it was quickly decided that he did indeed have the necessary commitment to make it as a professional driver and part of the Nissan-backed team.  T 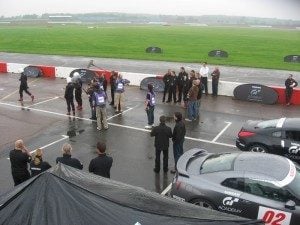 he judges were delighted to have him as the first winner of the GT Academy. The second winner Lars has no previous driving experience except for driving a taxi!  This makes his story even more special.  Lars was the competitor who took all the feedback he was given and put it into practice.  The judges and Rob Barth felt that Lars had the most ability to learn and adapt out of all the drivers.  He had one slip up when he lost the first stage of the 350Z race and he came off of the track extremely upset as he felt that he had just lost the competition.  After a talk with Rob and the psychologist he came back out to race the GTRs 120% focussed and really turned it around for himself.  In this activity he was awarded 9/10 for his confidence and beat most other drivers lap times.  The judges were also delighted with Lars as their second winner and are convinced that they have found the best two drivers possible.