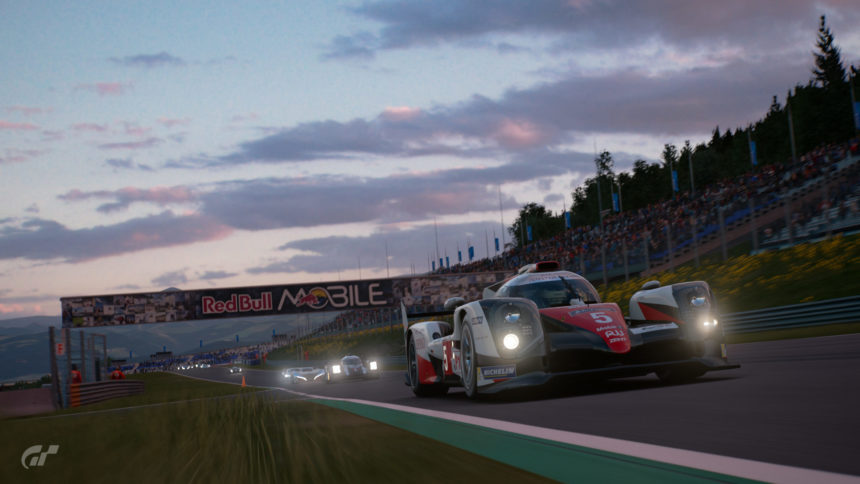 The inaugural FIA Online Championship is getting towards its closing stages. This weekend the second of the three regional finals is about to get underway — with GTPlanet right there in Madrid to call the plays.

Before all the action properly got into full swing, Polyphony Digital had a couple of dress rehearsals. The World Tour events, first at the Nurburgring and then at Hangar-7 in Salzburg, Austria gave the team the chance to nail down the format for live events before the pressure of the official tournament.

As the confetti settled in Salzburg, we got the opportunity to sit down with Kazunori Yamauchi and talk about the FIA events.

GTPlanet: Has this event been a success for you?

Kazunori Yamauchi: We haven’t had enough experience with this yet to say whether or not this was a success. This event is our second live event since the Nurburgring. I think that the gains we’ve had since then have been pretty major.

GTP: We were at the Copper Box event in 2016 and this seems like a whole different level!

KY: We’ve learned a lot of different things along the line and we’re in a better position now. I think that since the FIA and us have partnered, it’s been five years already. There’s still lots more to do!

GTP: How did you select the 25 manufacturers for the FIA Championship?

KY: There’s no real standard for it per se. We needed to make Gr.3 cars for each of those manufacturers for the FIA championship. To make those cars is quite a bit of effort. They’re actually very hard to make properly; to make an existing GT3 car is not as hard, but in order to make a fantasy GT3 car it takes a lot of effort in the design stages.

KY: To think about those kinds of designs and work them out is really fun. But at the same time a car that would normally take six months to produce takes a year to produce. That really ramps up the amount of work that our teams have to do.

GTP: Are there any more manufacturers coming to the FIA Championship?

KY: I don’t think that at the present time there’s going to be any additional manufacturers. I think the new GT3 cars that are being released by the manufacturers are something we’re looking at. Like the Nissan GT-R GT3; these cars already have a new model on the road.

GTP: When it comes to the FIA events, some players are unhappy that they — particularly the Top 24 races — are one-shot. If you get disconnected, you’ve lost your chance.

KY: There’s a lot of trial and error going on for a lot of areas in the game. There’s still room for improvement on a lot of it, so things can completely change. Online is just incredibly hard to work out!

GTP: How do you come up with the car/track combinations for the FIA events?

KY: Polyphony Digital actually has a few top players from the GT3/GT4 days who have become employees. They’re still top-class drivers today and those guys come up with the ideas for the races.

GTP: One feature mentioned early on was the Digital Racing License. Is that still in the works?

KY: It’s a major, major undertaking. It’s something that involves making a lot of decision together with all the automobile clubs around the world and the FIA. Rather than it being something technical that’s in the way, it’s about establishing a new set of rules. The automotive industry is a very conservative one so there’s a lot of things we have to work on. But it is a project that is moving forward!

Gran Turismo Sport 651 Mar 30 by Andrew Evans
There’s another set of three GT Sport Daily Races for players to get their teeth into this week, and it’s an unusual mix which feature no road cars at all.…

Gran Turismo Sport 651 Mar 23 by Andrew Evans
It’s all-change again as a new week is upon us, and brings a new set of Daily Races in GT Sport. This week’s trio contains two sets of race cars,…