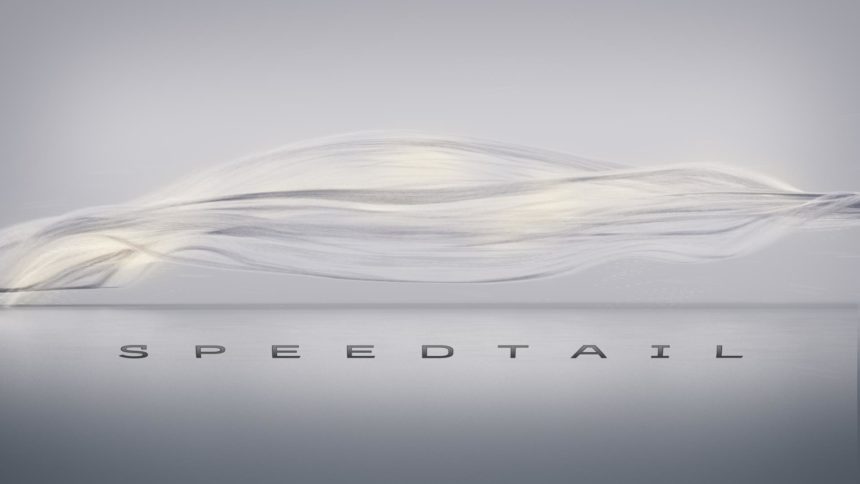 After toiling under the codename “BP23” for nearly two years, McLaren has now revealed the real name of its fastest ever car. It’s called “Speedtail”, and it will pick up the baton left by the McLaren F1, 20 years ago.

McLaren refers to the Speedtail as its “Hyper-GT”. It’s a car intended for prodigious mile-munching and an alarming top speed. In fact McLaren already says it will be able to exceed the company’s previous high watermark: 243mph from the McLaren F1. The company isn’t saying just how fast yet, but it seems likely that Bugatti, Koenigsegg and Hennessey will need to look over their shoulders.

Like the F1, Speedtail employs a three-seat, 1+2 cabin layout. The driver’s seat is central in the cabin, with two passenger seats flanking it, and set further back.

However, it will also feature tech pioneered by the P1. That comes in the form of its petrol-electric hybrid drivetrain. McLaren is some way off revealing the car’s finer details, but it seems likely it will use a derivative of the Senna’s four-liter, turbo V8. It should also employ additional electric power for zero emission city driving or on-demand grunt for that elevated top speed.

It’ll come in at £1.6m plus taxes, but you’re already too late to get on the list. 106 customers already reserved the car’s entire production run, before McLaren even revealed the car’s existence in November 2016. Each will get the chance to personalize their Speedtail through McLaren’s in-house MSO division, a customization specialist responsible for the all-carbon Senna and the rather awesome MSO X road racers.

As for the car itself, we’ll have to wait until McLaren reveals all in October 2018. Production should start soon after, ready for 2019 deliveries.