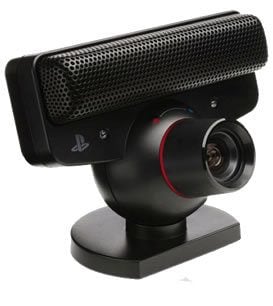 Other than my article on Gran Turismo 5‘s mysterious head-tracking feature, it hasn’t managed to get much press (though, admittedly, it’s only been mentioned once). However, it’s back in the spotlight once again after a Kotaku editor tried a GT5 demo with a Sony representative. Although the demo did not include head-tracking itself, the Sony rep tried to describe how its implemented as best he could:

The other stand-out feature I was told about was head-tracking. The game will support the PlayStation 3 camera, the PlayStation Eye. While one wasn’t hooked up at today’s event, it was explained that the device will track a player’s head movements. The goal is for the depth-of-field focal point far down the track to shift, matching your head movement. What you look at will be appear more clearly, in theory. So as you look a little to the right, the right part of what you see beyond your car may come more sharply into focus. But the car itself won’t turn with your head, of course.

The Sony rep explained that Polyphony’s goal is for players to feel like they are experiencing what real racers see. He noted that the feature was still a work in progress and couldn’t offer more details about how it works. From his gestures, I suspect the head-tracking will be responsive more to leans than to head turns, the latter of which obviously would make it hard to see the TV.

In other words, it would seem to suggest that GT5‘s camera movement will be more subtle and intuitive rather than exaggerated and abrupt, which is a very good thing.

Head Tracking
The original comments for this post are no longer available.
Test Your Badge Knowledge With Our Car Logo Quiz

Gran Turismo Sport 520 Apr 12 by Andrew Evans
A new week means a new set of GT Sport Daily Races to get to grips with, and this week’s trio of events brings a mixture of pace to satisfy…

Gran Turismo Sport 3731 Apr 5 by Andrew Evans
As well as announcing the new format for the 2021 season of the FIA Certified Gran Turismo Online Championship, Polyphony Digital has also revealed the largest expansion in eligible players…

Gran Turismo Sport 3731 Apr 5 by Andrew Evans
Kazunori Yamauchi has taken to the PlayStation Blog to announce a new-look format for the upcoming 2021 FIA Certified Gran Turismo Online Championship, the fourth season of the flagship esports…

Gran Turismo Sport 520 Apr 5 by Andrew Evans
There’s a fresh set of GT Sport Daily Races now available, with players taking race cars — albeit in name alone in one case — to three of the game’s…