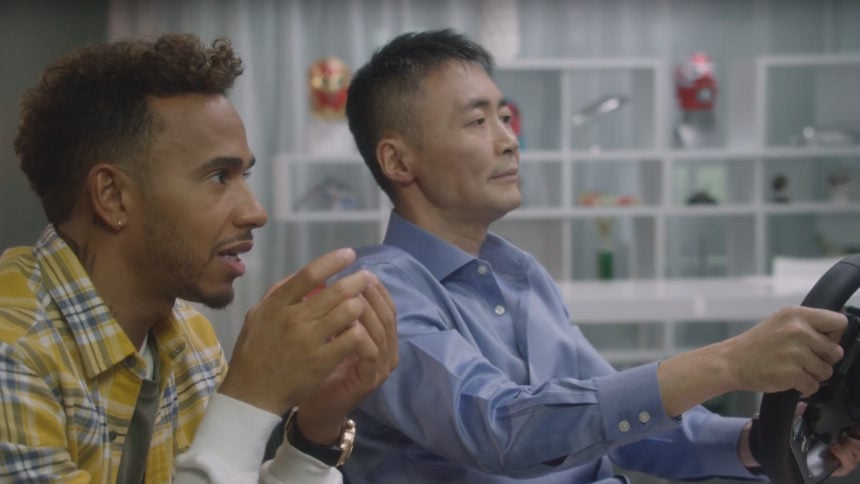 Play Gran Turismo Sport and Get Coaching From Lewis Hamilton

Three-time Formula One World Champion Lewis Hamilton may be well on his way to his fourth title, but he’s taking some time out to help Gran Turismo fans.

Hamilton is set to appear in Gran Turismo Sport as an in-game mentor. He’ll share his knowledge from over a decade of top-level motorsport with players, through a series of images, videos and interviews.

Whether your driving style matches his famously aggressive wheelcraft or not, all players are sure to get something out of it. After all, a spot of one-to-one tuition with the man who has achieved more F1 pole positions than any other driver in history can’t hurt!

It’s not the first time we’ve seen famous drivers integrated into Gran Turismo games. Hamilton’s great rival Sebastian Vettel drove the X1/X2010 prototype racer to reference laps in Gran Turismo 5. Few can forget Jeff Gordon’s input to the same game either, although his advice was less like tuition and more like a mild scolding.

Speaking of his involvement with Gran Turismo Sport, Hamilton said:

I have been playing Gran Turismo since I was a child, so to actually be part of the gameplay design has been an incredible experience.

From watching Lewis drive on TV all these years, I had an idea of how he might drive, but the experience of watching him drive in person was well beyond my wildest expectations. And I’m really glad to be able to share his driving and philosophy with the players in Gran Turismo.

Of course Yamauchi is no stranger to the race track himself, with thousands of miles logged at the Nürburgring 24 Hours. If even he can get something out of Hamilton’s tips, there should be something there for everyone.

You can watch the teaser video of the tie-up below:

Gran Turismo Sport 250 Oct 22 by Andrew Evans
The latest set of GT Sport Time Trials is now available, running for the next two weeks. It’s a bit of a change of pace this week, and a very…

Gran Turismo Sport 442 Oct 19 by Andrew Evans
After a few complicated races in recent weeks, this week’s new set of GT Sport Daily Races is a return to simpler times. It’s a case of picking how fast…

Gran Turismo Sport 442 Oct 12 by Andrew Evans
A new set of GT Sport Daily Races starts today, with something of a focus on cars with the engine in the middle. There’s three races as usual, with two…

Gran Turismo Sport 250 Oct 8 by Andrew Evans
There’s another set of new Time Trials starting in GT Sport, and taking us through the next two weeks. After some recent outings on dirt roads, it’s a return to…