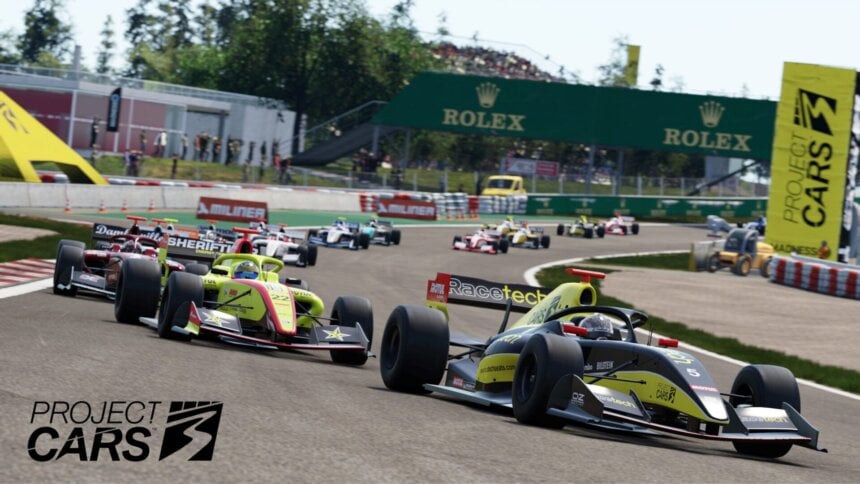 It’s only a few short weeks until Project CARS 3 is with us and, right on cue, Slightly Mad Studios has revealed more about the car and track content coming to the game.

We’ve had a few hints, and the odd car or track shown here and there, but today is the first time we’ve been able to look over the bulk of both lists. A website update over the weekend brought out over 90% of the contents of both categories, and the team at SMS is still adding to the list. That means that, for now at least, the official lists are not complete.

That said, there’s a few omissions at present compared to the Project CARS 2 track list. Fans will have already picked up on the absence of Circuit de Spa-Francorchamps, which has been confirmed as absent by the game’s online marketing director Nathan Bell. Indeed Spa has proven a tricky beast to pin down for many games recently, as demonstrated by its recent arrival in Gran Turismo Sport.

Also currently missing are Circuit de la Sarthe, Red Bull Ring and Circuit of the Americas, though the recently shown Porsche Leipzig track was also not in the original list (but has since been added) so there’s still some hope. Of course the big addition is the Autodrome Jose Carlos Pace — Interlagos — as shown in the game’s first reveal, and the majority of the PC2 list returns intact.

There’s several of the game’s fictional circuits yet to be revealed too. We’ve seen four so far — Havana, Monument Canyon, Shanghai, and Tuscany — but none are returning from previous games. In the build up to this today’s information release we have heard that at least Bannochbrae would return, so this list can also be treated as a work in progress for now. Interestingly the logo for the fictional Shanghai street circuit incorporates the course map of the real-world Shanghai International Circuit.

Update: Further changes to the list have now added Bannochbrae, along with other returning fictional roads and circuits. Consult the list above for the latest information!

As with the track list, the bulk of the car list is carried over from PC2, and there are some items yet to appear on the official list. We’ve seen plenty from the McLaren 720S GT3 in the game’s build up, but at the time of writing McLaren doesn’t even appear as a brand. The game’s big debut, the Chevrolet Corvette C8, doesn’t appear on the list as a road car; naturally this is something we’d expect to change in due course! Confirmed for the game though are the new Toyota GR Supra and the first console game appearance of the Lotus Evija supercar, along with the Gen2 Formula E.

Update: Additional changes to the list have added the McLaren brand and Corvette C8, while the Evija has been removed from, and then reappeared on, the official site.

We’ll be updating our GTPlanet Guide for Project CARS 3 as more information comes out, so keep your eye on that for a full car list. At the moment the official site lists 39 course locations with 100 layouts, and just under 170 cars.

Also available today are PC3 preorders. It’s available in the PlayStation Store and Microsoft Xbox Store for $59.99 (£49.99) for the base edition and $94.99 (£74.99) for the Deluxe Edition. The latter contains the Season Pass and three days’ early access. If you’re still undecided, there’s a new trailer too, which you can watch below:

Project CARS Series -1 Sep 18, 2020 by Andrew Evans
It’s been a good long while since we last heard anything about Project CARS Go, but it now looks like the mobile game is almost ready to, well, go. Slightly…

Project CARS 3 Jul 29, 2020 by Andrew Evans
Although it came as a bit of a surprise when announced in June, Project CARS 3 is almost upon us. The latest title in the series lands at the end…