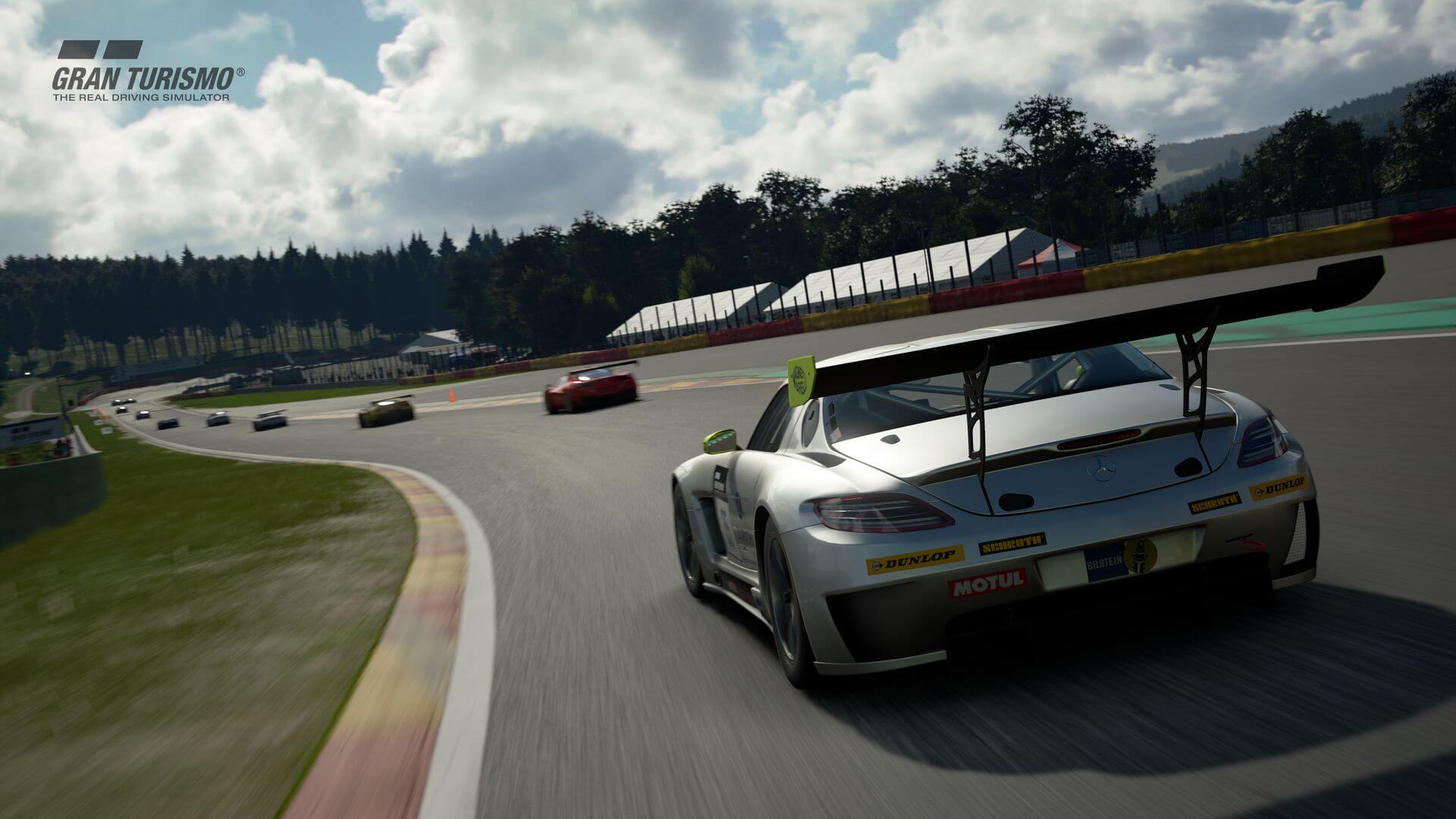 The update, officially known as 1.47, is available from today. It brings both a regular version of the Spa circuit and, for the first time in the game, a wet conditions version right from the start.

Despite appearing in both GT5 and GT6, the famous Belgian circuit seemed unlikely to come to GT Sport until fairly recently. There appeared to be a licensing fee impasse between the circuit’s owners and the studio. However, some time in August, the stalemate seemed to break and the track featured in the New York World Tour live event.

Fans had been waiting since then, but Polyphony Digital has been putting the track through quality control paces to ensure it’s fit for public consumption. With that process completed, the track has duly arrived.

In addition to the track, there’s four new cars — one of which made its name at the very same circuit — and all are new to the Gran Turismo series.

A more modern luxury German performance car comes in the form of the Porsche Taycan Turbo S. There’s no actual turbo here, because the Taycan is an electric vehicle — Porsche’s first full production EV. The name simply lets you know what kind of performance to expect in line with the rest of the brand’s cars, and it’s quite a lot. This model of Taycan can produce up to 750hp, enough to make it the fastest electric production road car around the Nurburgring Nordschleife. It’s the first of three Porsche models that will come to the game as part of a new partnership with the brand.

The Nordschleife is also linked to the third car, Lamborghini’s Aventador LP750-4 Superveloce, or SV. In 2015, the SV set a storming lap time of 6:59, as part of Lamborghini’s assault on the Green Hell with a series of sub-seven minute cars. The SV is an upgrade over the 2011 Aventador already in the game, coming with another 50hp and a fixed rear carbon-fiber wing.

Meanwhile, if you like things a little slower, the fourth car has barely anything to do with Nordschleife laps or 24 hour races. It’s Mazda’s entry level Demio hatchback — also known as the Mazda 2 outside Japan. The Demio is almost inextricably linked with Gran Turismo, having featured in one form or another since the very first game. This model is the car Mazda introduced in late 2014 in Japan to replace the old Ford Fiesta-based Demio. It uses Mazda’s new “Kodo” design language and entirely new, in-house developed technology known as “SkyActiv”. This particular car is also a rarity for Gran Turismo: a diesel road car.

As usual, there’s also some new rounds for the GT League single-player mode. They’re spread across the four levels, with two new rounds in the Beginner Group 4 Cup, two in the Amateur Real Circuit Tours, two in the Professional Nostalgic 1979, and one in the Endurance X2019 Series.

You’ll also find some new Scapes, centered on the new Circuit de Spa-Francorchamps. Along with the official “various other issues”, there’ll doubtless also be other undocumented changes that you’ll find discussed on our forum.

If you’re still waiting for the 2.6Gb update to download and install, you can watch this brief preview of the content coming your way:

Andrew Evans · Oct 31, 2019· Comments
Michelin, official Tire Supplier and Technical Partner of Gran Turismo, is staging a special online competition for players in south-east Asia and Oceania, with an all-expenses paid experience at Yas Marina, Abu Dhabi, for the winner.

Andrew Evans · Oct 31, 2019· Comments
A new set of Gran Turismo Sport Daily Races is now available, with the unannounced change to a four-weekly cycle now seemingly the standard from this point forward.

Andrew Evans · Oct 31, 2019· Comments
Following on four weeks from the last set, a new set of Daily Races is now available in Gran Turismo Sport as players get used to the new scheduling for the 2017 title.

Andrew Evans · Oct 31, 2019· Comments
For the first time in nearly a month, there’s a new set of Daily Races in Gran Turismo Sport for players to enjoy for the foreseeable future.

Andrew Evans · Oct 31, 2019· Comments
It’s the inevitable fate of any game that, once it is succeeded, it will eventually wither away as support is withdrawn. While this process usually takes months at a minimum, GT Sport seems as if it could be sidelined in record time.

Andrew Evans · Oct 31, 2019· Comments
Despite being superseded by Gran Turismo 7, GT Sport’s Daily Races seem to be continuing on their weekly cycle — for the time being at least.

Andrew Evans · Oct 31, 2019· Comments
Although Gran Turismo 7 is now out, GT Sport shows no signs of slowing down any time soon, with a new set of Daily Races now available to players.

Andrew Evans · Oct 31, 2019· Comments
Gran Turismo Sport will finally be superceded by Gran Turismo 7 this week, but there’s still plenty to be getting on with in the current title — starting with a new set of Daily Races.