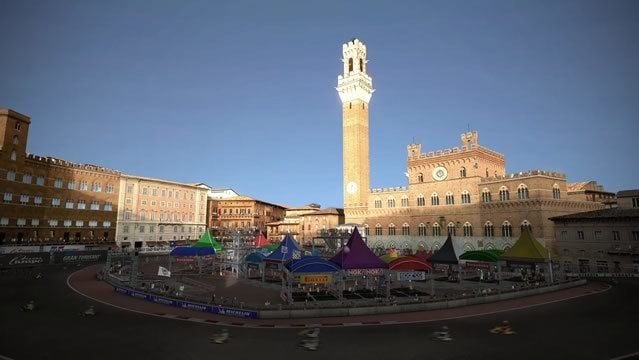 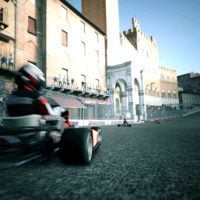 The new karting track revealed in the latest GT5 demo shown off at Gamescom 2010 is now causing problems for Polyphony Digital and Sony Computer Entertainment. The track, named Piazza del Campo after the famous city square in Siena, Italy, hosts a world-renowned horse race twice a year known as the Palio di Siena (you may remember it in Quantum of Solace – ironically a Sony movie). Unfortunately, though, in Polyphony’s digital recreation of the location, they’ve (gasp!) used flags of the local contrada without permission. As reported by Corriere Fiorentino, the city is none too happy about it, and is threatening to take legal action against Sony to prevent sale and distribution of the game in Italy.

While other sites are publishing headlines suggesting this legal scuffle could cause the delay of the game, I don’t see any need for alarm. This is clearly a money-grab for Siena officials, but even if Sony isn’t willing to pay, it seems their demands could be easily worked around by replacing the flags with something less “offensive” and/or re-naming the track (there has to be a reason GT4’s rendition of the Monaco F1 circuit is known as “Cote d’Azur”).

Siena should be careful, though – a little free advertising in a game that will sell millions of copies around the world might not be a bad thing…

Andrew Evans · Aug 23, 2010· Comments
It may be cracking on for a decade old now (yes, really), but Gran Turismo 5 still has a few secrets left to give.

Andrew Evans · Aug 23, 2010· Comments
The Gran Turismo world may be all about GT Sport and esports, but an older title is enjoying a second lease on life right now.

Kyle Patrick · Aug 23, 2010· Comments
No, your eyes do not deceive you. We’re talking about a game that’s fast approaching its ninth birthday. That’s because, thanks to a recent discovery in the community, it’s suddenly gained a huge number of tracks.

Jordan Greer · Aug 23, 2010· 49 Comments
When looking at the GT franchise as a whole, critics frequently rate the most recent games – GT5 and GT6 – as the least successful in the series’ history, for a wide variety of reasons. Those critics might be surprised to find that Kazunori Yamauchi actually agrees with them.

Jordan Greer · Aug 23, 2010· 30 Comments
When Gran Turismo 5 was released, something unusual in the game’s Kyoto Photo Travel Location caught the attention of our community: a curiously detailed little cat. He blinked, turned his head, looked around, and generally drove people crazy.

Michael Leary · Aug 23, 2010· 61 Comments
In a surprising turn of events a new update is available for Gran Turismo 5, version 2.17. This update modifies the game so that it is no longer necessary to connect to the discontinued online servers in order to download previously purchased DLC packages.

Jordan Greer · Aug 23, 2010· 122 Comments
One final update for GT5 has been released, version 2.16. This update modifies the game to function without connectivity to online services, which have now been discontinued.