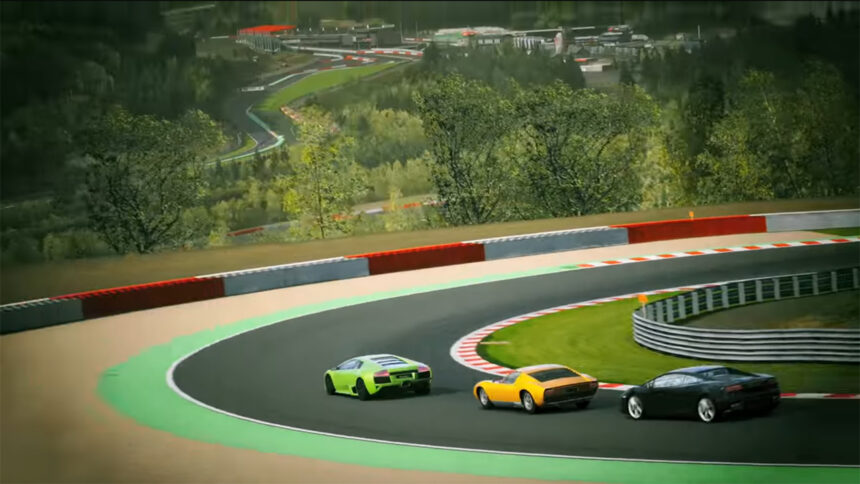 Spa-Francorchamps Is Coming to GT Sport

It’s one of the world’s most famous, most challenging race tracks. Unsurprisingly, it’s also one of the most in-demand tracks among fans of GT Sport. An impasse over licensing seemed to have dashed our hopes of ever seeing it in the game, but it now seems that it’s on the way — and a lot sooner than we’d thought.

Circuit de Spa-Francorchamps, in the Belgian Ardennes, is simply one of the finest ribbons of asphalt in the world. Not only is it home to one of motorsport’s great corners in Eau Rouge/Raidillon, it’s got everything from extreme high speed straights to challenging hairpins, all wrapped up in highly variable weather conditions.

It made its debut in the Gran Turismo series back in GT5, as one of the first ever items of downloadable content. Spa came back for free, and from the beginning, in GT6, and as one of the tracks the FIA certified for accuracy it seemed to be a shoo-in for the FIA-certified GT Sport.

But it never made the transition, and this later turned out to be due to a very expensive sticking point: the price. The fee that the circuit required for licensing its use was in excess of what Sony was willing to pay, and would account for several other circuit licenses.

However, a Tweet from the official Gran Turismo account seems to very strongly hint that Spa is on the way. This Tweet follows on from a post on Facebook yesterday which it seems went public in error, and which the account very quickly removed — although not before some GTPlanet members spotted it:

The clip centers on social media messages from fans to the official GT account wondering why Spa isn’t in the game yet. It ends with a knowingly chin-stroking emoji, rather firmly suggesting that the wait for the track is nearly at its end.

This both tallies with and contradicts some information we already had. There is an unknown track in the schedule for this weekend’s World Tour event, which is usually a solid indicator of a circuit that is waiting its grand debut. GTPlanet is on the ground at the event, and the rumors there were of a real world circuit coming to the game, but one that would be brand new to the series.

Meanwhile, Kazunori Yamauchi has also tweeted that a “long-awaited” course will be coming to the game. That — albeit alongside many others — would be an apt description of Spa-Francorchamps:

We will likely have to wait until the grand reveal this weekend to find out more. It’s safe to say that with the five cars already revealed and wet-weather circuits, next week’s update was already pretty tasty, but if Spa-Francorchamps arrives as well, it’ll be a bit of a beast.

Stay tuned to GTPlanet for more information as we get it.

Spa Francorchamps
361 Comments Discuss this post in our forums...
Test Your Badge Knowledge With Our Car Logo Quiz

Gran Turismo Sport 176 Feb 24 by Andrew Evans
The latest game update for GT Sport has arrived. Weighing in at 176.8MB it is, as expected, not a major content update, but it does bring along some interesting changes…

Gran Turismo 7 255 Feb 23 by Andrew Evans
Gran Turismo fans will have to wait a little longer to get their hands on the next full entry in the series, as Sony has revealed the game won’t make…

Gran Turismo Sport 1323 Feb 22 by Andrew Evans
A new set of GT Sport Daily Races has arrived, and the next seven days will put you in racing action at circuits — real and fictional — around Europe.…

Gran Turismo Sport 176 Feb 19 by Andrew Evans
Somewhat unexpectedly, there’s a new update coming to GT Sport this month. It’ll be the first update to the game this year, following on from the 1.62 update back in…

Gran Turismo Sport 2245 Feb 18 by Andrew Evans
Updated February 20: Since we posted the details below, all corresponding information has been removed from the official Gran Turismo website. We’ll update this article with more information as we…

Gran Turismo Sport 1323 Feb 15 by Andrew Evans
The latest set of GT Sport Daily Races, running for the next seven days, will see you recreating the golden era of rally in a rather unusual event — as…

Gran Turismo Sport 2245 Feb 12 by Andrew Evans
Polyphony Digital has released more information on the scheduling for the 2021 season of the Gran Turismo FIA Online Championship. Although we don’t have a full race calendar yet —…