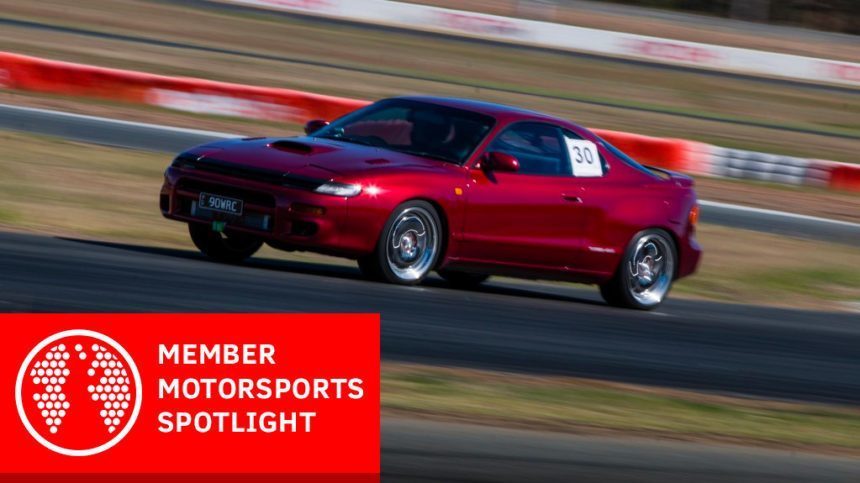 Welcome back to GTPlanet’s Member Motorsports Spotlight. I’m a GTPlanet forum member and sim racer with a passion for real life motorsports. You can read all about my motor racing exploits in the first installation of this recurring series.

Now for something a little different. We’re shifting gears with this, the third GTPlanet MMS, from team-based wheel-to-wheel endurance racing to some of the things you can do on your own with a road car and a bit of spare time. For this week, we’ve interviewed GTPlanet Member Punknoodle, aka Nick Winsor.

You race on sims, and in real life. Which came first?

“I grew up on a farm in Southern New Zealand and didn’t own a PC or console until a long time after I got my license. I used to set up little grass courses out in the paddocks, or my friend’s place. We would also go down to the beach and set up cones there to race each other. So in some ways real racing came first, but I didn’t do any ‘proper’ real racing until after I got into sim racing.” 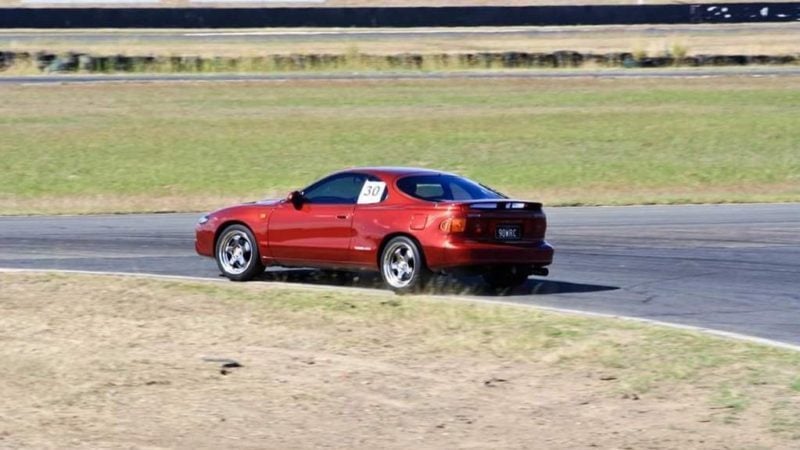 How did you get into real life racing?

“My uncle has always raced cars, campaigning a Holden Torana GTR-XU1 for years. I used to help him in the pits whenever I could. I’ve always been a big fan of watching motorsport, especially the Australian V8 Supercar championship although I never thought I’d be in a position where I could do any racing myself.

“I bought my Celica GT-Four a few years ago, and never intended to do anything major with it. Just to keep it maintained and own it as a nice street car, I’ve always loved the shape of them. I started working more overtime at work, earning more expendable income, so I was starting to spend a little more on the Celica, just keeping it as a street car.

“Meanwhile, I was doing the occasional Circuit and Coffee day at the local track which is basically just cruising the circuit and giving people races down the straights. I found them incredibly frustrating. I just wanted to have the track to myself and to go as fast as I could around the entire track, not just the straights.

“It was one friend of mine who I met through the Celica club and was really in to Time Attack racing that set me off in that direction. I figured I might as well try it out, so I did a Time Attack event in the car. It wasn’t terribly successful.

“I had overheating dramas, braking issues, it was bad. I just didn’t appreciate how much work goes in to making a car reliable for track use. That was it though, I knew what I wanted to do and I had the bug.” 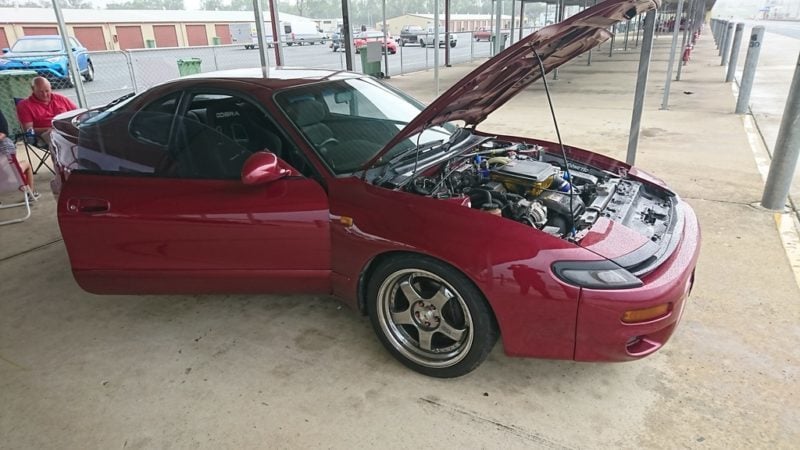 Tell us about your experience on sims. How did you get into sims, what games have you played, which do you play now? Do you race in a specific league or series? Any particular results you’d like to highlight?

“A friend of mine in school bought himself a PS2 when he got a job. It was amazing. We used to play Gran Turismo 3 endlessly. I ended up getting a PS2 myself and bought Gran Tursimo 4. It was such an amazing game. I used the controller, then I went and bought myself a Driving Force EX wheel that I used to have to sit in my lap.

“Eventually I bought a PS3, Gran Turismo 5 and a Logitech G25, and I built my first DIY racing setup. Basically I just went and bought an old car seat, made a frame, bolted the wheel up and played in front of the TV screen.

“I used that for quite a while, then kind of stopped for a while. Quite a while actually. GT6 came out, played it, but it didn’t hold my interest any more.

“One day though, I heard about Assetto Corsa. I built myself a nice gaming PC, bought Assetto Corsa and was blown away by how great if felt. Instantly I was hooked again. I didn’t like cockpit view in the GT games but in AC I couldn’t imagine driving in a different view.

“I ended up building my second DIY setup which I still use today, however I’ve expanded a bit with the triple screen setup. It’s still a fairly modest setup but I think it’s great and I try to get time in it as much as I can, which can be difficult with a busy career and three young kids.

“I still use Assetto Corsa regularly, but now I’m also really in to iRacing and really enjoy the online component. It’s just so addictive and rewarding.” 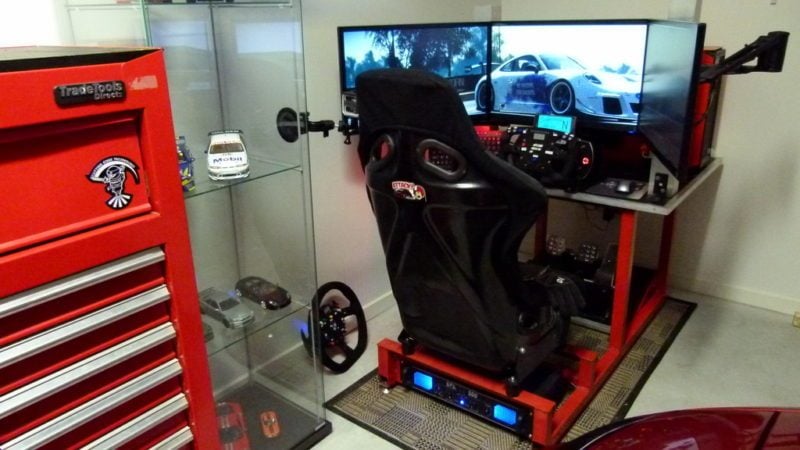 Now I’d like you to talk about your real life racing experience. Which series do you drive in, what is the race format?

“I do Time Attack events in my GT-Four Celica. Basically the Time Attack Queensland calendar varies between two circuits (Lakeside and Queensland Raceway). The format is around six cars on track at once, separated by a few seconds.

“You get six laps, and it’s all about trying to set your fastest laptime. I have goals of developing the car further and potentially entering in to the WTAC challenge down the road in Sydney.”

Can you talk about the tracks have you driven on? Which are your favorites? How many races have you run in total? Any successful results you’d like to talk about?

“I’ve only really driven around Queensland Raceway and Lakeside here in Brisbane. However I was driven around Highlands Motorsport Park in Cromwell, NZ and it was amazing, such a great track. I’m still developing the car and my driving so no big results yet, but I’m really only doing it for my own satisfaction.”

What car(s) you have raced in real life? Do you own a race car, or do you rent from someone? Did you help with the build, do you perform any of the maintenance?

“Well my race car as mentioned is my ST185 Celica GT-Four, which is a 4WD, 2.0-liter turbo. I do most of the work on it, unless I require machining work or major fabrication.

“I really enjoy researching things and trying to design things myself so it’s really a car for testing my own skills and just having fun. I’ve done quite a bit to the car (just check out post #1 of the car’s thread to see the current list).

“I used to be fairly apprehensive about working on it but after working on it with my mechanic friend I’ve learned a whole heap about it and now doing things like swapping a cylinder head is easy so I’m quite proud of that.

“Being an industrial electrician, the wiring of the engine management system was quite simple but designing things like coolant swirl header tanks has been a real learning curve. But I’ve really loved the experience and have always found that working on the car is almost as fun as racing it.” 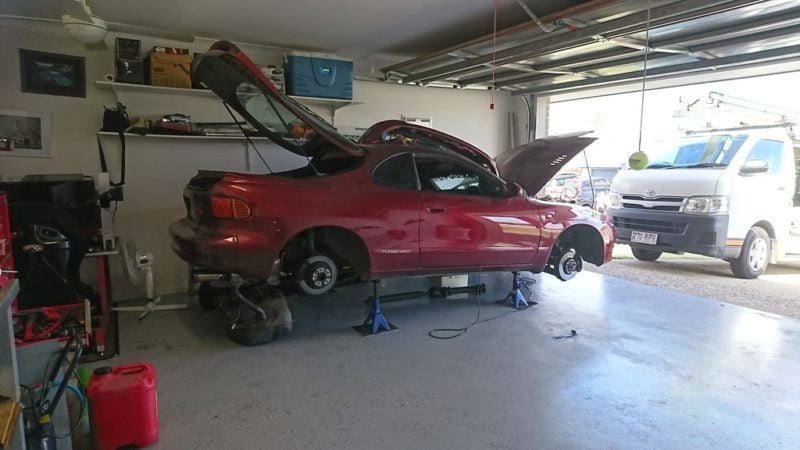 “When I started doing my real life track events, it had been a while since I was really in to sim racing. My driving was OK, but definitely not superb. I got back in to sim racing in my good setup, and my lap times at the real track fell immediately. So I can say without a shadow of doubt that sim racing makes you a faster driver.

“Quite a lot transfers between the two. Obviously the most basic thing that is common is the driving line. The way in which you have to navigate a race track is the same in both sim racing and real racing.

“Another thing though that is common is the way in which you control the car. In a proper sim, you need to flow the car just as you do in real life. I tend to change up between left foot braking and right foot braking depending on the car and situation.

“When driving the family car, which is an automatic, I’ve found myself left foot braking unconsciously whilst driving. Heel toe technique is the same, the way in which you come off the brakes and on to the accelerator is the same, it’s all a very good tool for practicing real racing.”

How about some on board video or pictures of your driving? Or any pics you have of the car build, maintenance, podium celebrations. Whatever you might have.

To wrap up, let’s focus more on the community here. When did you join GTPlanet, and what brought you here? How does GTPlanet help you connect to real life racing, and sim racing? What keeps you coming here?

“I can’t remember how long I’ve been a member of GTPlanet but it was a long time ago. Originally I joined to keep abreast of Gran Turismo news, but I found myself making friends in the Members’ Rides section and other sections of the forum.

“I have a few good conversations going on with some great members here. I love the fact that GTPlanet has evolved in to something much bigger than just Gran Turismo. A lot of motorsport news I get is from the front page, as well as news regarding some of the other great sims available to us these days.”

OK, so one final question. When’s your next race, and how do we keep up with your real life racing?

“Well I have to get the car back together as I’m upgrading it again! But I hope to hit the track soon to give it a shakedown. I always keep my thread in the Members’ Rides section updated with the work I’m doing to the car and any events I do so that’s the best place to follow me. I also have an Instagram account (thedukeofwinsor) and a Facebook page (Duke’s Racecar Engineering).”

Interviews 8 Jul 7 by Andrew Evans
Usually on GTPlanet, we’re looking outwards. As a media channel, we look to conduct interviews with some of the most interesting people in the motoring, motorsports, and racing game worlds,…

Community Spotlight 5 Jun 12 by Andrew Evans
You may recall that earlier in the year Tom Brooks — the voice of Gran Turismo — has decided to try his hand at becoming a racing driver, and film…