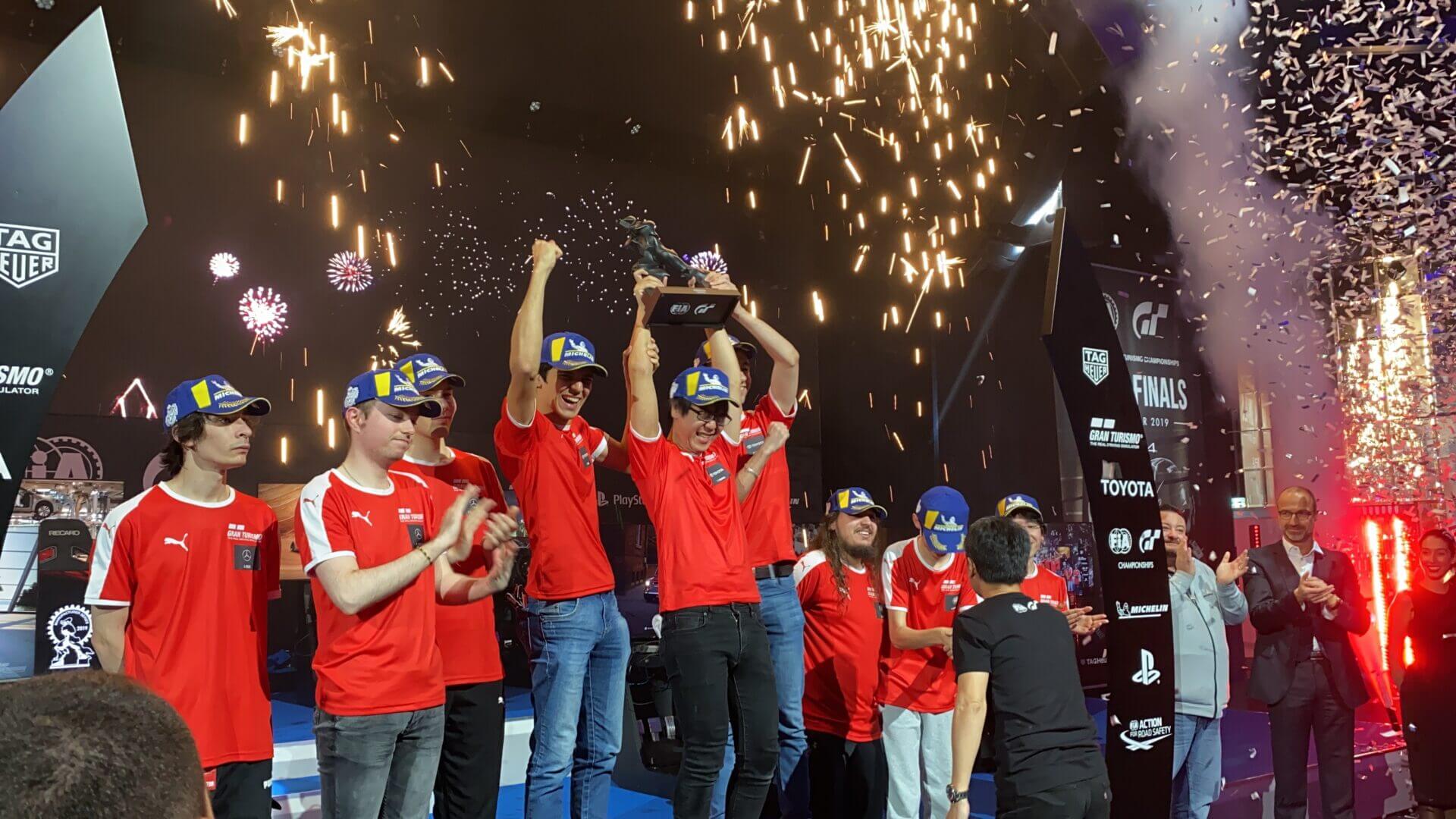 Team Toyota put in an almost perfect performance in the GT Sport Manufacturer Series World Final to claim the trophy for the first time.

The three-man team — Igor Fraga of Brazil, Rayan Derrouiche of France, and Tomoaki Yamanaka of Japan — almost managed a clean-sweep of Saturday evening’s events. Toyota first threw down an unbeatable superpole lap, then won both of the Gr.3 races, and only lost in the Gr.4 race at the new Laguna Seca circuit by 0.062s.

It was an impressive performance that left the other teams in their wake. Only Mercedes-Benz managed to put up a true challenge, winning in that race at Laguna Seca but finishing second in the two other races. 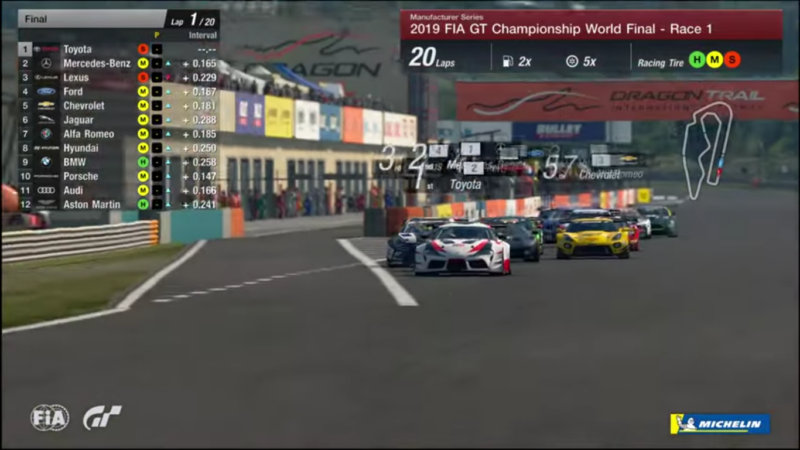 Toyota stated its intention right away with the Dragon Trail race. Starting on the soft tires, Fraga essentially drove away from the cars behind. Lexus, with Baptiste Beauvois at the wheel, was the only other team starting on soft tires, but found itself held up behind the Mercedes-Benz of Cody Latkovski at the start.

With minimum stint lengths of six laps in force, the 20-lap race seemed to have a simple choice of running eight with the fast, soft tire and the minimum six with each of the other grades. Mercedes seemed to be running with a different playbook, as Latkovski started a seventh lap on the mediums, stretching an extra lap running up behind the two lead cars.

For much of the early racing, Hyundai aside, the teams seemed to pretty much hold station. The Korean car seemed not to enjoy the quad-apex ‘Club Corner’, losing out there in the early stages after understeering off, and later spinning on lap seven to fall well off the back of the pack. Just two laps later, Chevrolet joined in, falling off the outside of the track and collecting Porsche — for which the American brand received a two-second penalty — after rejoining the circuit.

Meanwhile Ford was making hay on the soft tires. Adam Wilk moved up past Antony Felix in the Mercedes to take third, with the two-grade tire advantage simply allowing the Australian to outbrake the American.

Toyota and Lexus seemed to simply be in a different class, but they had to contend with the hard tires for the final stint, while everyone else — except Ford and Aston Martin — ran soft options.

With Tom Lartilleux now at the wheel, the Mercedes reclaimed its third position from Ford and set off after Lexus. The Frenchman cut chunks out of the time advantage, catching and passing Adriano Carrazza in the Lexus in the final chicane.

However there was a little too much work to do in the remaining time to catch countryman Derrouiche. Toyota took the win from Mercedes, with Lexus a comfortable third from BMW. 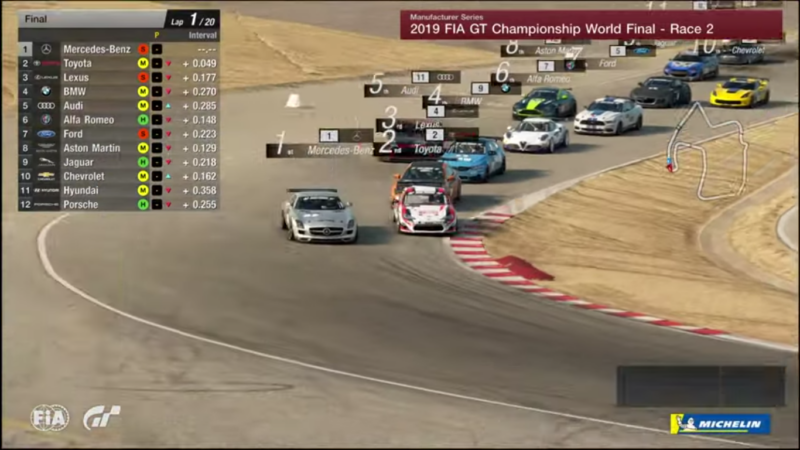 For the second race the action moved from the fictional location in Croatia to the game’s newest — and series’ oldest — real circuit: Laguna Seca.

Toyota and Mercedes had chosen opposed tire strategies to those in race one, and immediately Latkovski was able to make the tire advantage count as he sent the SLS past the GT86 through the elbow at Turn 6.

It wasn’t long before Toyota was losing more places. As the recovering Lexus went to pass the BMW at the Andretti hairpin, the two cars connected. That sent the BMW into Yamanaka’s GT86, which then lost fourth to the point and squirt Audi TT. Despite the fact it seemed to be a late move from Nicolas Rubilar in the M4, the stewards judged Beauvois to be at fault and issued a two-second penalty.

One car on the move up the order was the Alfa Romeo. Alonso Regalado was able to use the car’s light weight to defy a tire disadvantage and outbrake his rivals. Two crowd-pleasing overtakes into the Corkscrew in two laps moved the Italian brand up to fifth.

Mercedes and Lexus were making hay at the front and were able to pit on lap eight and re-emerge first and second. Igor Fraga was busy bringing the GT86 up through the field, passing the BMW of Randall Haywood, only to then have to defend with vigor from Haywood’s countryman Daniel Solis who was continuing to make the little 4C the fastest car through the Corkscrew.

As much of the grid pitted for the soft tires, Andrew Brooks in the Lexus was able to make his own tire advantage work and pass Antony Felix in the Mercedes for the race lead. The duo then stopped for their own final stop, tilting the tire advantage back to Lartilleux in the SLS. He almost immediately made that work with an impressive overtake through Rainey.

However Toyota was still in play on the softs. With three laps remaining, Derrouiche was able to scythe past the Lexus and set off in chase of his countryman.

With the soft tires on the Toyota it seemed almost inevitable that Derrouiche would make it past, but Lartilleux was driving the widest SLS on Earth. Two laps of battle couldn’t get the GT86 past the Mercedes, and the two crossed the line 0.062s apart to tie up the championship. BMW came third, after Coque Lopez came out on top in a three-way battle in the final turn with Shogo Yoshida’s Alfa Romeo and Carrazza in the Lexus. 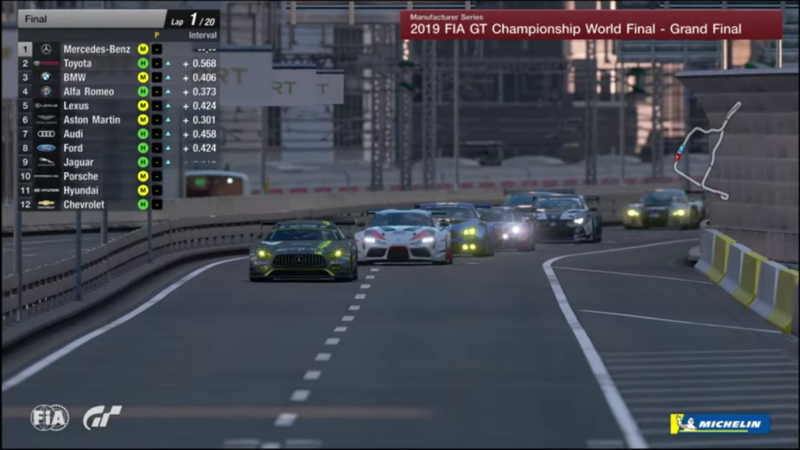 In an unusual tactical quirk, none of the car started on the soft tire. While many of the front-runners chose the medium tire, Toyota ran with the hard option and it didn’t seem to hold them up in the opening stints. In fact Yamanaka passed Latkovski to take the lead early on, as Toyota, Mercedes, Lexus, BMW and Alfa Romeo traded positions.

The slipstream seemed unusually strong, with the top nine covered by barely a second after four laps. With six laps down, the whole field was within a spread of just seven seconds as all but BMW dived into the pits to swap tires. This was a decision that would come back to haunt the Munich brand.

Derrouiche was almost immediately able to make the medium tire work. Catching the slipstream, he outbraked Felix into the triple-right to scamper free. Then the BMW emerged from the pits, just behind the Toyota, but ahead of the rest of the pack. That small act was crucial: the BMW on hard tires acted like a virtual cork, allowing Toyota to pull an instant two-second advantage and break the slipstream.

Thanks to some refueling strategies, a number of cars were out of position up the grid, and with the BMW backing others up there was some serious squabbling keeping the stewards busy. Felix in the Mercedes was in the wars in particular, slipping back to seventh.

Lap 12 saw the entire field stop for soft tires, and any fuel needed for the end. That reset the order a little, as Jaguar, which had been running second courtesy of Vinicius Neto tumbled down. Toyota, however, had a huge, nine-second lead and the title in its grasp.

The misplaced Mercedes started to fight back, as Lartilleux clawed his way back up to second on the road. That ignited a pitched battle for third on the road — and in the tournament. First it was Koki Mizuno in the Chevrolet, before both Aston Martin with Ayumu Takida and Martin Grady in the Audi came past. Running four wide with Alfa Romeo through the hairpin, the Aston collected a sliding Audi and dropped Grady to third last ahead of BMW with a 10s penalty for not meeting tire stint requirements.

But no-one could do anything about Toyota, taking the checkered by a healthy 12 seconds. Mercedes came home second, four clear of Chevrolet in third. Taking fourth was Alfa Romeo, enough to move the brand up into an unlikely and heroic third overall.

Andrew Evans · Nov 24, 2019· Comments
Michelin, official Tire Supplier and Technical Partner of Gran Turismo, is staging a special online competition for players in south-east Asia and Oceania, with an all-expenses paid experience at Yas Marina, Abu Dhabi, for the winner.

Andrew Evans · Nov 24, 2019· Comments
A new set of Gran Turismo Sport Daily Races is now available, with the unannounced change to a four-weekly cycle now seemingly the standard from this point forward.

Andrew Evans · Nov 24, 2019· Comments
Following on four weeks from the last set, a new set of Daily Races is now available in Gran Turismo Sport as players get used to the new scheduling for the 2017 title.

Andrew Evans · Nov 24, 2019· Comments
For the first time in nearly a month, there’s a new set of Daily Races in Gran Turismo Sport for players to enjoy for the foreseeable future.

Andrew Evans · Nov 24, 2019· Comments
It’s the inevitable fate of any game that, once it is succeeded, it will eventually wither away as support is withdrawn. While this process usually takes months at a minimum, GT Sport seems as if it could be sidelined in record time.

Andrew Evans · Nov 24, 2019· Comments
Despite being superseded by Gran Turismo 7, GT Sport’s Daily Races seem to be continuing on their weekly cycle — for the time being at least.

Andrew Evans · Nov 24, 2019· Comments
Although Gran Turismo 7 is now out, GT Sport shows no signs of slowing down any time soon, with a new set of Daily Races now available to players.

Andrew Evans · Nov 24, 2019· Comments
Gran Turismo Sport will finally be superceded by Gran Turismo 7 this week, but there’s still plenty to be getting on with in the current title — starting with a new set of Daily Races.